After Israelis Michael Levitt  and Arieh Warshel won the 2013 Nobel Prize in Chemistry, their decisions to emigrate from Israel to the United States provoked a discussion about the academic "brain drain" Israel has been experiencing. 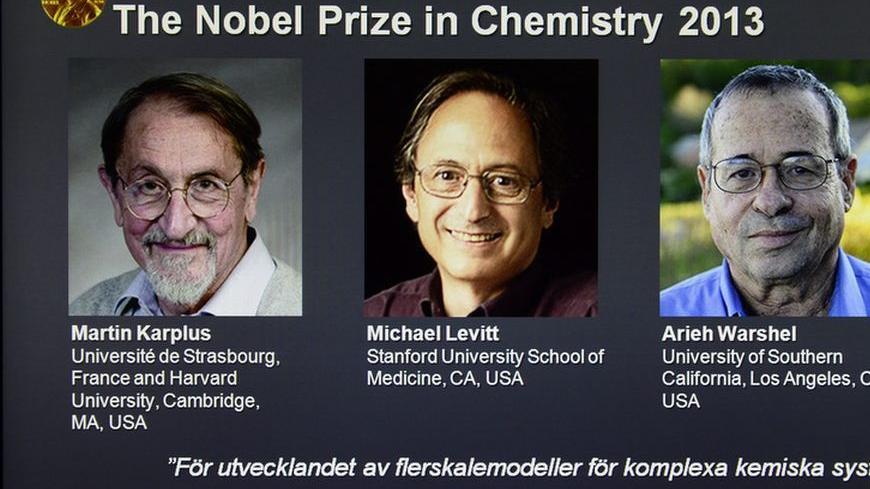 Photos of Martin Karplus, Michael Levitt and Arieh Warshel, the three laureates of the 2013 Nobel Prize in Chemistry, are seen on a screen during the announcement of the winners at the Royal Swedish Academy of Sciences in Stockholm, October 9, 2013. - REUTERS/Claudio Bresciani/TT News Agency

Let’s start with the good news. On Oct. 13 in Israel, more than 300,000 students started the academic year at universities and colleges around the country. In the past decade, the percentage of Israelis accepted into institutions of higher learning has increased from some 20% of the relevant age group to almost 50%. Since the mid-1990s, Israel has ranked third in the number of scientific citations (relative to country wealth) and third in the number of scientific publications per million residents. Since 2000, five Israeli scientists have been awarded Nobel prizes.

From the world’s most prestigious award, we now move to the bad news in the areas of science, research and higher learning in Israel. Two of the three laureates for the 2013 Nobel Prize in Chemistry, Arieh Warshel and Michael Levitt, emigrated from Israel and  make their homes in the United States. Many in Israel regard them as “descenders,” the translation of a term coined in Hebrew to describe those who leave the country. In the outspoken words of retired general Uzi Dayan, they are “traitors.”

The retired general’s declaration on his Facebook page is not sophisticated: “Leaving (descending from) Israel will ever be considered in my eyes as a betrayal of the Zionist idea — the return of the Jewish people to his homeland. I also loathe those who move to Germany. To those who explain leaving because of the economic situation, I remind of the anti-Semite claim, according to which Jews find their home in the place where they feel comfortable. Zionism claims that Jews can be well only in a Jewish state. True, many things here are in need of fixing. But they are to be fixed here only. Anyone can choose where he lives, and I am entitled to give my opinion on that.”

Daniel Barenboim, Pinchas Zukerman, Daniel Kahneman, Haim Saban and thousands of other Israeli musicians, scientists and entrepreneurs who bestow honor on their state — are they all “traitors”?

The timing of Dayan's statement, on Oct. 6, days before the Nobel Prize committee announced the American laureates of Israeli origin, proves that the head of the Israeli national lottery, Dayan, was not blessed with much luck in this case. On the other hand, the coincidence of Dayan’s outburst — and before that the critical remarks by Finance Minister Yair Lapid against Israelis who “descend” to Germany — and the Nobel prize awarded to two Israeli migrants moved the Iranian threat off the Israeli agenda in favor of a discussion about the crisis in Israel’s system of higher learning, research and development.

Official data indicate that the increasing flight of Israel’s finest scientists, mostly due to the lack of research means, threatens the country's security and welfare no less than the unborn Iranian bomb. Israel’s strategic asset, dubbed its “qualitative advantage,” is eroding. Israel has these scientists, who enjoyed generous research and development budgets, to thank for the advanced military means acquired by it throughout its 65 years of existence.

In January, the Central Bureau of Statistics published Families of Israelis Abroad: Who Moves Where?, a comprehensive study edited by Ayelet Cohen-Castro and based on the profiles of 34,000 families of Israelis, some living abroad and others who returned to Israel between 1996 and 2008. They all had at least one child born abroad and had been away for at least one year. The study found that the relatively high rate of emigration to the United States of advanced degree holders is influenced by a lack of positions that would permit their integration and would guarantee them a suitable position among senior faculty in Israeli academia.

The policy of shrinking university staff has also led to a narrowing of the subject matter that universities can offer students and global research that can be conducted, as well as placing a heavier burden on remaining staff. This teaching load makes it harder for researchers to excel in research, a fact that places them in an inferior position compared with researchers from leading universities in the West.

A position paper compiled in April 2012 by Ami Wolenski for the Taub Center shows that Israel’s national expenditure per student plummeted to a third of the expenditure in the 1970s. Public investment in a student in Israel is about half that in the United States ($3,100 annually in Israel compared with $7,200). The ratio of students to senior lecturers has gone up, from 17 in 1990 to 24 in 2009. In several institutions, the ratio is as high as 50. The accepted ratio in the Western world is 10 students for every senior lecturer. The median age of a senior staff member in Israel is 53.5, compared with 46 in 1980. Some 50% of senior staff at universities are over 55 (compared with 32% in the United States and 16% in the United Kingdom).

Jonathan Levav, 37, an expert on marketing and decision making at the top-ranked Stanford University Graduate School of Business, epitomizes the depth of the crisis. Levav, who was made a professor at prestigious Columbia University at the age of 27, is invited to speak around the world about his research, including some he conducted jointly with the internationally renowned [professor of psychology and behavioral economics] Dan Ariely, another “descender-traitor” according to Dayan’s terminology.

“We came to the United States intending to stay here only two-three years,” Levav told Al-Monitor, “then you get married to a local, and then you have kids. Now all of a sudden, life becomes complicated, which means uprooting far from your aging parents and the Israeli experience. I did take a leave from my Ph.D. program to do my military service in Israel, but doing it at 25 meant that I didn't have the same army experience as that of my childhood friends who stayed in Israel. Of course there are good researchers everywhere, but where there is a bigger cluster of researchers, the level of research improves dramatically. If I had my choice I'd live in Israel and work at Stanford, but that is very difficult given the 12,000-kilometer distance.”

The brilliant researcher feels that although Israeli universities cannot measure up to Harvard, MIT, Princeton and other American universities of the same caliber, they can definitely lead the second tier. “Statistics indicate that the relative contribution of Israeli academicians living in Israel is one of the highest in the world. Nonetheless, I fear that this data belongs to the past. It's indicative of how unusual it was for Israelis to settle at universities abroad 20 to 50 years ago. I don't believe that in 20 to 40 years we'll have the same proportion of Nobel laureates coming out of Israeli universities. The level of investment [in research] today cannot match up to what it used to be.”

Levav says that three years ago he considered moving back to Israel, and his wife got an attractive job offer from a venture-capital fund in Israel. “That summer I was at a conference where I sat through a presentation of a decently regarded young Israeli academic in Israel. I remember saying to myself, ‘I'm not sure that I'm ready to walk away from a big-time university to join a place where this would be the level of my colleagues.’ Again, the scholar was nice, competent, etc., but you must see who sits on my hallway in the US. Then you'll understand why it is hard to get excited about an Israeli university. I want to live in Israel — there's a piece of me here in the US that's dead and only comes to life in Israel — but it's difficult to offset the professional differences.”

Levav says that at the marketing department at Columbia, where he taught, there were five other Israeli lecturers and an additional six at the accounting department. “We all bemoan the state of the universities there, and wonder how stupid we'll feel when our parents die and we're still here,” he says.

One of Stanford’s biggest draws for Levav was the large Israeli community there. “My biggest worry here is that my kids aren't getting the Zionist connection that I had and have,” he says.

Naturally, he doesn’t like being called a “descender” and is hurt by the term “traitors” that Dayan dubbed Israelis like him. “Who are we betraying exactly? There are bigger traitors of Israel who live in Israel, if you ask me. At least most of us here serve as great ambassadors for the country.”

President Shimon Peres and Prime Minister Benjamin Netanyahu did well by congratulating the American Israeli or Israeli American Nobel prize laureates. The fruits of the ingenuity of great researchers, as that of great artists, and even that of great sportswomen, are the assets of humanity as a whole. Any reduction in the means laid out at their disposal by the public and any insult to their dignity betrays the honor of the state itself.