Lessons learned from the second Lebanon war, international objections and politics are all playing a part in Turkish Prime Minister Benjamin Netanyahu's decision to postpone a Gaza ground attack. 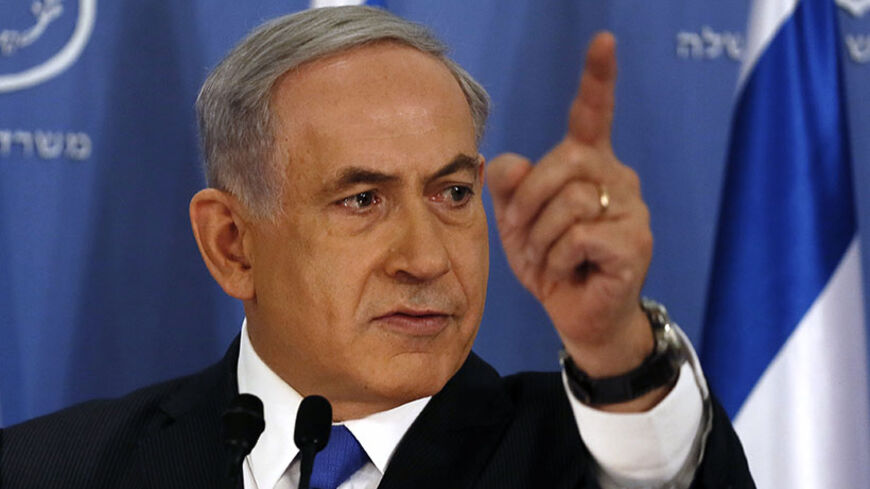 Israeli Prime Minister Benjamin Netanyahu gestures as he speaks during a news conference at the Defense Ministry in Tel Aviv, July 11, 2014. - REUTERS/Gali Tibbon

On the evening of July 10, the third day of Operation Protective Edge, Channel 2 News broadcast a survey of the public's reaction to the conduct of its leadership, especially Prime Minister Benjamin Netanyahu. The poll indicates that most Israelis are not eager for a ground campaign in the Gaza Strip, despite the rocket attacks that have spread to the Tel Aviv area and beyond it to the north. Millions have to seek shelter at all hours and tens of thousands of reservists have been called up by special emergency orders.

According to the poll, 91% of the public support the operation, but only 42% think Israel should send ground forces into Gaza, as opposed to 47% who object. Top marks for their handling of the situation went to Netanyahu and Defense Minister Moshe Ya’alon, who are promoting restraint in the Security Cabinet and have thus far managed to block the demands for a Gaza takeover espoused by Foreign Minister Avigdor Liberman.

For Netanyahu, this is an interesting and positive result, easing the public pressure on him for a ground incursion, which he wants to avoid. Although he is sustaining electoral damage from the right, his power base, he can console himself with his broad public backing.

Netanyahu has said in the past that he is not a great fan of military confrontation. During his two previous terms in office he presented a policy of using force in a measured way, in sharp contrast to his 2006 election campaign, best remembered for the slogan “Strong against Hamas.”

Now, too, when Liberman challenges him in the Cabinet and leads a diametrically opposed and aggressive policy, Netanyahu has been sticking to the approach of restraint, proving that he is not being manipulated by the foreign minister’s threat. Netanyahu is proving resilient, backed as he is by his defense minister and military chief of staff, who would rather put off a ground incursion for the time being.

Netanyahu has in large measure been affected by the conception of former Defense Minister Ehud Barak, his close adviser on defense issues for almost four years, who went with him through the 2012 Operation Pillar of Defense. Barak believes that the countdown to the next confrontation begins at the end of every round, and therefore Israel’s interest lies in spacing them far apart from each other. This concept blends well with Netanyahu’s cautious approach toward the use of military power.

But this is not simply a matter of Netanyahu’s approach or his character, and his hesitance is not necessarily a negative. Netanyahu is operating within a set of military, political and diplomatic considerations that are making him postpone as long as possible the order to enter Gaza. On the one hand, he is very aware of the trauma experienced by the political echelon over the Second Lebanon War in 2006. At the time, Prime Minister Ehud Olmert and Defense Minister Amir Peretz paid a heavy political and public price for a hasty decision to begin a war and enter Lebanon with insufficient preparation, which cost many lives.

Netanyahu does not want to have to defend himself in front of an inquiry commission of the type convened after the Second Lebanon War, to be accused of responsibility for the deaths of soldiers as Olmert was at the time and to pay with his office. On the other hand, Netanyahu also fears a second Goldstone report, which would inflict a diplomatic catastrophe on Israel such as the one that followed Operation Cast Lead in 2008. That is why Netanyahu is not only holding military consultations, but in recent days has also sought the advice of experts on international law.

Are these minefields and the past traumas making the decision-makers hesitate for personal and public reasons and avoid a ground campaign that is needed to significantly hamper Hamas’ military capabilities?

“[Netanyahu] saw how the careers of Olmert and Peretz crashed. They, too, set out with strong public backing before the Second Lebanon War and afterward that same public demanded their resignation,” said a senior Likud figure who wished not to be named. “This undoubtedly has an effect. The problem is that we appear hesitant in the eyes of Hamas. A military power with technological capabilities and the Iron Dome air-defense system fears a confrontation with Hamas. It’s clear that Bibi [Netanyahu] will pay a price in the right for this hesitation, especially with Liberman challenging him now,” he said. “There have been reports since [July 9] that the troops are ready to enter Gaza. Hamas is shooting at Tel Aviv but Netanyahu is unwilling to take a risk. It doesn’t look good. This campaign doesn’t have any achievement or victory photo so far.”

“I don’t accept all this analysis regarding the trauma of the Second Lebanon War that’s affecting Netanyahu,” says former Knesset member Danny Yatom, who onced headed the Mossad. In a conversation with Al-Monitor, Yatom backed the restrained approach adopted by the prime minister and defense minister. “Netanyahu and Ya’alon are right. First of all, the air force is doing a very good job, inflicting very painful blows on Hamas, so there’s no reason to go into Gaza. Secondly, once you go in with ground forces, you increase the friction with Hamas and there’s an increased probability of collateral damage. Thirdly, as long as it’s not necessary to put boots on the ground, you avoid the death of soldiers, and that is also a consideration.”

More of the interview follows:

Al-Monitor:  And what is the red line that if crossed, would leave no choice but to go in?

Yatom:  If Hamas does not stop shooting within a few days, there will be a ground incursion. But today the rockets have a long range and are being fired from everywhere in the Strip, so that all of Gaza is one big launchpad. To get to the rockets you have to conquer the whole Strip and stay there instead of Hamas for a long time. That’s certainly a consideration.

In general, my sense is that the wars in which military maneuvering turns the tide, like the 1967 Six-Day War, the 1973 Yom Kippur War and the 1982 First Lebanon War, are over. In the war against terror, it’s preferable not to have a ground assault. There’s an understanding that when there’s no danger to the state, there’s no reason for such an invasion. This is a case in which less might is right.

Al-Monitor:  Is Netanyahu not overly hesitant?

Yatom:  I don’t see hesitation, I see considered reasoning. From my experience, when the prime minister and defense minister are very experienced, they always act according to the recommendations of the military echelon. That’s how [former Prime Ministers] Yitzhak Rabin and [Ehud] Barak acted, and I have the impression that Netanyahu, too, is acting that way. I worry about a situation in which our side takes a heavy hit, with many casualties, and that will generate furious public and political anger and force a ground incursion. I want to believe that the political echelon learned the lesson of the Second Lebanon War and what happened in the Olmert government — which went into battle unprepared, and when they eventually launched a ground operation it was too late, with insufficient troops, and we had numerous casualties.