In an interview with Al-Monitor, Ophir Pines lamented that the left has not challenged Israel's right-wing government on the diplomatic and defense fronts, but said a historic opportunity lies ahead for regime change. 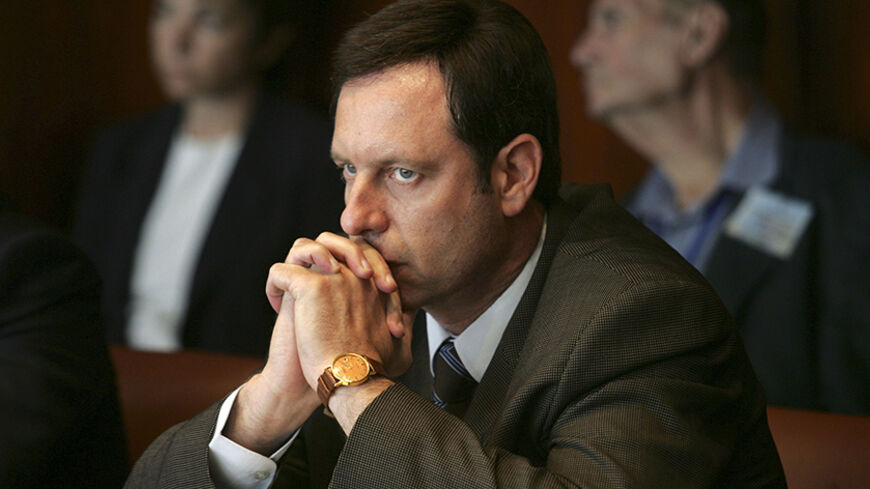 The Jewish tenants who moved into 25 apartments in the East Jerusalem neighborhood of Silwan on Sept. 30 really irked former Labor Party Minister Ophir Pines. Not because it was a provocative move by the right wing designed to make it hard to divide the city; there have been similar actions in the past. What upset Pines is the silence of the center-left parties.

Pines — who remembers very different days of activism by the peace camp and a leadership that knew how to shape an alternative — uncharacteristically decided to write a finely honed, painful and critical post on his Facebook page. He signed off with this message: “There once was a peace camp in Israel, but no more.”

Few Israeli politicians have given up a ministerial position for reasons of ideology and values. Pines is one of them. In 2006, when he was viewed as a rising star in the Labor Party and on the left and served as minister of science, culture and sport, Pines resigned from Ehud Olmert's government after Avigdor Liberman came on board as deputy prime minister. In 2010, he left the Knesset after failing to convince his party to remain in the opposition rather than join the right-wing government headed by Benjamin Netanyahu. Therefore, unlike others, when Pines calls on Justice Minister Tzipi Livni and Finance Minister Yair Lapid to quit the government, he has the moral standing to do so.

In an interview with Al-Monitor, Pines painted a grim picture of the left, which in his opinion has capitulated to the flowering of the right. He also said, however, it is not too late for leaders on the left to take stock and present alternatives to the current regime.

Al-Monitor:  It’s obvious that your words came straight from the heart. Why were you so outraged?

Pines:  I look at the way the Israeli right operates and manages to cynically promote its goals, which are well defined: to go into the Arab neighborhoods of East Jerusalem, take over houses and push the Arab population out of its neighborhoods. On the other hand, the Israeli left, or what once was the peace camp, is paralyzed, is in shock. These are very painful things, in my view, very dangerous, that could do grave damage to Jerusalem’s delicate fabric of life.

There were times when the right tried to do such things that it came up against strong objections from the left. Such provocations were not allowed to get by. Not on the legal front and not on the political one. Today, everything goes.

There’s an attempt by the Israeli right to determine irreversible facts on the ground that will make it impossible to establish two states. We know this, and the question is why do we agree to this. Why do we shut our eyes and let it happen?

Al-Monitor:  Do you understand the source of this weakness?

Pines:  I say that the new Israeli left has abandoned its diplomatic-defense agenda and retains only the social one. I think this is not only reckless, or a fatal mistake that perpetuates the rule of the right in Israel, but it could also create a binational state with undemocratic characteristics. There’s a kind of surrender on the part of the left, which does not want to confront the current diplomatic situation and prefers to engage in social issues — a fight that is of course very just, but also much easier, politically.

I was a member of the Knesset. I know it’s much easier to go to the Israeli public demanding social justice than to demand two states for two people. The right has managed to give the left a bad name and turn it into a dirty word, and instead of dealing with this, they run away from this political left stamp and focus on the social issues. But that absolutely cannot be the only flag of the Israeli center-left.

In the past, the Labor Party and the left were successful in creating a broad consensus for their positions, even during times of horrible terrorist attacks like those in the days of Prime Ministers Yitzhak Rabin, Shimon Peres and Ehud Barak. In those days, there was a struggle over public opinion. If we, all the parties that believe in peace, keep leaving the diplomatic arena to the right, and don’t offer solutions, the alternative will not be sufficiently viable.

Al-Monitor:  What does this situation mean, in the long run?

Pines:  I look at the political map and as of now, I see a very serious struggle between the right and the extreme right. I see a fight within the Likud or between the Likud and Yisrael Beitenu and HaBayit HaYehudi, with lots of arguments. On the other hand, I don’t see the Israeli peace parties in this argument.

Al-Monitor:  Maybe the public is fed up with the diplomatic process since the collapse of Oslo and the second intifada.

Pines:  Indeed, since Barak’s peace conference at Camp David, there’s disappointment with the ability to make peace, ours as well as that of the Palestinian leaders. The first person to say there was no partner for peace was Ehud Barak, when he was prime minister [1999-2001] on behalf of the peace camp, and later Prime Minister Ariel Sharon, who carried out a withdrawal [from Gaza in 2005], not based on a peace agreement but as a unilateral step.

All these things lead to a chicken and egg question: Did the public veer to the right or did the leaders take them there? After all, Netanyahu wisely never formed a purely right-wing government because he always wanted to have a fig leaf from the peace camp with which he could conduct policy. There’s always someone who joins a right-wing government and provides it with legitimacy and serves as a fig leaf.

Al-Monitor:  Is there any way to fix this?

Pines:  For things to change, people have to understand that running away from dealing with the diplomatic issues means giving up as far as presenting an alternative to government. Anyone who doesn’t fight for the future of Israel on the defense and diplomatic fronts is, in fact, saying that he accepts Netanyahu as the next prime minister, too, and maybe Economy and Trade Minister Naftali Bennett will challenge Netanyahu and run against him. Anyone who thinks they can convince the people of Israel to support the peace camp with only a social agenda is mistaken big time.

Pines:  It’s not like everyone on the right is uniting, and that’s not what it’s about. Bringing down Netanyahu will be possible first and foremost by not accepting his way and confronting him in that arena. Every day that Justice Minister Livni, Minister for Environmental Protection Amir Peretz, Knesset member [Amram] Mitzna and Finance Minister Yair Lapid, and Knesset member Ofer Shelach and all the folks there remain in the Netanyahu government, it means they agree with his way and with everything he does. That is, playing for time and failing to make peace. They have to leave the coalition over the diplomatic issue. I left a government when Liberman joined because he and I don’t have even the lowest of common denominators.

I’m the last person to blame the public for moving to the right. It went there because the left did not fight for its principles and its policy, and because the left has been part of right-wing governments for years.

Al-Monitor:  Is all lost?

Pines:  I actually think there’s a historic opportunity, because I think Netanyahu is past his prime. I think the Israeli public understands that Netanyahu is driving on empty. There’s a very real opportunity to win the next elections and to change the regime, but as long as the lesson of the last elections is not learned, it won’t happen.

Al-Monitor:  Can Isaac Herzog lead the left to victory?

Pines:  I believe so. I like the fact that his is a participatory leadership, I’m tired of loud, macho leadership, which has led us nowhere. I think he should show the Israeli public that there is a different style and a different way, different ideas, that there’s an alternative.