The Iraqi opposition conference held in Jordan put the kingdom in an awkward position with Iraq's prime minister, but some in Iraq called for considering its resolutions because they reflect actual Sunni demands. 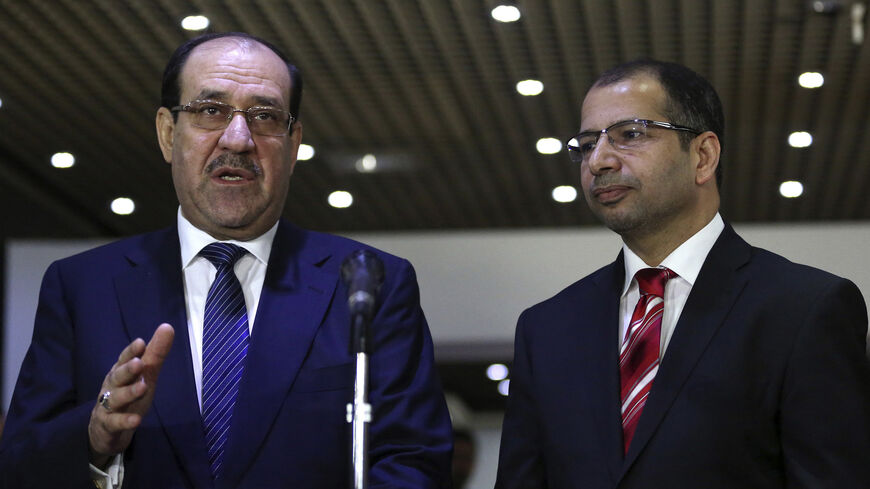 In his weekly speech delivered July 23, caretaker Iraqi Prime Minister Nouri al-Maliki appeared as if he had lost a regional ally. On July 15, the Hashemite Kingdom of Jordan allowed 150 opposition Iraqi figures from various religious, tribal, armed and Baathist factions to convene a two-day conference in Amman. The participants called on the international community to “end its support for the current government” and “back the people’s revolution and its demands.” Jordan was thus been transformed into a host for figures who strongly oppose Maliki, among them the businessman Khamis al-Khanjar, who backed the 2013 demonstrations in Anbar.

Iraqi reactions to the conference were sharp. Some parliamentarians suggested that the government sever economic ties with Jordan and withdraw its preferential prices for oil exports. Others described the conference as an attempt to undermine the political process in Iraq, which prompted the Foreign Ministry to recall Baghdad's ambassador from Jordan for consultation.

Despite a number of participants proclaiming the Jordanian government’s sponsorship of the conference, Amman categorically denied doing so. In this regard, Jordanian author and journalist Mohammad al-Fadeilat told Al-Monitor in a phone interview, “Jordan was endeavoring to appease Iraqi anger about Amman’s hosting of a conference of revolutionary forces that called for the toppling of outgoing Prime Minister Nouri al-Maliki.”

The conference was held amid a deteriorating political and security situation in Iraq, with tensions mounting between the Baghdad central government and the Kurdistan Regional Government and with Sunni factions rebelling against the government. This situation led to the fall of a number of Iraqi cities to militants of the Islamic State (IS) and allied armed tribal factions and former members of the constitutionally outlawed Baath Party.

The conference represented a new development on many levels for the factions opposing the Maliki government. None of the Sunni personalities or parties taking part in the Iraqi political process were in attendence, yet numerous Sunni lawmakers called afterward for considering some of the conference resolutions, which reflect the demands of the Iraqi Sunnis who have become a problem for the Maliki government, which they continually describe as “sectarian.”

The conference could be viewed as the embodiment of the 13 demands raised by demonstrators in four Sunni provinces in 2013. Maliki’s government never took the demands seriously or made an effort to address them, leading to matters further deteriorating on the ground. The struggle came to a head in the Hawija incident in April, when 54 demonstrators were killed.

It appears that an understanding cannot be reached between any Maliki-led government and opposition members who assert that they were “forced to defend themselves with weapons.” The closing statement of the conference considered the removal of “Maliki as a prelude to any future political process to save Iraq.”

Meanwhile, on July 23, Maliki expressed his regret that “we are seeing on television screens a conference of blood mongers who embrace sectarianism and terrorism, meeting in a brotherly neighborly country, with which we have strong friendly ties.” He also said that he hoped that “Jordan’s position vis-à-vis the conference would reflect the friendship and relationship that exists between the two countries.”

In addition, Fadeilat, who attended the conference in his capacity as a journalist, stated, “The Kingdom of Jordan is concerned about losing the oil privileges offered by its easterly neighbor. But it is finding itself in a difficult situation as it tries to appease Maliki without repudiating the conference, which received official Jordanian support in a clear show of political bias against the Maliki administration, and the danger of the latter falling under the control of the Shiite crescent [Iranian influence], decried by the Jordanian monarch.” Fadeilat also concluded, “Prior to defining its future relationship with Baghdad, Jordan awaits the results of the Iraqi political process in light of the events on the ground.”