Liberman positions himself as Mr. Security

By denouncing Prime Minister Netanyahu for not retaliating against the rockets fired from the Gaza Strip, Foreign Minister Avigdor Liberman positioned himself as a responsible political leader who is assertive about security. 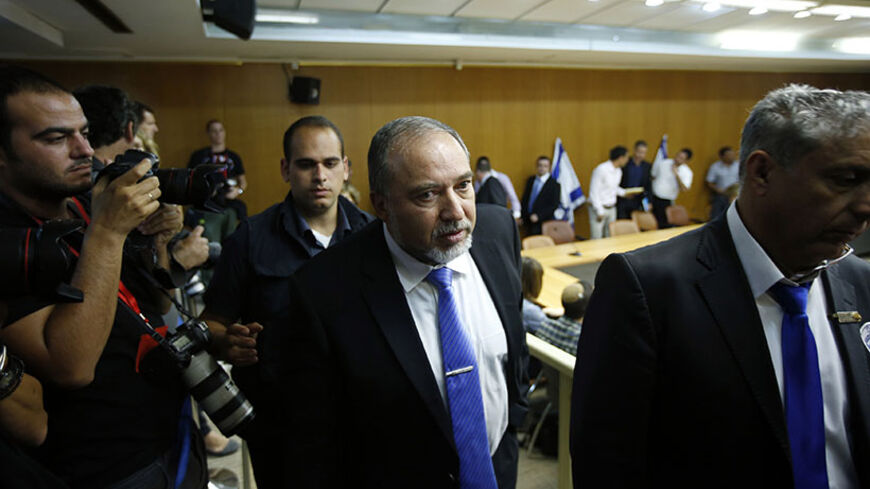 While the BBC was reporting on July 4 that a cease-fire between Israel and Hamas would take effect in a few hours, Foreign Minister Avigdor Liberman and the members of his Yisrael Beitenu Party were touring the southern, shelled town of Sderot. His visit, which received extensive media coverage, ended at a local coffee shop. Sitting there in a plain plastic chair, surrounded by curious local residents, he fired off a litany of complaints directed right at Prime Minister Benjamin Netanyahu's soft underbelly.

“The approach of 'quiet will be met with quiet' is very seriously mistaken, and I can say on my behalf and on behalf of the members of Yisrael Beitenu that we completely reject such an approach,” said Liberman in an obvious effort to paint Netanyahu as a weak leader who is afraid of a confrontation with Hamas. “It is unacceptable that after three of our children were kidnapped and murdered and after two consecutive weeks of rockets falling, Israel's approach would be that quiet will be met with quiet. … We in Yisrael Beitenu oppose to the cease-fire. There are no arrangements to be made with Hamas.” His stern remarks were more reminiscent of an attack from the opposition than the comments of the country’s foreign minister during a military escalation. These remarks more or less coincided with comments made by Minister Yair Shamir during an interview with Al-Monitor.

Three days later, Liberman convened a news conference to announce that his party’s partnership with the Likud was over. It turned out that his attacks on Netanyahu's restrained policy, as framed during his visit to Sderot, were just a well-planned opening salvo in a much larger plan of Liberman to distance himself from Netanyahu. It was a strategic political move, which in many ways set the current agenda for the Yisrael Beitenu Party and its leader in advance of the next elections. Liberman may not have quit the coalition, but what he did hardly strengthened it. If anything, it set off a stopwatch for its demise.

Netanyahu is a prime minister with no real allies in his coalition. He is threatened by Economy and Trade Minister Naftali Bennett on the right, and now by Liberman, with both men advocating a more forceful, violent operation in the Gaza Strip. From the center-left he is challenged on socioeconomic issues by Finance Minister Yair Lapid. All this, when contrary to previous years, Netanyahu does not have the Iranian nuclear agenda to cling to.

With considerable political savvy, Liberman picked the worst possible time, as far as Netanyahu is concerned. By advocating a relatively restrained policy toward Hamas, the prime minister is already being portrayed as someone fearful of escalation. Now Liberman lashes out and insinuates to the Israeli public in less than delicate terms that the prime minister is a coward. The Yisrael Beitenu Party head is fully aware that breaking away from Netanyahu right in the middle of a security crisis could subject him to harsh criticism, including claims that he is acting irresponsibly. On the other hand, he also assumes, and rightfully so, that no one will remember this before long.

The fight that broke out between Liberman and Netanyahu before the stunned ministers who attended Sunday’s Cabinet meeting should not be considered the reason why the foreign minister announced that he was seeking a divorce from the prime minister. The separation would have happened anyway. The squabble during the Cabinet meeting was just another specific event in a process devised by Liberman himself. The chairman of Yisrael Beitenu came to the Cabinet meeting with a ready-made script. He concluded that Netanyahu would not let him get away with the very public ambush that he had prepared for him in Sderot two days earlier. He would want to make it absolutely clear that he is the prime minister.

So, when Netanyahu said, “At moments like this it is incumbent upon us to be level-headed and responsible and not to react with rash provocations,” Liberman fired back, “You were the one who held press conferences after the funeral and started sloganeering, without anything to back you up.”

What followed was even more embarrassing and received even more media coverage. Liberman continued with his separation plan the next day. While the residents of the south were still under fire, and the children of Sderot were still running in and out of their shelters, Liberman appeared before the press in a state of utmost serenity to announce that the partnership between Yisrael Beitenu and the Likud was over. “The truth is that the merger didn’t work in the elections, it didn’t work after the elections, and there are still quite technical problems with it. But when these technical problems become matters of principle,” he continued, “there is no reason to hide it.” He then went on to say that he has no intention of pulling his party out of the coalition.

Liberman’s description of the events is accurate. Running together with the Likud may have been what brought Netanyahu to the prime minister’s office and Liberman to the Foreign Ministry, but when it comes to the number of seats that they won, joining forces was a failure. Together they got just 31 seats, far less than either party expected. In practical terms, the attempted merger between Yisrael Beitenu and the Likud never really bore fruits, and meetings of the joint faction often appeared like some bizarre hybrid of two unrelated species. Senior members of the Likud were worried that Liberman was trying to steal their party out from under them, while Liberman discovered that the merger weakened him electorally.

Although he was acquitted in his trial and returned to the Foreign Ministry, Liberman was losing ground among his own electorate. He could clearly and longingly see Bennett’s growing popularity among right-wing voters and rightfully felt that without a distinct agenda of his own, he would lose his own hold on that particular electorate. He knew that what he needed more than anything was a relevant new agenda, which would distinguish him from Netanyahu and the Likud, while at the same time showing right-wing voters why he is preferable to Bennett.

By the evening of July 7, while reports of Israeli mobilization for a military operation intensified, it was discovered that Liberman’s own efforts had earned almost immediate political benefits. He was being portrayed as the person who pushed a reluctant Netanyahu into a show of Israeli military force in Gaza. In fact, the foreign minister had nothing to lose. If Netanyahu continued being hesitant, Liberman could distinguish himself from him and portray himself as a security-minded pragmatist. He would be seen as a leader who understands the importance of Israel’s strategic alliance with the United States and suggests peace initiatives of his own, but at the same time as someone who hits the Arabs where it hurts. No combination is more appealing to the political center of the Israeli public. At the same time, Liberman could also distinguish himself from Bennett in the battle over votes from the right. Though his approach appears forceful, it also has a veneer of experience and respectability. In other words, it lacks Bennett’s puerile provocations.

Liberman is now in the midst of a political process that has only just begun, but which will take him to the next elections as head of an independent party with a security agenda that is fully in accord with the polls that he had most probably conducted. He believes that there will be four or five mid-sized parties after the next elections, and he will head one of them. Since he will no longer be committed to Netanyahu, Liberman will be able to join a bloc of parties that could prevent the prime minister from forming another government. If that happens, that political bloc could, under certain circumstances, be what allows Liberman to be the one forming the next government.