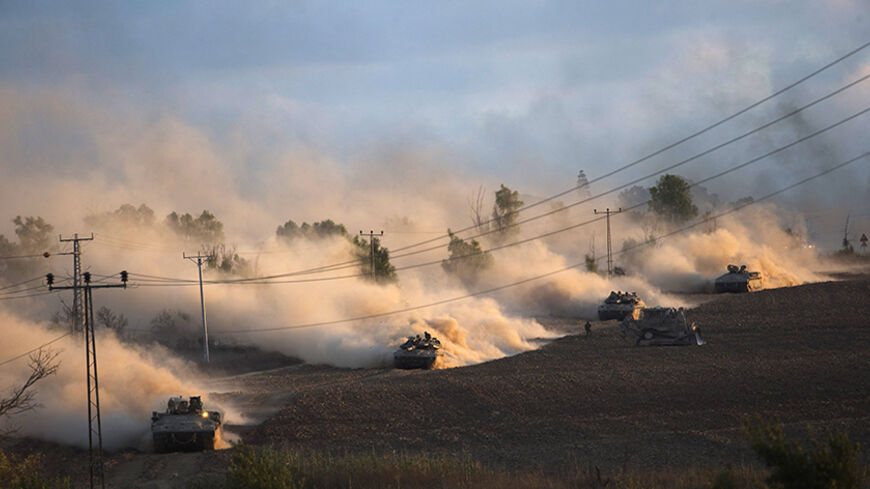 Israel was dragged into Gaza by the hair.

For 10 days, Benjamin Netanyahu, one of Israel's most militarily restrained prime ministers, did almost everything he could to end this round of hostilities without a ground incursion into Gaza. Waiting and pausing, he debated and weighed his options until he found himself at a dead end. The negotiations in Cairo bogged down. The Egyptian-brokered cease-fire was honored only by Israel while Hamas continued its fire as usual. And what about the humanitarian lull? It was the exact same story. During said lull, Hamas continued to fire rockets while attempting to stage a terrorist attack via an explosive tunnel.

At one point, almost everyone — the Egyptians, the Americans and the Europeans (but with the exception of the Turks and Qataris, who obviously regard themselves as Hamas' allies) — had come to the realization that there was no other choice. Hamas simply wants Israel to incur into the Gaza Strip. What does it know that we don't? Has it reached the conclusion that the only way for the organization to survive and ensure its economic future, given that it has gone bankrupt in recent months, is by blood and fire?

For 10 days, Hamas fired more than 1,000 rockets at Israeli towns, including Tel Aviv and its greater metropolitan area. Luckily for Israel, it enjoys an impressive and unique technological development of its own making — the Iron Dome anti-missile defense system — which has allowed its citizens to live through this trying period with "only" one fatality. But I have yet to see another world leader who would take it lying down when a terrorist organization makes a habit of firing rockets on a daily basis at his country's main metropolis and most densely populated region. What would Russian President Vladimir Putin do if the Chechens fired 1,000 rockets at Moscow? What would Turkish Prime Minister Recep Tayyip Erdogan do if the Kurds did the same thing and fired rockets at Istanbul? It seems to me that even US President Barack Obama — the "hippie-turned-president, to our great disaster," as a senior advisor in Jerusalem described him this week in a closed discussion — would launch a military operation if al-Qaeda fired hundreds of rockets at New York City.

But Netanyahu did not, hoping that the current round of hostilities would end with just airstrikes and a new set of understandings, similar to the ones that concluded Operation Pillar of Defense in 2012. Yet his hopes were dashed. The diplomatic effort failed.

Very senior members of the Israeli cabinet this week laid blame on the Americans, accusing them of making a decisive contribution to this failure. "This is not the way to run affairs in the Middle East," one of those officials said. "The American conduct allowed Hamas to understand that there was an alternative to the Egyptian track." The following is how the official, who has been closely monitoring the developments, described what happened:

A diplomatic race between two mediation tracks evolved. There was the Egyptian track on one hand and the Qatari on the other.

The Egyptians received economic backing from the Saudis, the United Arab Emirates as well as others in the Persian Gulf. This economic backing was required in order to solve Hamas' cash shortage and ensure its continued economic viability. In tandem, Qatar set up its own Turkish-backed track. Hamas clearly opted for the latter, because Qatar is an ally that funds its terrorism, pumping up the organization's spirit via Al Jazeera, whereas Turkey is a Muslim Brotherhood state — a party that sees itself as a Hamas affiliate.

At one point, the Egyptians arrived at the conclusion that it was time to put forward their cease-fire proposal, having gotten the support of the Arab League's foreign ministers. One of the mistakes they made was to consult with [Hamas senior official] Mousa Abu Marzouk, who was in Cairo, rather than with Khaled Meshaal, the political bureau chief, in Qatar. Embracing the 'take it or leave it' approach, they issued a 12-hour ultimatum. Egypt presented its cease-fire proposal and everyone was requested to abide by it. This is where the Americans stepped in. Although US Secretary of State John Kerry backed the Egyptian track, he did, however, say that if that track failed, there were other alternatives. That's a serious misstep. This statement let Hamas think that it could spit in Egypt's face and still have other options. And that's exactly how the events unfolded. Hamas' military wing totally ignored the cease-fire, Hamas lashed out bluntly at the Egyptians and then the whole thing simply collapsed.

On July 16 and 17, almost everyone arrived in Cairo, hoping to somehow succeed in closin the deal. Israel dispatched its Shin Bet director Yoram Cohen, director of the diplomatic-security bureau of the Israeli Defense Ministry Amos Gilad and Netanyahu's special envoy, attorney Yitzhak Molcho. But Hamas hunkered down, making impossible demands. It was obvious that nothing could be jump-started. The whole thing was stymied. Hamas continued to fire rockets at Israeli towns at a deadly pace. For his part, Netanyahu continued to take flak from right-wing elements in his government (chiefly Foreign Minister Avigdor Liberman, who called in a news conference and publicly leveled scathing criticism at the premier). In the end, the die was cast.

On July 17 at 10 p.m., when the IDF invaded the Gaza Strip, the Egyptian Foreign Ministry issued a rare, blunt and possibly unprecedented statement, asserting that since Hamas rejected the cease-fire proposal, to which Israel had agreed without any condition, Hamas would be held fully accountable for any Palestinian killed from that moment on.

Egypt plays a major role in this war. One of the reasons that prompted Hamas to engage in its bizarre rampage is that Egypt regards the organization as a sworn enemy. The main charge in the indictment sheet against Mohammed Morsi, the ousted president, was the fostering of ties with Hamas and relaying information to it. Egypt has completely blocked the contraband tunnels between its side of Rafah and the Gaza Strip. By doing so, it fully and definitively cut off Hamas' lifeline.

When Palestinian President Mahmoud Abbas announced that he had no intention of paying the salaries of some 40,000 Hamas civil servants in the Gaza Strip, it was abundantly clear that Hamas was finished. Having been flanked by both Israel and Egypt, given a cold shoulder by Ramallah and ignored by almost the entire Arab world, Hamas has come to realize that it was not about to crash but rather sink quickly into history's garbage can.

"Hamas has been corralled," a senior Israeli minister told me this week. "It realized it was just a matter of time before it was brought to its knees. The smuggling of weapons into the Gaza Strip has almost completely stopped for the first time since the IDF pulled out of Gaza. Money is running out, too. Most of Hamas' demands have nothing to do with Israel. But the only way for it to raise hell and turn the table upside down is to fire rockets at Israeli towns — which is exactly what it does. It is the military wing that pushes for it. Gaza's strongman right now is Mohammed Deif, who replaced Ahmed Jabari. If it were up to the political leaders who are hiding in a tunnel under al-Shifa hospital, this round would have long ago ended. But the military wing decided to double down and drag Israel inside, hoping that the higher the flames rage, the more motivated the world in general, and the Arab world in particular, would be to help Hamas and save it."

Between the cease-fire that wasn't and the humanitarian lull, Hamas still tried to start a massive, strategic terrorist attack to secure a "victory photo." In that incident, Israel was luckier than it was smart. Contrary to previous reports, Israel did not have prior knowledge about the tunnel through which 13 Hamas terrorists penetrated Israel. The tunnel, which blew up July 8 at Kerem Shalom and which was also intended to mount a strategic terrorist attack, had been in the crosshairs of Israel's intelligence. The latest tunnel was not. On July 17 at 4:30 a.m., the terrorists emerged from the tunnel. Luckily, the exit point was located in an open field. An IDF surveillance lookout spotted them. If the terrorists had exited inside the nearby community, just a few dozen meters away, in a backyard or an area that was not covered by the lookout, this incident would have ended by claiming the lives of dozens in kibbutz Sufa as well as a few Israelis kidnapped and taken to the Gaza Strip. If that had been the case, we would have more than likely seen the IDF barreling down the streets of Gaza. with both side sustaining heavy casualties.

At present, the IDF is operating only on the outskirts of Gaza. What we are seeing is a limited ground incursion for a specific purpose — namely, removing the threat of the tunnels. This is a strategic threat, which at any given time can generate deadly terrorist attacks against Israel. The objective is to expose and detonate all the tunnels that were dug and built in recent years, after intensive engineering work with Qatari funding. Hamas has two strategic arms against Israel. One is the rockets, which for the time being face an appropriate response from the Iron Dome. The second one is the tunnels. Hamas knows full well that what shakes Israel out of its serenity is a kidnapping. By using the tunnels, Hamas can wreak destruction and death as well as carry out abductions for the price of one. The current operation in the Gaza Strip is expected to last for several days and put an end to such an eventuality — namely infiltration into Israel via a tunnel — for at least the next few years.

A word of caution, however: At any given moment, something can go awry (or succeed, from a Palestinian viewpoint), turning this limited operation in Gaza into an all-out war. It seems to me that it would be in the interest of all the parties concerned if this were not the case.