The magnitude of the Hamas tunnel network was not correctly assessed by the military and caught Israel by surprise, after which the Security Cabinet approved the ground operation, wishing the international community understood Israel's need to eradicate this threat. 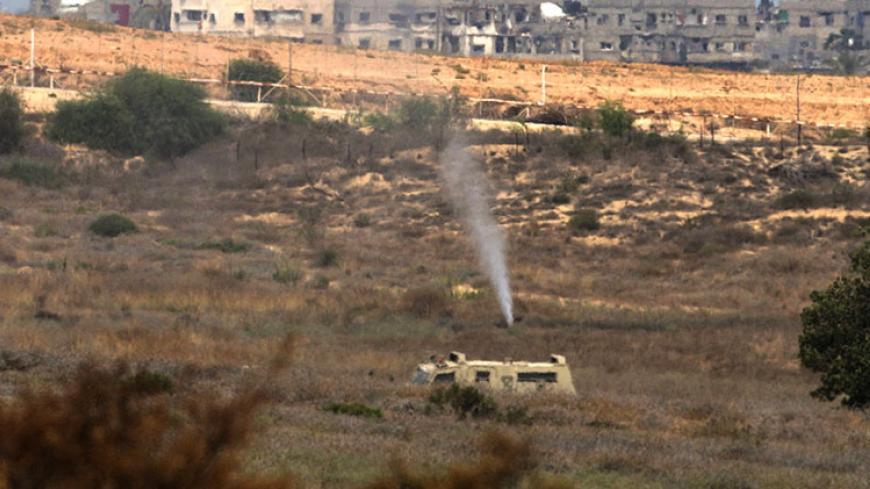 Gas deployed by the Israeli army gushes out of a hole in a tunnel during an operation to search for tunnels dug by Palestinian militants, just outside the Gaza Strip, July 22, 2014. - REUTERS/Baz Ratner

Apparently, there is no way to avoid the creation of a commission of inquiry once Operation Protective Edge is over. The commission will have to discuss what Israeli cabinet ministers are describing as a “resounding security failure.” Why didn’t Israel mark the threat posed by the Hamas tunnels as a strategic threat, as is now so obvious? Why didn’t it devote thought, effort, budgets and attention to this threat, just as it did to the rocket threat, which received an appropriate response in the form of the Iron Dome air-defense system?

The commission of inquiry will have to investigate three distinct tiers of questioning: Did the security forces have intelligence about the tunnels? If so, was it relayed to the political leadership? And if it was relayed, why didn’t the political leadership act accordingly? It should be remembered that had Hamas not rejected the Egyptian cease-fire initiative, Israel would not have discovered the scope of this threat, and Hamas would have continued digging and expanding its tunnel network, right until the moment it was deployed.

One senior Cabinet member I spoke with this week described that possibility to me: “Imagine," he said, “that we are in the middle of a conflict with Hezbollah up north. Our top-notch infantry brigades are up there, in the north, when suddenly Hamas deploys its network of dozens of tunnels all at once. Some 2,000 Hamas commandos suddenly burst out of them and embark on a killing spree, slaughtering thousands of people in the cities and towns across Israel’s south, from Sderot through Ashkelon, Netivot and Ofakim, maybe even all the way to Beersheba. Who would stop them? The police? The air force? It would take weeks to clean up the mess, and at the end of the entire process, we would find death and destruction across southern Israel. I know,” the minister continued, “that it sounds like a figment of the imagination, but based on what we are discovering these days, the scenario is far more realistic than it is imaginary. In this region, the reality easily exceeds anything we can imagine.”

What originally led to Israel’s ground assault in Gaza was the tunnel near Kibbutz Sufa from which 13 Hamas commandos emerged. They were seen coming out of the tunnel by scouts in an Israel Defense Forces observation post. Video of the ensuing battle, which took place that same morning, aired on all of Israel’s TV networks. The commandos can be seen coming out of the tunnel dressed in IDF uniforms, with all of the standard equipment, with body armor, camouflaged helmets and toques (knit caps) and an enormous amount of weapons. They crawled across the ground together, performing together rolls and rescue maneuvers, until, apparently, they suddenly heard the motor of one of the IDF’s unmanned aircraft or the ignition of a tank that was turned on in the sector by accident, and they raced and pushed themselves back into the tunnel. An IDF aircraft fired a few rockets, but not all of the commandos were hit.

The film footage shocked Israel. Suddenly, everybody realized how permeable Israel’s border wall along the Gaza Strip really is, how much we had been living for the past few years beside a barrel of gunpowder on the edge of a volcano. Even ministers Yair Lapid and Tzipi Livni, who did not support a ground incursion until that morning, withdrew their opposition, clearing the way for the operation to begin. At first, it was said that it would take three days to clean out the tunnels and destroy them. Now they are already talking about three weeks. This is not some effort to win time. It is an effort to win lives. Israel believed before that Hamas had three strategic tunnels. The current estimate is that there are 30, and perhaps a lot more.

As this piece is being written, an end to the ground operation in Gaza seems to lie far in the future. Efforts by US Secretary of State John Kerry to bring about an end to the fighting are not bearing any results. Hamas is not interested in a cease-fire. It is interested in prolonging the fighting, which is costing hundreds of residents of the Gaza Strip their lives, because the organization is well aware that this is the only way to break through the international blockade. It is the only way for Hamas to get past the dead end that it has reached as a result of its behavior over the past few years.

So they continue to fight. What helps them along is the realization that Israel will restrain itself and not dare “go all the way.” Prime Minister Benjamin Netanyahu may be a big talker, but he is somewhat less of a doer. He will not have the courage to sacrifice the necessary lives (about 200 soldiers according to one estimate) to conquer Gaza. He is worried about complications, he recoils from international pressure and he has difficulty making decisions. That is why what we have now is a paradoxical situation verging on the absurd: Israel is desperate for a cease-fire, and Hamas is thumbing its nose at it. The entire international community (except for Egypt) is desperate for a cease-fire, and Hamas is thumbing its nose up at it. The strongest, best equipped and most powerful army in the Middle East is completely submerged in Gaza, fighting a hopeless war against a guerilla army that is carefully concealed and camouflaged, well-trained and unwavering. But the outcome remains unresolved because Israel’s political leadership is afraid of any complications, afraid of casualties and afraid of international public opinion.

I write this as a journalist who is identified more with the Israeli left. Throughout my journalistic career, I supported, and continue to support, all of the peace plans, from Oslo to the Geneva agreement. In order to resolve this conflict, I am prepared to give up the occupied territories (with territorial swaps), East Jerusalem (although, like all Israelis, regardless of who they are, I will not agree to the return of the refugees to Israel), everything. I would do all that on the condition that there is someone with whom that peace agreement could be signed.

It seems to me that we are at the stage that the world is wising up to Hamas. Given the international community’s support for Israel, which was not taken for granted, it seems to me that the world has already internalized that this was a war between good and evil, between a culture of life and a cult of death. Hamas is the Islamic State, IS. Hamas is Jabhat al-Nusra. Hamas is Ansar Beit al-Maqdis. They are all products of the same school: the oppression of women, the expulsion of Christians, a war of annihilation against the Jews. Some of the aforementioned groups even slaughter Shiite Muslims, solely because they are not Sunnis. This is not some figment of the imagination. It is not a delusion. These are firm facts that any child can find on YouTube.

The facts are that even after the current conflict began, Israel agreed to a cease-fire and Hamas refused. It is piling up the people of Gaza as a defensive shield for the means of destruction that it is acquiring wholesale — and then complaining that Israel is killing civilians. On Wednesday, July 23, three young Israeli paratroopers were killed when they entered a booby-trapped house in Beit Hanoun in the Gaza Strip. The US Army would have flattened the house from the air. The Russian army would have flattened the entire town from the air. Let’s not even talk about what the Syrian army would have done, because that’s something of a sensitive issue these days. In contrast, the IDF informs civilians that it is coming by way of text messages and phone calls and even by firing warning shots. Hamas responds by firing rockets at a field hospital that Israel set up in Gaza, where Palestinian civilians were being treated.

No, I am not saying that Israel made no mistakes or that it has been free of errors. Not everybody in Israel wants peace. The behavior of Netanyahu, particularly in his dealings with Palestinian President Mahmoud Abbas, a moderate, has been strongly criticized here by me and in many other places, too. He has been criticized severely, and he will continue to be criticized. But in this war we must not get confused. This is a war between the Sons of Light and the Sons of Darkness.