The Israeli leadership estimates that the cease-fire initiative of US Secretary of State John Kerry responds well to the interests of Qatar, Turkey, Hamas and its own interests with Qatar — but hardly addresses Israel's security needs. 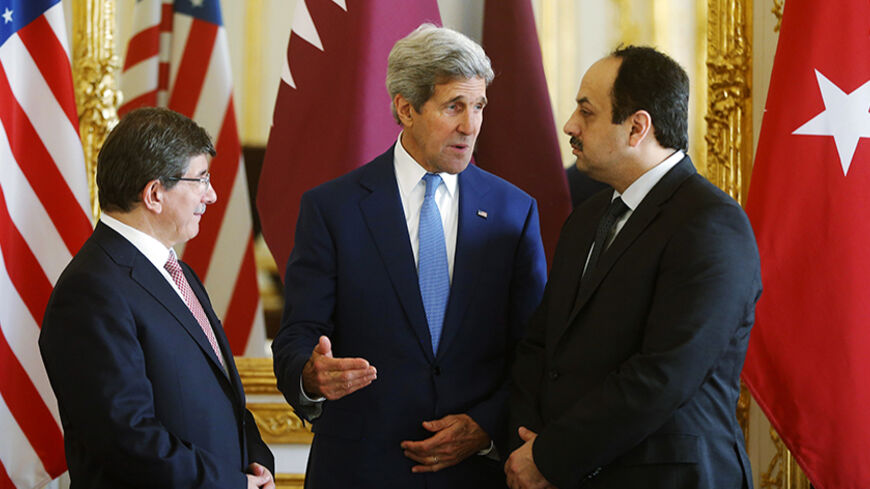 US Secretary of State John Kerry (C), speaks with Qatari Foreign Minister Khaled al-Attiyah (R) and Turkish Foreign Minister Ahmet Davutoglu before they make statements to reporters during their meeting regarding a cease-fire between Hamas and Israel in Gaza, in Paris, July 26, 2014. - REUTERS/Charles Dharapak

The sense of security which Israelis felt until two weeks ago came tumbling down with a crash.

Residents of Israel's southern communities who have been reporting for years that they were hearing digging noises at night are now living in an inconceivable, nightmarish reality. To date, the Israel Defense Forces (IDF) have unearthed 31 tunnels, but there is concern that the number runs much higher. Worse, even once all the tunnels are ostensibly exposed, there will always be that lingering possibility that one or two still remain. That alone is enough to spell catastrophe for the Israeli home front.

Before noon on July 28, five Hamas terrorists burst out of one of these tunnels, not far from kibbutz Ein Hashlosha. Their element of surprise was impeccable. This tunnel had already been tracked down by the IDF and had been taken care of from the Gaza side. As a result, it was “checked off” from the list of effective tunnels. In IDF jargon, the tunnel was “cleared.” But it was anything but “cleared.” The five terrorists emerged from the tunnel with total surprise, killing five IDF soldiers and seizing, according to Hamas, the rifle of one of the Israeli fatalities. Then they fled. Only one terrorist was killed while his four comrades returned via this so-called “cleared” tunnel.

But there's more to this story. In northern Israel, too, along the Lebanese border, residents have been reporting for years that they could hear digging noises at night. In the north, the terrain is much less amenable to digging than in loess [sediment of sand and silt] — the common soil in the south of Israel. But if the North Koreans were able to dig tunnels through granite, so can Hezbollah's Secretary-General Hassan Nasrallah. It's all a matter of function and time. Why do they hear those digging noises especially at night? It's because the relative quiet at night augments your auditory sense. Incidentally, an interesting fact that was gleaned from the Israeli defense establishment is that women, more than men, report hearing digging noises at night. It turns out that women have a heightened auditory sensitivity in the wee hours of the night. Women are attuned to hearing their children sleeping in an adjacent room, whereas men tend to dive right into a deep slumber.

Until two or three weeks ago, the women who were complaining about the digging noises were thought to exaggerate or “imagine” things. By now it has become clear that they did not. Even 22 days after the start of Operation Protective Edge, where dozens of Israeli soldiers have already been killed in this ongoing stagnation in Gaza, Israel still faces a threat to which a solution has yet to be found.

The most difficult problem of Prime Minister Benjamin Netanyahu these days is that he has already maxed out on the limited international credit he had, having wasted the precious time in which a decisive outcome in Gaza could have been reached. Furthermore, other Israeli prime ministers in similar situations always had Washington by their side. This was the case during the Second Lebanon War, Operation Cast Lead (2008) and also Operation Defensive Shield (2002). In all those pivotal events, there was an American president who backed Israel, bought it time, defended it at the UN Security Council and in other forums so that the IDF could complete its mission.

This time around, however, that's not the case. Perhaps even the opposite is true. The cease-fire proposal made by US Secretary of State John Kerry was unanimously rejected by the Israeli cabinet on July 25. The rejection left the secretary and his entourage totally dumbstruck. From that point on, a diplomatic crisis — perhaps an unprecedented one — unfolded between Israel and the United Sates.

It came to a crescendo with a double climax on the evening of July 27. A senior American official held a conference call with Israeli journalists during which he expressed displeasure, disappointment and perhaps even anger at the offensive and baseless statements made against John Kerry and his endeavors. "These were highly offensive allegations," he said. And at exactly the same time, President Barack Obama called Netanyahu and demanded that he reach a cease-fire immediately.

A very high-ranking Israeli official — a member of the security cabinet — recapped for Al-Monitor the chain of events in this agonizing affair. What emerges from this recap is the frigid shoulder that the American administration has been giving Israel at its most difficult moments. On the other hand, we can't blame it. For the past five years, Netanyahu has been systematically sabotaging his relations with Obama, showing, among other things, his unwavering support for his Republican presidential rival Mitt Romney.

The Israeli premier was actively involved in the campaign to oust Obama during the American presidential campaign. He endorsed business mogul Sheldon Adelson who put down $100 million to this end. Netanyahu also appointed Ron Dermer, a staunch Republican, as his ambassador to Washington. Dermer continues to attend functions held by Adelson ahead of the next attempt to remove Democrats from power. Given this state of affairs, Netanyahu made his own bed and now he's lying in it.

“The diplomatic efforts began with the Egyptian initiative,” the senior Cabinet source recounted the chain of events. “Israel accepted it in full. What it meant was an unconditional cease-fire, after which everything was to be put on the table. The Egyptians made it clear that the Rafah crossing would remain closed to Hamas, which they consider to be an enemy. However, they would have no issue with opening the crossing if it were manned by Palestinian Authority officials.

“Toeing the line with Israel," the source reported, "the Palestinian Authority also accepted this initiative, as did Jordan. The Egyptians also got the go-ahead from the Arab League. The entire moderate Arab world went along with the Egyptian initiative, except for Hamas and its patrons from Qatar. The Turks, who also represent the Muslim Brotherhood party, sided with the Qatari proposal. What we saw was a power struggle within the Arab world; the moderate Arab world pitted against those countries that still serve the Muslim Brotherhood. It was clear to us that the Americans would go along with us. It's the right thing to do. It makes sense and it's called for.”

Well, Israel was in for a surprise. The first surprise was reported exclusively in my article here about two weeks ago, July 18, titled "Israeli Cabinet members blame US for failed cease-fire." "What happened," the cabinet source recounted, "is that John Kerry did back the Egyptian initiative but also added that if it did not work out, there were other options. In other words, he let Hamas understand that there was something to talk about and that the Americans would allow Qatar and Turkey to run the show. Kerry's statement is what unleashed all the problems."

"According to our view," the Israeli source said, "there's no room for protection money. We have no intention of paying for a cease-fire. If they want quiet, they have to stop shooting. The lever Qatar has over Hamas should have been used, but not in the way Kerry chose to do it. What should have happened was for the Qataris to convey a message to Khaled Meshaal, Hamas' political bureau chief, that his conduct was unacceptable. No one was going to accept dictates from him in lieu of stopping the rockets on civilian communities. The Americans didn't do that."

Off the record, Israelis list the many vested American interests in Qatar. In addition to the big American naval base there, there are also mega-arms deals in the pipeline. "The American concept is misguided," an Israeli source has said. "The Americans behave as if they are Qatar's envoys, instead of it being the other way around. If the Americans had told the Qataris that they were calling off the arms deals unless Qatar set Hamas straight immediately, this whole thing would have long been over. But the Americans did the exact opposite."

“What the Americans did,” the Israeli source continued, "is to take the Egyptian initiative and add all the demands featured in the Qatari initiative. What they were trying in fact to create is a mechanism that would fund Hamas government the day after a cease-fire was brokered. They were doing this despite knowing full well that transferring or laundering money for Hamas is considered a criminal offense in the United States. We're still shocked by this conduct,” the source said. “How could the Americans,” the source added, "have turned overnight into collaborators at the command of Qatar, Turkey and Hamas? In the initial drafts that were published, they barely mentioned the issue of the tunnels. They talked about ‘security’ in vague terms, ignoring the Israeli need to eliminate [the threat of] the deadly tunnels.”

“I went over Kerry's proposal,” the senior source said, “and I was shocked. It had a whole list of things that had to be discussed. The word ‘security’ was inserted toward the end by way of a generality. The strangest and most upsetting thing was the reference to an oversight mechanism with the participation of Qatar and Turkey. Yes, the only elements missing from this equation were Turkish Prime Minister Recep Tayyip Erdogan and Al Jazeera.”

On July 25, as the Israeli cabinet was deliberating and looking ashen-faced at Kerry's initiative, the secretary of state picked up the phone to talk with Netanyahu. Justice Minister Tzipi Livni was in the room with Bibi (Netanyahu). According to sources, Netanyahu handed the phone over to her. “Listen,” said the Israeli justice minister, who is considered the staunchest supporter of peace in the Israeli government. “I'm looking at your proposal and right now I regret that I'm not Khaled Meshaal. He gets everything he wants. He gets a generous payment for a cease-fire, which strengthens the extremists and weakens the moderates. There is no response here to our security demands and to our right for self-defense.”

It was agreed that the parties would continue to talk. A few hours later, as noted, the cabinet unanimously rejected Kerry's proposal. To save the face of the beleaguered Kerry, a briefing was held on July 27. Since I attended that briefing, I think that the objective was not accomplished. Kerry is a well-intentioned man, Israeli officials are saying, but for the time being the results leave a lot to be desired. The facts speak for themselves. Truth be told, Netanyahu isn't the most popular figure in Washington. Yet in these times, Israeli cabinet ministers are saying, we expect Obama and Kerry to draw a clear distinction between the bad guys and the good guys; between peace-seekers and death-seekers; between zealots and moderates; between democracy and Islamic theocracy. Unfortunately, we have been proven dead wrong.