Israel and Egypt have accused Turkey and Qatar of sabotaging efforts to reach a cease-fire in Gaza so they could then present themselves as mediators. 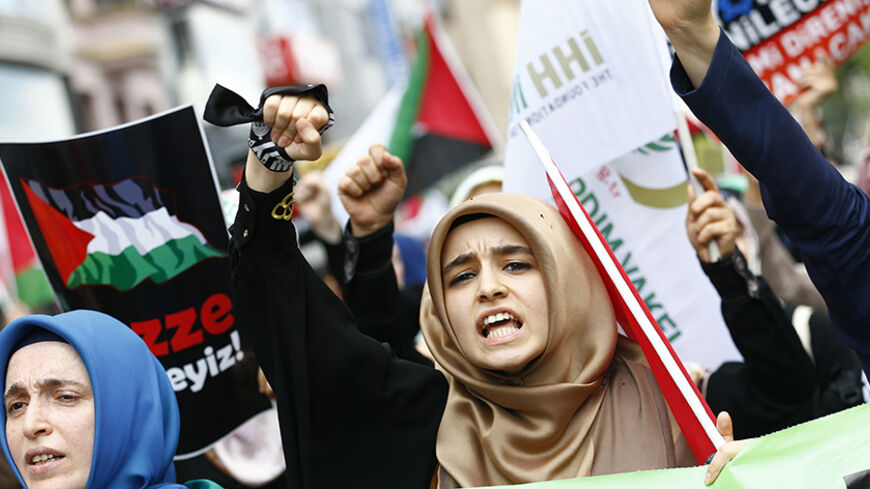 Pro-Palestinian demonstrators shout slogans as they protest Israel's military action in Gaza after Friday prayers at the courtyard of Fatih mosque in Istanbul, July 18, 2014. - REUTERS/Murad Sezer

The Israeli ground offensive launched on the night of July 17 against Gaza has killed any chance that Turkey and Qatar will be involved in high-wire Middle Eastern diplomacy, as might have been the case previously, in the effort to draft a cease-fire agreement between Israel and Hamas. Turkey and Qatar at one point constituted an axis of regional diplomacy that also proved to be effective in resolving the problem of selecting a president in Lebanon in 2008, ultimately resulting in Michel Suleiman becoming that country's 16th president following a months-long deadlock. The process of restraining Iran’s policies and Ankara presenting itself as a counterweight to Tehran in 2008 signaled the emergence of Turkey as a regional player projecting soft power, in contrast to its traditional image associated more with militant “Prussian” stereotypes than a benign and benevolent actor.

One of Turkey's most striking diplomatic achievements was to cut a deal between Israel and Syria in 2008 for the resumption of bilateral talks. Israel’s notorious Operation Cast Lead against Gaza (from December 27, 2008 to January 18, 2009), which took more than 1,000 lives, ended Turkey's string of successes. Turkish-Israeli relations suffered after that and were further damaged by the May 2009 Mavi Marmara incident that cost the lives of Turkish nationals off the coast of Gaza. The deterioration of Turkish-Israeli relations was then followed by the disruption of relations between Ankara and Damascus in the wake of the turmoil that engulfed Syria after March 2011. Bilateral relations quickly devolved into adversity and hostility after the fall of that year. Ankara-Baghdad relations also shared the same ultimate fate.

The defining moment sealing Turkey’s diplomatic isolation in the Middle East arrived with the removal of Mohammed Morsi from the Egyptian presidency and the Muslim Brotherhood from power in July 2013 in a coup led by Gen. Abdel Fattah al-Sisi. While Saudi Arabia and the United Arab Emirates had been staunch supporters of Morsi and the Brotherhood’s removal, the government of Turkish Prime Minister Recep Tayyip Erdogan has been vocal in refusing to recognize the legitimacy of Egypt's new power configuration.

The events in Egypt not only saw a seemingly irreconcilable Turkish-Egyptian rift develop, but also inflicted considerable damage on Turkey’s standing in the Arabian Peninsula and the Gulf. Only Qatar remained close to Turkey, but the Turkey-Qatar axis lost its former diplomatic appeal. With the 10-day air-war between Israel and Hamas, however, there emerged a faint possibility for a revival of a role for the axis. After Israel's acceptance and Hamas' rejection of an Egyptian proposal, the idea of Turkey and Qatar playing a role in a long-lasting cease-fire was floated. From a realistic point of view it did not sound particularly plausible, and the Israeli ground offensive made it impossible.

On July 16, Israeli sources referred to a report in the Saudi-owned daily al-Sharq al-Awsat that said that there is a tendency in Hamas “which would now like to see more mediation and the involvement of other parties, such as Qatar and Turkey. It would like them to oversee the cease-fire alongside Egypt.” It was also reported that “An Israeli security official told journalists Monday that Hamas was divided between its local leadership in Gaza, which inclined toward a cease-fire, and its overseas leadership, which opted for continued confrontation.“ The Israeli official said that Qatar and Turkey had to that point played only marginal roles in attempting to end the exchange of fire.

Before Operation Protective Edge, Hamas leader Khaled Meshaal had called Erdogan, reportedly requesting that he intercede with Israel and prevent it from launching a military operation in Gaza. Erdogan, who will host Palestinian President Mahmoud Abbas in Ankara on July 18, called the Israeli operation “state terrorism.”

A joint Turkish-Qatari initiative in conjunction with Hamas was confirmed July 17 by Qatari-owned daily al-Quds al-Arabi in the following report: “Exclusive sources revealed to al-Quds al-Arabi the existence of a Turkish-Qatari agreement to support the Palestinian demands in the Gaza Strip and work conjointly on drawing up a new initiative that would secure a truce and the lifting of the Israeli siege of the Strip, in light of the dissatisfaction of both sides with the Egyptian cease-fire agreement in the Gaza Strip. According to the source, who requested anonymity, Turkish Prime Minister Recep Tayyip Erdogan and Prince of Qatar Tamim Bin Hamad al-Thani held a closed and unannounced meeting on Wednesday afternoon, hours after another meeting held between the two leaders at the headquarters of the Turkish premiership in the capital Ankara.”

Nonetheless, the chances of a Turkish-Qatari role were slim even without a ground campaign into Gaza. The very low chances for a Turkish and Qatari role in a cease-fire were indicated by the harsh remarks of Israeli Foreign Minister Avigdor Liberman, who on July 16 accused the two countries of sabotaging the cease-fire proposal that Egypt had drafted earlier in the week. During a visit by Norwegian Foreign Minister Borg Brende, Liberman said that Turkey and Qatar had been pressuring Hamas not to accept the Egyptian proposal so they could promote themselves as mediators. After the collapse of the proposal, Egyptian Foreign Minister Samih Shukri joined Israel in blaming Turkey and Qatar.

High-level Egyptian and Israeli accusations of a “Turkish conspiracy” blocking a cease-fire may not be factual, but the two declarations clearly reflect the intention of the two regional protagonists to deny Turkey any role in the Palestine issue. Al-Quds al-Arabi reported, “American Secretary of State John Kerry contacted Qatar and Turkey to arrange a new initiative that would secure a truce between Israel and the Palestinian resistance, pointing to the American administration's realization of the size of the gap between the current Egyptian regime and the Palestinian factions, especially Hamas."

Kerry, who despite a lot of hard work could not sustain talks between Abbas and Israeli Prime Minister Benjamin Netanyahu, is not likely to find a role for Turkey and Qatar in the current Gaza debacle, especially after Israel launched its ground offensive. The situation surrounding Gaza further accentuates Turkey’s regional solitude, or rather, political ineffectiveness. This is unfortunate for the Palestinians.