Iraq events cause Hezbollah to go on full alert

The fall of western Iraq to the Islamic State of Iraq and al-Sham (ISIS) has cut the contiguous bridge from Iran to Lebanon, and Hezbollah fears that ISIS may try to sneak through to Lebanon. 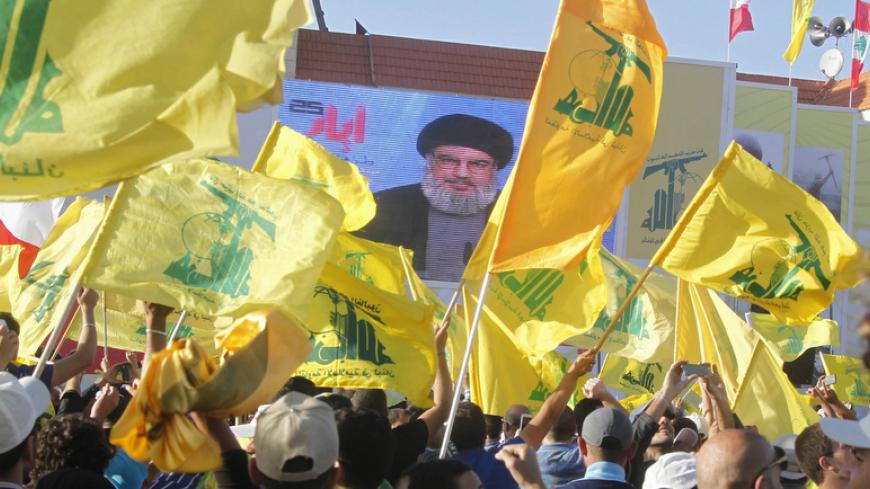 Residents watch Hezbollah leader Hassan Nasrallah on a screen during his televised speech at a festival celebrating Resistance and Liberation Day, in Bint Jbeil, May 25, 2014. - REUTERS/Sharif Karim

Sources close to Hezbollah stressed to Al-Monitor that the party is fully focused on assessing the possible consequences on Syria and Lebanon of events related to the Islamic State of Iraq and al-Sham (ISIS), which now calls itself the Islamic State.

The leadership of the primary and strongest Shiite organization in Lebanon and the region has, over the past two weeks, embarked on studying the facts of what happened in northwest Iraq — how it happened and its direct and indirect causes — so it can take precautions, according to the sources.

The sources have enumerated the internal causes of the collapse in Iraq. They recognize the fragility of the state that was built in Iraq after Saddam Hussein’s fall, as well as the depth of sectarian conflicts; the corruption in Baghdad; the rash decision to disband the Iraqi army and the faltering attempts to rebuild it; and finally, the dissolution rather than the integration of the Awakening Councils into the state after Abu Musab Zarqawi was killed.

But Hezbollah sources in Beirut also emphasized the responsibility of external forces for recent events. They said Turkey, for example, acted as a safe base and logistical warehouse for ISIS, and that claims to the contrary in the media are for disinformation purposes only, with the sources providing evidence of this claim.

For example, most ISIS camps are near the Turkish border, and ISIS — which systematically destroys all religious shrines and tombs — has preserved Ottoman ruins in the areas it controls, which Ankara has mobilized to protect. Also, the issue of the Turkish citizens and diplomats whom ISIS was said to have kidnapped when it first invaded Mosul and its environs was suddenly withdrawn from the media and wrapped in silence, even in official Turkish positions.

According to the sources close to Hezbollah, Turkey is somehow involved in the ISIS event. They said it seems that Ankara has coordinated the matter with the authorities in Erbil so both sides can reap the gains from the ISIS event: Turkish Prime Minister Recep Tayyip Erdogan gets the votes of the Turkish Kurds in the presidential election and Kurdistan Region President Massoud Barzani gets Kirkuk — and perhaps an independent state. Both sides will have a dismembered Iraq and different roles in managing its reconstitution.

In contrast, the sources close to Hezbollah in Beirut said Saudi Arabia’s calculations and gains were also clear, noting that the Saudis have achieved two main goals in Iraq through the ISIS event:

First, ISIS hit the Iraqi state that was established in 2010, when Nouri al-Maliki rose to the post of prime minister against Riyadh’s will, at the expense of the team Riyadh supported in the 2010 elections. Today, parties seek to shape a new central authority in Baghdad, ranging from formulas that would modify the government yet keep Maliki in power, to another that would completely remove Maliki.

Second — and the most important goal achieved by Saudi Arabia from the ISIS invasion — is to smash the continuous bridge between Iran and the east bank of the Mediterranean Sea, a strategic bridge that Tehran gradually and painstakingly established. The bridge connects Iran to Syria and Lebanon through Iraq, specifically western Iraq, which ISIS dominates today. But, according to the Hezbollah sources, after Riyadh backed down from trying to directly overthrow Tehran’s ally in Damascus, President Bashar al-Assad, Riyadh has outflanked both Assad and Tehran elsewhere, issuing severe blows to the Tehran-Assad alliance by cutting the contiguity between them.

What happened on the ground in Mosul, Salahuddin and Anbar not only broke the logistical umbilical cord between Tehran and Hezbollah, it also changed the military power balance in Iraq, Syria and even Lebanon.

In their military calculations, the sources indicated that Hezbollah has reopened the field maps of the areas stretching from west Iraq, particularly in Anbar, all the way to Beirut — in other words, the areas extending across the province of Homs, all the way to northeast Lebanon. Hezbollah fought tough battles in those areas since May 2013 to keep Sunni fundamentalist gunmen away, and succeeded in closing those areas after controlling Qusair in Homs in June 2013 and then Yabrud in Qalamoun in March 2014. But today, it seems ISIS has revived its hopes and dreams in that crescent. All sleeper cells have awakened and those that were already awake were reactivated.

The sources pointed to various evidence: the return of suicide bombings to Beirut and especially the city’s Shiite areas; the return of unrest to Lebanon’s north, which borders Syria and has a Sunni-majority population; the return of clashes against gunmen pockets in Qalamoun months after the end of battles there; and, more importantly, the faltering of the reconciliation negotiations with hundreds of fundamentalist Syrian opposition gunmen in al-Waar, Homs.

All these indicators have raised Hezbollah's state of alert. Hezbollah is taking precautions in case ISIS seriously attempts to sneak through the corridor desert from Anbar to Lebanon via Syria. Hezbollah is at its highest military and security alert level, said the sources. And the alert will continue in Lebanon till the battle in Iraq ends decisively.