Israel misreads Hamas and Palestinians' will to attack

Despite Israeli assessments to the contrary, Hamas proved quite willing to step up rocket attacks, and the Palestinian street was more than ready for riot and revolt. 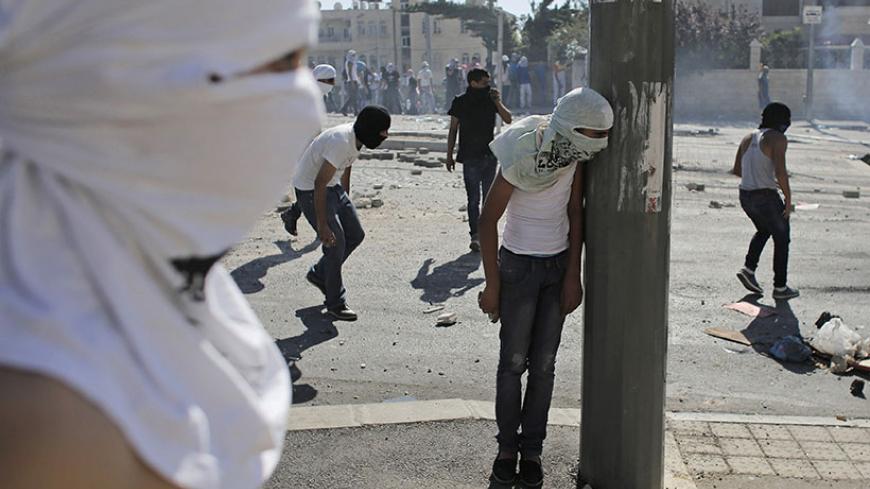 A Palestinian stone-thrower takes cover behind a utility pole during clashes with Israeli police in Shuafat, an Arab suburb of Jerusalem, July 3, 2014. - REUTERS/Ammar Awad

Within a 24-hour span, two of the Israeli defense establishment's long-standing and well-established basic premises were disproved. The first one was that Hamas had been deterred. Seeking to de-escalate the situation, the reasoning went, Hamas was interested in quiet at any cost.

The second premise was that the outbreak of a third intifada in the territories was improbable. There was no negative energy or critical mass or gas fumes that could blow up at any given time. According to that premise, the Palestinian population wanted quiet. Having grown weary of the long years of confrontation, it wanted to improve its standard of living.

Toward the evening of July 2, I had a talk with a high-ranking Israeli security official who said the following: We have clear indications to the effect that Hamas has no intention of ratcheting up the rocket fire; quite the contrary. We're receiving and intercepting indications in that vein from across the front. Given its real strategic distress, the last thing Hamas needs right now is a round of violence. It wants quiet.

The talk with the official took place on the afternoon of July 2, when it seemed that the ground was calming down and the rocket salvos from Gaza on Israel's southern communities were subsiding. Israel's top defense officials assessed that it would become much quieter the following day and that the quiet would last.

But on July 3, some 33 rockets were fired at the town of Sderot and other localities in the south. Hamas spokesmen — all masked — held a news conference in which they loudly spewed, as they invariably do, a new barrage of threats at Israel. One of the rockets fired at Sderot hit a makeshift day care center in a residential building while one woman and three toddlers were inside. Miraculously, they all emerged unscathed. Other rockets damaged other buildings. Some 1 million Israelis went into alert mode, ready to scurry into their safe rooms or shelters. For the first time since Operation Pillar of Defense in November 2012, it was Hamas itself that fired the rockets, claiming responsibility and appearing to be trigger-happy. The Israeli situation assessment was about to collapse.

At the same time, the second assessment — namely, the one that rules out the possibility of a third intifada in the territories — also seemed to be on the verge of collapsing. For the past three days, serious riots have taken place in East Jerusalem between young Palestinians and Israel's security forces. What triggered these riots was the murder of Muhammad Abu Khdeir, a 16-year-old Arab whose body was discovered in the Jerusalem Forest the morning after the bodies were unearthed of three Israeli teenagers who had been kidnapped by Hamas militants three weeks earlier.

The current assessment regarding the circumstances surrounding the murder of the Palestinian youth is that it was a hate crime perpetrated by Jewish nationalists who reacted to the murder of the three Israeli teens. Although not final, this assessment sparked fire on the ground. Having been under a siege staged by Israel's security forces over the last few weeks, the Palestinian public erupted spontaneously. East Jerusalem was inundated with sights that Israelis had not seen for several years, with hundreds of Palestinians hurling stones and firebombs, burning tires and vandalizing vehicles.

An autopsy of Abu Khdeir was performed on July 3 and his funeral was expected to take place on July 4, about an hour after this article was written. The funeral, slated to take place at the peak of this volatile and tense situation, on the first Friday of the Ramadan fast, will prove critical. Unless the events spiral into serious violence, there is a chance that the riots will wane over the next few days. But if the events deteriorate into an all-out confrontation, what we have here is an entirely new ball game.

For the first time in a decade, the idea of a third intifada in the territories will be on people's lips. Such an intifada could be the blast that will rattle the deadlock equation that has dogged Israelis and Palestinians in recent years. Such a blast could be conducive to a major conflagration throughout the entire theater, prompting change in the situation assessments and the paradigms on which they have been predicated for many years. Such an intifada could also herald the end of Prime Minister Benjamin Netanyahu's rule in Israel.

At the moment, it seems that Hamas has agreed to a cease-fire in the Gaza sector. On the morning of July 4, the BBC reported that in the negotiations between the two sides, Israel and Hamas have agreed to end the fire and its subsequent punitive measures in the afternoon.

What drove Hamas leaders to change their mind between Wednesday evening and Thursday morning? "We believe," said a senior Israeli military official, "that Hamas saw the events in Jerusalem, and grasping the rage that washed over the Palestinian public, it decided to ride on this wave to somewhat restore its standing with the Palestinian public."

The official went on to add, "Hamas is at an all-time low. It is totally broke and has also lost all its international backing. The contraband tunnels from Egypt have been sealed off and the already dire situation in Gaza just keeps getting worse. For the past two months, Palestinian President Mahmoud Abbas has refused to transfer the salaries to tens of thousands of Hamas civil servants in Gaza. Almost the entire Arab world is giving Hamas the cold shoulder. Suddenly, by showering rockets on Israel, the Palestinians perceive the organization to be the only body fighting for their honor and fighting back at Israel. Given Hamas' current situation, it doesn't have many other options. This is a desperate move, which is why it's also dangerous."

Another Israeli security official elaborated on Hamas' situation: "The Egyptians barely open the Rafah crossing twice a week, allowing some 300 to 400 people to exit Gaza. Thousands are standing in line, trying to get out of the Gaza hell. According to reports we've received, to move to the front of the line, people are willing to pay thousands of dollars in cash. The distress and pressure Hamas is experiencing in Gaza have turned it into a lame organization. It is now in survival mode, fighting for its life. In such settings, it becomes the most dangerous. Moreover, it doesn't use common sense. The coordination between Hamas leadership abroad, to wit, Khaled Meshaal, the political bureau chief, the local leadership, the military wing and Hamas militants in the West Bank is practically nonexistent. It's every man for himself. That's chaos, and when there's chaos anything is possible."

It is against this backdrop that a fierce political war is raging between the radical right, represented successfully by Minister of Economy and Trade Naftali Bennett, chairman of the HaBayit HaYehudi Party, and Netanyahu's pragmatic right, as well as the centrist political wing represented by Finance Minister Yair Lapid and Justice Minister Tzipi Livni. This war was evident in the deliberations of the security cabinet, which this week were strained and trying. Everyone cast aspersions at each other.

The one to take the most flak was Bennett, who demanded during those discussions to mount broad punitive operations in both Judea and Samaria and also Gaza, and to deal serious and painful blows to Hamas and the Palestinians to restore Israel's deterrence and to take the wind out of the sails of Palestinian terror and kidnapping attempts. Dismissive of the proposals made by the military and chief of staff Lt. Gen. Benny Gantz, Bennett also lashed out at his co-ministers, posting fuming statuses on his Facebook page.

Later in the week, other Cabinet members accused him of "fanning the fire." Senior Cabinet members with whom I spoke said that Bennett was behaving like "a big irresponsible child, an irresponsible man who recklessly incites the public against the military and government." One of them went a step further, arguing that if the murder of the Arab youth was indeed perpetrated due to nationalistic motives, it was people like Bennett who facilitated the climate that prompted it.

For his part, Bennett is fighting back. Unperturbed by this criticism, he does not waver. What we have here is an ideological debate, but also a political battle. Having served as Netanyahu's bureau chief and leaving the job angrily, Bennett aims high. He is trying to rob Netanyahu of his right-wing electorate to become the leader of the right and then the prime minister. Bennett doesn't look like your typical right-winger. Sporting a smiley disposition and appearing to be "one of the guys," this high-tech man speaks fluent "Tel Avivian" and managed to garner 12 (out of 120) seats in the last general elections.

At this time, while seeking another term as premier, Netanyahu regards him to be a threat of the first order. But before tackling Bennett, Netanyahu has a couple more pressing issues to deal with: the danger of an outbreak of a third intifada in the territories and the rapid escalation in Gaza. Netanyahu's relatively quiet eight years (during his three nonconsecutive terms) are in danger.