Western analysts misjudged the actions of a desperate Hamas, which considers honor and face-saving above all, launching an attack against Israel when it has nothing to lose. 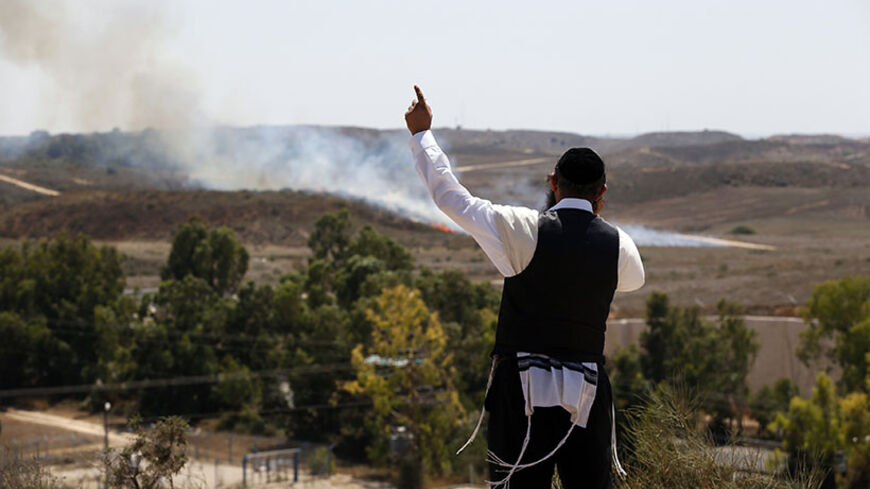 An Israeli man speaking on a mobile phone gestures in front of a fire that broke out after a rocket landed near the southern town of Sderot, July 9, 2014. - REUTERS/Ronen Zvulun

Before the Israel Defense Forces (IDF) launched Operation Protective Edge in the Gaza Strip, former Hamas Prime Minister Ismail Haniyeh, Hamas senior official Mahmoud al-Zahar and the spokesman for the movement’s military wing Abu Obeida all promised that if Israel attacks Gaza, it could expect all sorts of surprises. And, indeed, we must admit that Hamas has managed to surprise.

But the surprise isn’t the firing of long-range rockets (ever since Operation Pillar of Defense, it has been established that Hamas has rockets that can reach Tel Aviv). It is the fact that despite its miserable situation, after so many people wrote the movement off and predicted its demise, Hamas still dares to fire dozens of rockets at Israel in what is commonly seen as a suicidal move.

On July 4, my colleague Ben Caspit published an article in Al-Monitor titled, “Hamas is fighting for its life.” He wrote how two basic assumptions of the Israeli security system were disproved in a single day. “[T]he last thing Hamas needs right now is a round of violence,” he was told by a senior security official, who assumed that Hamas had been deterred and wanted silence at all costs. The second assumption was that a third intifada would not break out. The Palestinians were too tired, drained and beaten down after many long years of conflict.

The research units of Military Intelligence and the Shin Bet, as well as academic researchers and other authorities on the movement, are constantly analyzing Hamas in an attempt to foresee what it will do next. The problem is that the tools most of them apply in this analysis are based on more familiar Western patterns of logic and therefore irrelevant to the Islamic movements in the Middle East. Logic would dictate — which is also the source of the flawed assumption — that if Hamas is in a state of crisis and its leaders are concerned for the future and fate of their movement, they would keep a low profile. They would not dare getting into another clash with Israel, especially one where the outcome is known in advance.

When the subject is a radical Islamic movement, even a fanatic one, if you will, the modes of thought, the logic and the cost-benefit analyses of its leaders and activists alike are different from what would be expected. Their rationale is different.

I’ve been following the Hamas movement for 20 years. Throughout the whole period of the bloody armed conflict with Israel, I have found, each time anew, that Hamas' guiding principle is to never appear before the Palestinian public as defeated; never to be seen as a beat-up movement. This principle is a common thread running through the movement’s political and military leadership alike.

The number of Palestinian casualties in Gaza during Operation Cast Lead from 2008 to 2009 reached 1,300. The destruction of infrastructure and buildings was devastating. Hamas suffered a terrible blow. Nevertheless, immediately after a cease-fire was reached, the movement’s activists poured into the refugee camps to hand out candy in honor of their “great victory” over the “Zionist enemy.”

It was all a sham. The movement’s propaganda wing told imaginary stories about victories that never happened. The main thing was not to seem defeated. That’s the way it was then, and that’s the way it is now in the current conflict. It is a cruel, cynical game being played at the expense of the lives and well-being of the one and a half million Palestinians suffering under their rule in the Gaza Strip.

Ever since it was founded, Hamas seemed to suffer from an inferiority complex vis-a-vis the PLO. That is why the movement’s leaders and activists constantly try to prove they are no less legitimate representatives of the Palestinian people and, most of all, that they are defending it from the Israeli occupation, even when they are at a disadvantage.

What's motivating Hamas to commit suicide now, at least in operational terms, when all the conditions are to its detriment? Over the last few months it has become quite clear that the economic crisis in the Gaza Strip is dictating the fate of the movement and its leaders. The Rafah crossing is closed; there aren’t enough tunnels to bring in ammunition because the Egyptian army sealed most of them; it is not receiving the much needed diplomatic backing from Egypt and other Arab states; and, most of all, it lacks money to pay salaries to its bureaucrats and fighters.

Despite all that, Hamas had the temerity to reject the policy of restraint shown by Israel and turned down an Israeli proposal to “meet quiet with quiet.” Instead, it launched a bold rocket war against Israel and issued illogical demands (the opening of the border crossings, the re-release of prisoners released during the Gilad Shalit deal, who were arrested again following the abduction and murder of the three teens, and the demand that Israel stop imposing obstacles on the Palestinian unity government). Hamas insists that it will only accept a cease-fire if these demands are met.

By issuing these demands, Hamas actually revealed where it is hurting most. These are the very same weak points, which forced it up against the wall, and which threatened to put an end to its control of the Gaza Strip.

Without opening the border crossings or any relief along the borders whatsoever, it's obvious that Hamas cannot hold on and that its fate is sealed. It will not be able to survive. The Rafah crossing is Gaza’s oxygen tube. Without a steady, sure supply of food, raw materials and energy, there is no way that it can hold on for even another month.

Apparently, the unity government with Fatah won’t survive either. In other words, what looked like a rescue line as little as a month ago is about to get torn apart. Head of the Palestinian Authority Mahmoud Abbas is refusing to transfer salaries to Hamas employees in Gaza. This means that it is only a matter of time before the unity government collapses, and with it, Hamas control of Gaza.

The issue of prisoners is no less important to Hamas. Following the abduction and murder of the three teens, Israel re-arrested prisoners who were released during the Shalit deal. This effectively erased the one achievement that Hamas touted as its greatest accomplishment since it took power.

Without the border crossings, without the prisoners and without the unity government, Hamas is left without any basis for its existence. It has no more hope of surviving. Having no other choice, Hamas decided to play a zero-sum game with Israel, in which it had nothing to lose. Even if only some of its demands are met, Hamas will be granted more time to breathe. If it fails and Israel launches a comprehensive operation in Gaza, it would be better off showing that its government was overthrown by the “Zionist enemy,” with its tanks and jets, while its own fighters fought to their last drop of blood on behalf of the Palestinian people.

That leaves us with the big question: What should Israel do when dealing with a fanatical group of radical Islamists who believe they have nothing to lose? Should it leave Hamas with the illusion that it defeated the “Zionist enemy” and start the countdown to the next clash? Or should it use "protective edge" to topple the Hamas grip on Gaza? After all, following the heavy rocket assault on its cities, Israel probably has nothing to lose.