Hamas has made a desperate bid for Qatar's support, but even Qatar's money won't save it if Egypt doesn't open the crossings into Gaza. 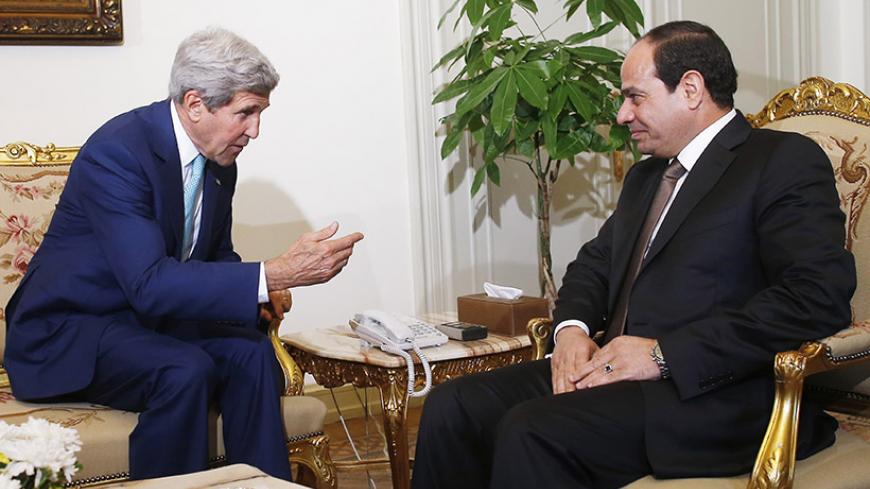 US Secretary of State John Kerry, who is in Egypt this week to advance a cease-fire between Israel and Hamas, received his fair share of criticism from Israelis during the failed negotiations with the Palestinian Authority for believing that a quick agreement could be reached between the two warring parties. Now, he's about to discover that arranging an acceptable cease-fire is no easy feat, either.

Hamas and Israel are caught in the grip of a bitter strategic struggle, intended to rewrite the rules of the game, rules that were shaped in the wake of the Hamas coup in Gaza and honed during the Israel Defense Forces’ (IDF) two previous operations in Gaza, Cast Lead and Pillar of Defense. Many, including the US administration, are having a hard time understanding the suicidal motives and moves of Hamas at this stage, as revealed during Operation Protective Edge. Not only did it enter into a military adventure fully aware that it was taking on an Israeli force that is many orders of magnitude larger, more sophisticated and better equipped. Its conduct vis-a-vis Egypt is also difficult to understand, as it is the one country that could possibly save Hamas from complete collapse.

Hamas rejected the Egyptian outline for a cease-fire bluntly and decisively, in all channels at its disposal. By doing so, it signaled to Israel — practically forced it — to enter Gaza in a far-reaching ground operation. The results of this ground incursion, involving tens of thousands of reservists as well as tank and infantry forces, with the Israeli air force in absolute control above, will be devastating to Gaza and to Hamas. And yet, there can be no doubt that the regime in Gaza took that into consideration. Although the military wing, Izz ad-Din al-Qassam Brigades, hopes to harm Israeli soldiers in the densely populated Gaza territory and even anticipates abducting soldiers, those are not the main reasons that Hamas coerced Israel into sending a massive force into Gaza.

From the moment that Operation Protective Edge began, Hamas made an important strategic decision that changed the rules of the game by leaving itself with just two options. It would either ensure that the border crossings would be reopened, thereby allowing Hamas to continue controlling the Gaza Strip, or it would willingly give up the burden of government but go down in a blaze of glory, leaving a lasting impression of sacrifice and heroism. More precisely, Hamas decided to fight its last battle, a battle of life or death.

When Hamas was offered a cease-fire that did not ensure that the movement would survive and maintain full control over the Gaza Strip, its military wing intensified its barrage of rocket fire against Israel. It began operating the “death tunnels” that had awaited this fateful day, and forced Israel to order the launch of a ground incursion into the Gaza Strip territory.

But the suicidal behavior exhibited by Hamas was hardly limited to an intense desire for a full frontal clash with Israel on the battlefield. It could also be seen in the movement’s arrogant diplomatic attitude toward Egypt. Hamas’ spokesmen claim that they regard Egypt as an unacceptable mediator. That was why they contemptuously rejected the Egyptian outline for a cease-fire. Yes, the outline ensured a cease-fire, but it ignored every single one of the conditions set forth by Hamas to ensure its survival.

It is worth noting the fact that Egyptian President Abdel Fattah al-Sisi was willing to have his country take on the role of mediator with the group, even though Hamas has been outlawed in Egypt as a terrorist organization, is surprising in itself. But instead of taking advantage of this opportunity, hoping that this was just the start — a signal to Hamas that it could possibly improve its relationship with the Sisi regime, Hamas preferred to close the window cracked open by the Egyptians. It went so far as to spit in Egypt’s face by turning instead to Turkey and Qatar, two nations that Israel views negatively in this role, and whom it would never be prepared to accept as mediators.

The desire expressed by Hamas that Qatar serve as mediator in the negotiations is based on the assumption that the Gulf state would feel a sense of responsibility for the outcome of the agreement, thus taking the fate of Gaza on its shoulders. The rich emirate would pour money into Gaza, saving Hamas.

Here, too, however, Hamas got caught up in the illusion and made a big mistake. The Egyptian government regards Qatar as the fount of all evil because of its sympathetic attitude toward the Muslim Brotherhood. Furthermore, the anti-Egypt line, which is now a clear agenda item for the Al Jazeera network, makes it all the more unlikely that Egypt would open its door to Hamas, in this case by opening the Rafah border crossing.

Any cease-fire agreement, no matter who advances it, cannot be implemented without Egypt’s approval. Sisi is the only person who can order the opening of the Rafah border crossing to allow food, raw materials and energy — items that would save Hamas from total collapse — to enter the Gaza Strip. If Sisi persists in being stubborn by not opening the crossing, there is no way Hamas can survive as a movement. Even money from Qatar won’t help. Hamas undoubtedly recognizes that without the opening of its border crossings it has no chance of surviving, even if an immediate cease-fire is declared, all the fighting stops and the movement’s leaders somehow manage to survive the campaign.

An analysis of Hamas’ behavior during the military operation, its preparation for the "mother of all operations" and its rejection of all the options with Egypt indicates that Hamas has actually adopted a suicidal approach intended to release it from all the obligations of government that it failed to meet. If it is defeated, even if it can claim a handful of point-specific victories, Hamas will live on in Palestinian history as a symbol of heroism.

This and only this will ensure the movement’s survival into the future. The survival of Hamas is now dependent on refashioning the ideology that suffered during its years in power. Opponents of Hamas in the Gaza Strip accused it on numerous occasions of obfuscating its symbol and its banner — jihad against Israel — because it preferred the sweet benefits of power. Releasing itself from the constraints of government through jihad will restore not only its lost honor, but also the main reason for its existence. Jihad was and remains a way of life in Hamas, but apparently, it has also become the one drug that can keep it alive. Hamas failed miserably as a political movement because it failed to find the middle road between jihad and national responsibility.

As a movement it was forced to succumb, to declare cease-fires with Israel, and in so doing, to lose the very reason for its existence, at least according to its electorate. Then it ran out of options. The moment of truth has arrived. It is time to decide. Hamas has made the cold, calculated decision that even if its Izz ad-Din al-Qassam militants succeed in harming Israelis and launching painful strikes against Israel on the battlefield, there is still no assurance that it could assure the continuation of its government. Its future as a movement in power is uncertain. On the day that a cease-fire is declared, regardless of whether Israel can claim total or partial victory, it will be clear to all that the death and destruction that descended upon Gaza could not provide it with what is most important of all: money to pay salaries.

Furthermore, even if Qatar does pour hundreds of millions of dollars into the “rehabilitation of Gaza” once the campaign is over, the money will be of little value if the border crossings remained sealed.

As such, with Hamas approaching the moment of truth, the question its members must ask themselves is: What do we give up? Should they abandon jihad, a concept that flows through Hamas’ very veins and ensures its future as a movement? Or should they abandon their role as a political movement in power, realizing that it cannot possibly meet its obligations in this capacity, and that power has turned out to be the one thing that will ultimately bring about its demise? Without giving up one or the other, there is no way that Hamas can survive.

Hamas made a very calculated decision when it chose to use all means at its disposal to force Israel to enter the Gaza Strip. It can now sing its swan song to the sounds of war.

There is now just one leader who can save Hamas from total collapse. This person is Sisi, and he's watching everything unfold from a safe distance, as if it were a summer blockbuster. If Kerry makes him an “offer he can’t refuse,” maybe he will be good enough to toss Hamas a lifeline.