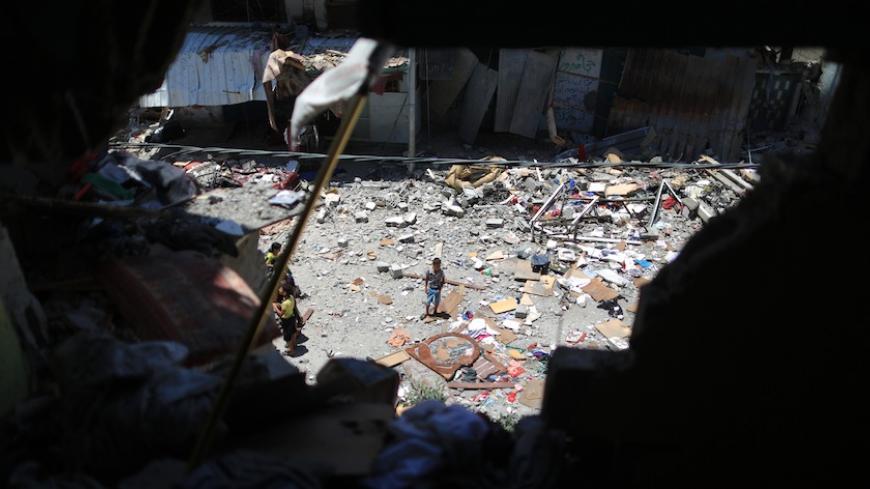 Palestinians walk in the aftermath of an Israeli missile strike in Gaza City, July 10, 2014. - Wissam Nassar

Asmaa al-Ghoul described an Israeli airstrike that hit a clearly marked media vehicle, killing the driver who had driven Ghoul and other reporters just hours earlier:

Ghoul noted that women and children of Gaza have paid a heavy price in the conflict so far. At least 19 women and 15 children are counted in the current toll of more than 160 dead and over a thousand wounded. No Israelis have been killed so far in the fighting.

Gaza’s hospitals find themselves unprepared for the increase in casualties due to a shortage of supplies.

Rasha Abou Jalal spoke to the director of nursing at al-Shifaa hospital, who worried about the prospect of a protracted conflict: "The occurrence of such a war, in light of the current crisis, would cause a real disaster and lead to a multifold increase in the number of victims and dead."

Daoud Kuttab suggests that the true target, and a likely casualty, of the conflict is the unity agreement between Fatah and Hamas.

“The Israeli military establishment and to a lesser degree the Hamas military wing have their own reasons to ramp up the conflict and test their latest military equipment. The war on Gaza is an unnecessary war. The calm from the previous cease-fire was holding until Netanyahu and company decided to piggyback on a heinous crime against three Israeli settlers. Their aim is to accomplish far-reaching political goals that include crushing a legitimate political movement.”

Abu Amer suggests that such a possible Israeli ground operation in Gaza could prove difficult for Israeli forces due to Hamas’ extensive tunnel network.

“The dozens of tunnels in Gaza are among the challenges the Israeli army might face should it invade. According to the Hamas field commander, 'These tunnels, dug under every street and alley in Gaza, constitute a strength to be exploited by the brigades to exacerbate the Israeli military’s confusion and create security concerns that the army will be unable to deal with.'"

Israel Pulse’s Mazal Mualem reports that Israeli public opinion is divided on the merits of sending troops into Gaza, and that Prime Minister Benjamin Netanyahu himself may be inclined to resist further military escalation:

“Netanyahu is operating within a set of military, political and diplomatic considerations that are making him postpone as long as possible the order to enter Gaza. … Netanyahu does not want to have to defend himself in front of an inquiry commission of the type convened after the Second Lebanon War, to be accused of responsibility for the deaths of soldiers as Ehud Olmert was at the time and to pay with his office. On the other hand, Netanyahu also fears a second Goldstone report, which would inflict a diplomatic catastrophe on Israel such as the one that followed Operation Cast Lead in 2008. That is why Netanyahu is not only holding military consultations, but in recent days has also sought the advice of experts on international law.”

Ben Caspit writes that Israeli decision-makers worry that a ground assault to depose Hamas could lead to an even more radicalized and dangerous alternative:

“Paradoxically enough, Israel has no interest today in toppling Hamas. It knows that the vacuum that will be created will turn into a magnet for a more radical organization. And that's why, as a high-ranking Israeli diplomatic official told me this week, Israel pounds Hamas with one hand while helping it with the other. It continues to supply electricity, water, vital products, food, cash and medicine to Gaza.”

Shlomi Eldar writes that Hamas’ apparent "suicide" actions against Israel should be understood in the context of its its “guiding principle … to never appear before the Palestinian public as defeated; never to be seen as a beat-up movement.”

Eldar adds: "The economic crisis in the Gaza Strip is dictating the fate of the movement and its leaders. The Rafah crossing is closed; there aren’t enough tunnels to bring in ammunition because the Egyptian army sealed most of them; it is not receiving the much needed diplomatic backing from Egypt and other Arab states; and, most of all, it lacks money to pay salaries to its bureaucrats and fighters …

"Having no other choice, Hamas decided to play a zero-sum game with Israel, in which it had nothing to lose. Even if only some of its demands are met, Hamas will be granted more time to breathe. If it fails and Israel launches a comprehensive operation in Gaza, it would be better off showing that its government was overthrown by the 'Zionist enemy,' with its tanks and jets, while its own fighters fought to their last drop of blood on behalf of the Palestinian people."

The Hamas rockets fired into Israel have touched off a media frenzy in Israel with countless hours of live television spent on a “disaster marathon” that Mualem writes has played into the hands of Hamas.

"'The hysteria being created here serves the interests of Hamas first and foremost,' claimed a politician from the right, who asked to remain anonymous for the time being. 'It looks like all the citizens of Israel are working for Hamas. A few missiles fired at Gush Dan (metropolitan Tel Aviv) determined the day’s agenda, as if we didn’t have the best army in the world.'"

Familiar routines have been disrupted for Israelis as bomb shelters replaced summer camps for many Israeli children. In the south of the country, fear is now ingrained, as Daniel Ben Simon found after speaking to the former mayor of Sderot, Eli Moyal:

In an exclusive interview with Iraq Pulse’s Mustafa al-Kadhimi, Massoud Barzani, president of the Kurdistan Region of Iraq, stated that Kurds were keeping all options on the table:

“We act based on two interrelated courses of action: full cooperation with other Iraqi forces to save Iraq from its ordeal, and considering our choice of self-determination if we failed again in our attempts to rebuild a democratic federal Iraq that achieves partnership,” Barzani said.

Iraqi Deputy Prime Minister for Energy Affairs Hussein Shahrestani, in an interview with Al-Monitor’s Ali Hashem, warned that the Iraqi federal government considers the export of oil from the Kurdistan Region through Turkey illegal:

“Nobody wants to buy stolen oil, no country wants to get into legal problems with Iraq,” Shahrestani told Al-Monitor.

Iraq Deputy Prime Minister Saleh al-Mutlaq, head of the Al-Arabiya coalition, in an interview with Al-Monitor’s Mustafa al-Kadhimi, said that he "was mistaken" to join the Iraqi government, and said, “What is happening today in Iraq is all due to the United States. The latter is the one that ousted a dictatorship full of flaws yet with state institutions, and brought about a new regime that is akin to flaws without a state."

“The Islamic State, after moving heavy weapons it took from the Iraqi army to Syria’s Deir ez-Zor and Raqqa towns, has been mounting three-pronged attacks since July 2 against Kobani, one of the three cantons of Rojava. IS had been expected to move toward Baghdad, backed by Sunni tribes, Baathists and Salafist Islamic factions, but diverted its operations to Syria.”

Syria Pulse’s Edward Dark wrote of the fear among Syria rebel forces that they — caught between the Islamic State and the forces of the Syrian government — would not be able to hold Aleppo. Liwa al-Tawhid commander Abu Hammoud told Dark, “Our fear now is without reinforcements and more weapons we will lose [the city of] Aleppo to the regime, and the [countryside] to the Islamic State.”