Nasrallah promises 'all means of support' for Gaza 'resistance'

Iran and Hezbollah may see opportunity in the Gaza crisis; tunnels represent a "second Gaza" for Israel Defense Forces; Al-Monitor reports from Gaza on the civilian costs of the war; Saudi Arabia’s Turki Al Faisal calls Israel’s attack on Gaza a "barbaric assault"; the battle for Aleppo begins soon. 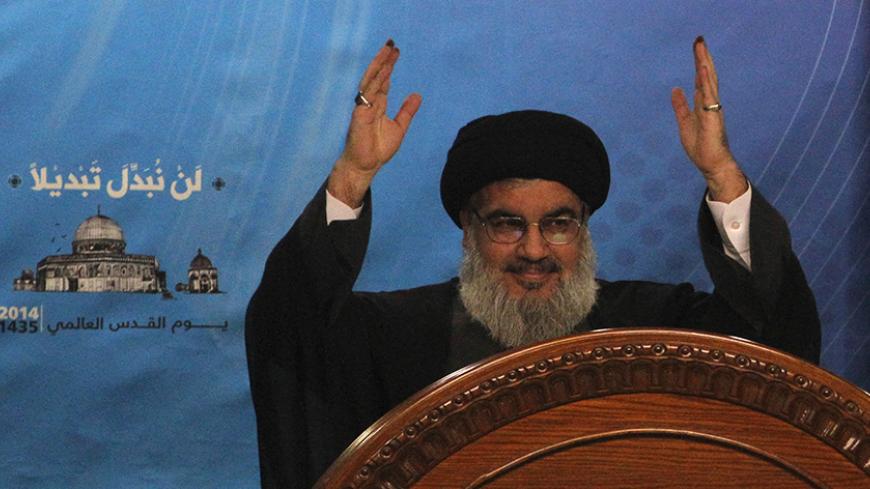 Hezbollah Secretary-General Hassan Nasrallah pledged "all means of support" for the "Palestinian resistance" in a July 25 speech in Beirut.

Nasrallah’s message may be part of a reset in Hezbollah-Hamas ties after a fallout over differences on Syria in 2012.

"According to the same sources, within Hezbollah, the expressions 'betrayal' and 'lack of loyalty' are commonly used to describe Hamas’ position on the Syrian conflict. Nonetheless, the group has been careful not to let its poor relationship with Hamas damage its relations with the al-Qassam Brigades."

Chararah notes that Israel and Hamas are connected to Iran’s opportunism along the Israeli-Palestinian fault line:

A former member of Iran’s Shura Council told Adnan Abu Amer, “’The Gaza war was a suitable opportunity for Iran and Hamas to pump more blood into their chilled relationship. Meanwhile, Tehran wants to regain its alliance with any regional power in the region, and Hamas has proven to be a party that should not be underestimated, regardless of our differences over other issues. The movement has actually showed steadfastness that lasted more than two weeks in front of the Israeli war machine.”

Abu Amer broke the story this week of a Hamas training manual that describes tactics the al-Qassam Brigades have employed in confronting the Israel Defense Forces (IDF).

The manual reads, "Amid the military power imbalance favoring Israel, the resistance will heavily use anti-tank guided missiles while relying on qualitative capabilities to respond to the ground operation."

It continues, "The Israeli soldiers will primarily target tunnels, as these give fighters easy mobility and allow them to set up ambushes. The most heard phrase among the invading soldiers is 'Careful! There is a hole under your foot!' As they approach residential areas, al-Qassam sniper units will emerge and the army will face hundreds of improvised and camouflaged bombs in each lane and road.

"The more it advances into the residential areas of Gaza, the more Hamas fighters will be favored; it is on their land that the clashes are taking place, which allows them to easily monitor the vehicles of the Israeli army."

The network of Hamas tunnels provides a “second Gaza” that has complicated IDF military operations, according to Israel Pulse’s Shlomi Eldar:

“No Iron Dome air defense system has been found as of yet to counter these terrorist tunnels. … This only testifies to the degree that the IDF was surprised by the scope and size of the assault tunnels that Hamas created along the border with Israel. … It was suddenly revealed that there are two Gazas: One is the crowded, impoverished and faltering Gaza, but there is also an 'underground Gaza,' buried deep below the surface. As of now, the IDF has located 36 tunnels, but even during the current fighting, with the IDF still searching the area, terrorists have been sent to launch attacks deep in Israeli territory through tunnels that have yet to be discovered.

"According to the security source’s assessment, these are enormous tunnels, the planning and preparation of which probably lasted approximately three years. The cost of excavating, reinforcing and maintaining each tunnel is approximately $1 million, and as far as is now known, dozens of such quality tunnels were dug along the border between Israel and the Gaza Strip, from the northernmost part of the territory all the way to the south."

'My mother and brothers died!'

While Israeli forces and Hamas battle street by street, civilians have been left with nowhere to run, often fleeing from one location only to evacuate again a short time later.

Asmaa al-Ghoul captures the aftermath of a shelling at an UNRWA shelter that caught hundreds of civilians as they waited to evacuate the area:

"Shinbari told Al-Monitor that they were in the process of evacuating when the Israeli shells struck. 'We were sitting in the school when the Red Cross came and warned us to vacate the place. Minutes later, shells started falling on us from everywhere. I saw my mother Fatima al-Shinbari die in front of me, as well as my father’s wife Falasteen, and my brother Ali, who is less than 10 years old, Mariam, 12, and my brother Abed Rabbo, 16. They all died.' Hussein broke down crying again, his relatives trying to calm him down."

Many civilians have come to makeshift shelters set up by UNRWA in schools and other buildings, with over 118,000 Gazans now crowding into these structures.

Rasha Abou Jalal speaks to one mother who brought her children to the shelter:

"Umm Rami al-Shaiwa keeps trying to calm her four children, who scream and cry whenever they hear the sound of Israeli aircraft bombing the houses around them. She takes simple safety measures, hoping to protect her children from Israeli bombs.

"Shaiwa, who lives in al-Daraj neighborhood in central Gaza City, said, 'Whenever I hear the sound of an Israeli plane, I think that it will drop its bombs over our heads and turn us into charred bodies at any moment.'"

Hospitals have also been pushed to the brink, relying on generators as Gaza’s electrical outages stretch to 21 hours a day.

Prince Turki Al Faisal, Saudi Arabia’s former general intelligence chief and chairman of the King Faisal Center for Research and Islamic Studies in Riyadh, this week referred to Israel’s attack on Gaza as a “barbaric assault on innocent civilians,” and a setback for the Arab Peace Initiative.

Faisal, who had written an article for Haaretz in July, which read that peace “would be possible with the API as the key foundation stone,” now says that “the present conflict and tragedy has dampened that hope.”

Orwoa Kanawati writes from Aleppo that the residents of the eastern part of the city are abandoning the area as Syrian government forces prepare for an expected offensive:

"The neighborhoods of rebel-held east Aleppo have suffered such massive destruction and exodus that when walking the streets at night, it feels a place struck by a deadly plague. The next second, one hears a sound in the sky getting closer at frightening speed. It's a regime helicopter, and it will certainly find a target. People begin to flee left and right toward the entrances of buildings and shops. A man screams, ‘Don’t group together! Scatter, scatter!’ Another voice yells, ‘Oh, God. Oh, God.’

"The aircraft drops its deadly payload, which explodes in the distance. People ask questions, including one woman who wonders, ‘Where did it drop? Who’s there? Don’t let them die. Oh, my Lord.’ They quickly return to the food line to get their rations and disappear before the evening call to prayer."

Edward Dark, also based in Aleppo, writes of a coming sustained confrontation between Syrian forces and the Islamic State (IS).

“IS has not yet attacked regime positions in Aleppo. It is likely waiting for an opportune moment — either after the regime roots out rebels or when it has other fronts under control and can send substantial reinforcements. It is guaranteed, however, that a confrontation is coming soon,” writes Dark.

Dark reports that the outcome is not certain. “The Syrian regime will find in IS a much tougher opponent than the rebel factions it has been fighting. IS fighters are well trained, well-armed, ideologically motivated and disciplined — a far cry from some of the ragtag, corrupt and chronically undersupplied militias the Syrian army had previously faced. That IS could make short work of some of the toughest rebel groups on the ground, including Jabhat al-Nusra and the Islamic Front, must have the regime worried, at least insofar as it would mean even heavier reliance on already overstretched elite foreign troops and militias.”