During the Knesset debate marking the ninth anniversary of Israel's disengagement from Gaza, conservative politicians claimed that the current Hamas attacks would not have taken place had Ariel Sharon not pulled out of the Gaza Strip. 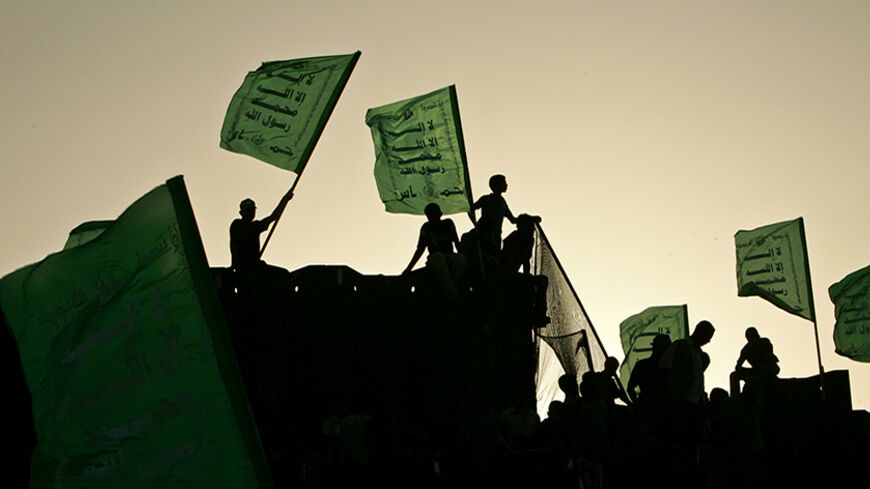 Hamas supporters wave Hamas flags during an Israeli pullout celebration ceremony in Rafah in the south of the Gaza Strip, Sept. 22, 2005. - REUTERS/Ahmed Jadallah

On July 15, as the Gaza cease-fire collapsed, the Knesset’s Foreign Affairs and Defense Committee convened for a hearing marking the ninth anniversary of Israel’s disengagement from Gaza.

Deputy Foreign Minister Zeev Elkin, the committee chairman and one of the Likud Party’s hawks and most prominent critics of the disengagement, chose to focus the hearing on the diplomatic, operational and legal aspects of the plan. But the debate, which, at least according to the news release, was supposed to include “experts of different hues and views on the issue,” set out right from the start to formulate the following equation: The terrorism emanating from Gaza and the rockets hitting Tel Aviv are the direct result of the disengagement and the decision by then-Prime Minister Ariel Sharon.

And if anyone had any doubts about the matter, in his opening remarks Elkin quoted from the Cabinet decision adopted before the plan was implemented, which today appears so divorced from reality. “The State of Israel will insist that the Gaza Strip be demilitarized of weapons and the IDF [Israel Defense Forces] will react to any violation,” he said.

The headline that emerged from the debate, attributed to former deputy Shin Bet chief Yitzhak Ilan, one of the experts who spoke, also fits the narrative the right wishes to imprint on the collective Israeli consciousness. Among other things, Ilan was quoted as saying, “The decision to pull out of Gaza created certain limitations on the activity of the Shin Bet in various areas such as carrying out arrests and interrogations and, no less importantly, loss of critical control over the border crossings, especially as far as the Philadelphi Route goes, which is the main source of the smuggling of weaponry and people. … We warned the political echelons about the intelligence difficulties that the disengagement would cause, but it did not accept our recommendations.”

This narrative, which regards the disengagement as the mother of all sins, was backed up by lawyer Alan Baker, the former Foreign Ministry legal adviser, who said, “In legal terms, even after we withdrew from Gaza, the United Nations and the Red Cross consider Israel responsible for the Strip.” Another speaker was economist and defense expert Shmuel Even, who explained, “The disengagement was a series of strategic mistakes, and this was actually the first time that Israel vacated inhabited sovereign territory due to the pressure of terrorist elements.”

Reinforcement was provided by Knesset member Yariv Levin, Elkin’s ideological ally, whose words were perhaps the most resolute and scathing of all. “Ultimately, the facts are simple: The disengagement is a blight on the history of the state, which evacuated the citizens it sent to settle there. The disengagement is also an embarrassment to democracy, given the way decisions were made.”

The quotes cited here are taken from the news release issued by the committee and can be assumed to have been carefully chosen to reflect the spirit of the chairman’s views. The comments made by Knesset member Nitzan Horowitz of the Meretz Party, who said the mistake of the disengagement was the fact that it was not carried out within the framework of an agreement with the Palestinians, only showed up briefly at the very end. He said, “There is no solution for Gaza absent a comprehensive peace agreement, and there’s no military solution, either.” But his words appear to have been subsumed by the aura of a voodoo ceremony conducted for the disengagement, led by Elkin to the sounds of war from Gaza, a perfect backdrop.

Elkin is a sophisticated politician, smart and articulate, who, despite his past as a member of Sharon’s Kadima Party has managed in recent years to make his way to the leadership of the ideological right to such an extent that he has discarded his past image.

When he explained in a conversation with Al-Monitor that he had invited experts with diverse views to the hearing, he did so to make clear that the debate was not skewed in advance, but he tried too hard to prove that he went out of his way to ensure a debate with diverse views. He said, “There were some who were invited but couldn’t make it. We invited Reserve Gen. Amos Yadlin, and he simply didn’t show up. We very much wanted him to come — after all, he is a staunch supporter of the disengagement. We also invited professor Shlomo Avineri, who really wanted to come. As for Yitzhak Ilan of the Shin Bet, I don’t even know who he votes for, but he said important new things. He said that the Shin Bet explained to the political echelons what would happen if the Philadelphi Route were to be opened, and after all, that’s what is happening right now.”

“It was a show put on by Elkin and the radical right,” Knesset member Horowitz scoffed upon hearing Elkin’s explanation. “What happened was that [Knesset member] Orit Strock of Habayit HaYehudi asked to hold the hearing, and Elkin and Yariv Levin announced that the subject would be a hearing on the influence of the disengagement over Israel’s power of deterrence. They did it against the backdrop of events in Gaza, which appeared to strengthen their claim. It was clear to everyone present that they wanted to show that the disengagement was a mistake and that it must not be repeated. After all, that is their mission.”

In response to my saying, "but there were experts there from all sorts of disciplines," Horowitz replied: "Oh, come on. I can get the Meretz leadership together and invite Elkin and he will be in a minority. A discussion of the disengagement is fitting, but only if a variety of opinions are heard. Unfortunately, today the main ally of Hamas is the radical Israeli right, because they are interested in Gaza remaining a separate entity. After all, what they’re saying is that there’s no demographic problem now because Gaza is out of the game. This is severe disinformation because Gaza is not out of the game, and the way to go is not by running away but by forging an agreement in which Gaza is part of a Palestinian state. That’s what I tried to say at the hearing, but, as I mentioned, mine was a minority view.”

When asked, "What do you feel was the spirit of things?" Horowitz said, "That someone wanted to paint a picture showing that we made concessions to the Arabs — we gave them territories and in return we got rockets on Tel Aviv. But that’s simplistic, because we gave up Gaza so we could hold on to territories [in the West Bank]. Why is no one talking about the fact that since the disengagement more than 4,000 Palestinians have been killed in Gaza? It’s not like Gaza left us after the disengagement. Life in Gaza did not improve; things just kept deteriorating and the authorities there became more radicalized. This cannot be solved by bombardments and conquest.

"The problem was that I was the only leftist who spoke there. The Labor Party Knesset members sat and didn’t react, and I was that delusional leftist. They’re probably afraid of losing voters from the political center."

“Nonsense,” Elkin responded to the claims by Horowitz that the hearing was timed and orchestrated so as to favor the right. “There’s a Knesset tradition of commemorating the disengagement annually, and all the committees do so. We in the Foreign Affairs and Defense Committee held a debate according to a very simple formula: I took the Cabinet decision adopted before the disengagement and read it out loud. It was clear that Nitzan Horowitz didn’t like hearing it. After all, the goal of the disengagement, according to this resolution, was to improve our international standing and strengthen our defense. But after knowing all that we know now, and after the Goldstone Report, it seems surreal.”

Later in the conversation with Al-Monitor, Elkin also sent some barbs Horowitz’s way: “It seems to me that what ticked off Nitzan [Horowitz] was the fact that he had to sit and listen to experts, when all he wanted was to make himself heard. I told him: 'We invited experts, let’s listen to them. Afterward we’ll talk.' I came into politics from academia, and I am used to a framework where it is allowed to sit and listen to the views of the experts first, because Knesset members don’t have a monopoly on wisdom. But Nitzan came into politics from television, where no one listens for more than three minutes.”