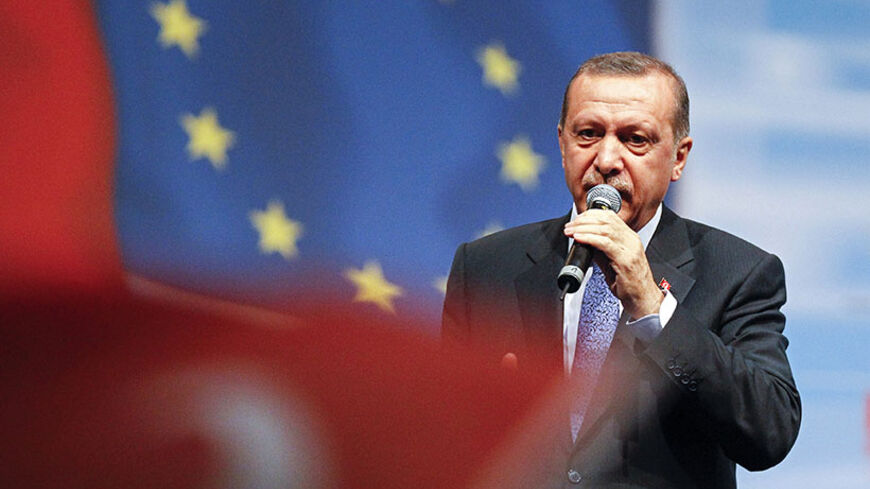 Turkish Prime Minister Recep Tayyip Erdogan has left nothing more to be said against Israel: “[Israelis] have no conscience, no honor, no pride,” he said July 19 during a rally in the Black Sea city of Ordu. “Those who condemn Hitler — day and night — have surpassed Hitler in barbarism.” The day before in Bursa, a city on the coastline of the Marmara Sea, he also had this to say: “World leaders are making weird statements. They say Israel is using its right of self-defense. What kind of a self-defense is this that it is only the Palestinians to die? It is all a game. We face a new crusader alliance.”

His foreign minister, Ahmet Davutoglu, echoed the same sentiment July 20 in a speech at an iftar dinner organized by the youth branch of the ruling Justice and Development Party (AKP). “The main opposition party leader [Kemal Kilicdaroglu] and some others call the Middle East a quagmire. But we won’t let anyone call the Middle East a quagmire,” he said, adding, “This place includes the cave of Hira [near Mecca where Muslims believe Muhammad received his first revelations from God], which enlightens humanity. We will work night and day to remove the colonialists from this region. We will raise the light of civilizations in the Middle East.”

As leaders of a NATO member country, Erdogan and Davutoglu’s statements against the colonialists — while ignoring Turkey’s Ottoman heritage — are certainly attention-grabbing, making one wonder whether they really like Turkey’s direction to be open to questioning. Some analysts also question whether the upcoming August presidential election — first ever by public vote — where Erdogan is running and it is speculated that Davutoglu could become interim prime minister as a result, has any role to play behind this harsh narrative for rallying the people’s support.

By the same token, though, one can also wonder how Turkey can be contributing in building a safer and a peaceful region with such a narrative. After all, Turkey, with its ideological approach to the region, is having only minimal contact with Israel — and with Egypt. The Erdogan government certainly has a strong relationship with the Hamas leadership. In this framework, it is understandable why the Turkish side has never publicly questioned Hamas' administration of Gaza. For example, one needs to wonder whether Erdogan approves of the newly discovered tunnels going into Israel. Israel Pulse writer Shlomi Eldar categorically detailed in his July 20 article that these tunnels or the “underground Gaza” have nothing to add to the welfare of aboveground, or “upper Gaza.” He wrote, “No Iron Dome air defense system has been found as of yet to counter these terrorist tunnels.”

However, when the gruesome pictures depicting the loss of innocent lives, one after another, hit the living rooms, Turks from all walks of life united in condemning Israel for the Palestinian deaths. The catch-22 is that voters seem to have chosen that their leadership make the boldest condemnation possible against Israel, touching their hearts, but they don’t seem to hold their leadership to any credibility test to match the leaders' deeds on the ground. Erdogan knows this public pulse all too well.

The main opposition Republican People’s Party (CHP), however, announced in a surprise move July 21 that a group of its deputies would be traveling to Gaza next week, marking the end of Ramadan. Ozgur Ozel, CHP Manisa deputy, told CNNTurk that the deputies felt the urge to do something in solidarity with the Palestinian people because the government’s Middle East policy has totally collapsed, and that Turkey was left with no political or diplomatic tools helping out the people in Gaza. He also said, “We will use our bodies as a live shield to protect babies from getting killed by Israeli bombs.” The deputies can travel to Gaza either through Israel or Egypt, and it is not clear whether either of these countries will permit them entry at this stage — if the operation continues until then. What is clear is that the Turkey-Israeli relationship has lost all the chances for normalization in the near future.

In a twist of the moment, though, Israel Pulse contributor Yuval Avivi reported just at the beginning of this month, July 1, that the strengthening trade ties between the two countries — quite unprecedented after the 2010 Mavi Marmara incident — has also seen a record number of Turks to travel to Israel both in 2013 and 2014. “A summary of the first five months of the year (January-May) shows that 13,126 Turks visited Israel, compared with 10,056 for the same time frame in 2013, which, as was already pointed out, was a record year for the number of Turks visiting Israel,” he wrote.

Erkan Gural, head of Turkey’s Young Businessmen Confederation, however, would like to reverse this trend. He called July 21 for imposing sanctions against Israel to do that. “We must impose economic sanctions next to our political power and diplomatic sanctions,” he said. “The business world must intervene showing its economic power and show Israel its strongest reaction.” There has been, however, no such reported decision by the Turkish Foreign Ministry or the Ministry of Economy — to date.

Hasan Unal, head of the international relations department at Atilim University, told Al-Monitor that Turkey has no indispensable product that it exports to Israel where the absence of it will put Israel in a difficult situation. “We don’t have power over Israel to impose sanctions,” he told Al-Monitor. “If we, however, decide to impose such sanctions, we may also stop using the Israeli port of Ashdod or Haifa to export our products to the Middle East. Due to the events in Syria, we use the Israeli ports. We don’t have a good relationship with Egypt, and it is also not a good option. And once we decide against the Israeli route, it may also mean to decide against exporting to the Middle Eastern countries. This certainly will not serve Turkey’s interests.”

In the bigger picture, though, Unal stresses that Turkey’s regional policy bears a significant responsibility in all these developments. “The Hamas leadership was based in Syria up until 2011. The Assad regime was their strongest supporter in all ways,” he told Al-Monitor. “When Turkey decided to topple the Assad regime, and persuaded the Hamas leadership to leave Syria, it paradoxically helped Israel. You do not hear any strong statement from Damascus or Tehran today, because both consider that Hamas betrayed them. The AKP government fails to read that people in the region turned against these radical Islamist movements.”

Yet, Turks are divided whether to agree with Erdogan’s portrayal of Israel's “surpassing Hitler's barbarism” — particularly on the social media platforms. And it is that poisonous appeal among people to which Israeli Prime Minister Benjamin Netanyahu replied July 20: “I heard the things the prime minister of Turkey said, words of the utmost gravity,” Netanyahu told reporters. “I told [US Secretary of State] John Kerry, [these are] anti-Semitic statements, they have an anti-Semitic tone.” Israel also warned its citizens against traveling to Turkey.

To sum up, Erdogan insists that his criticism only targets the Israeli government, presenting himself with a higher morality, and that it should not be interpreted as targeting Turkey’s Jewish citizens. Time, however, has repeatedly proven that these things don’t always end up as choreographed, and it would have been therefore more beneficial for all — both domestically and in the region — to have a Turkish leadership that is less emotional.