The strengthening of business ties between the two countries results in an increase in Turkish citizens arriving in Israel, Israeli officials say. 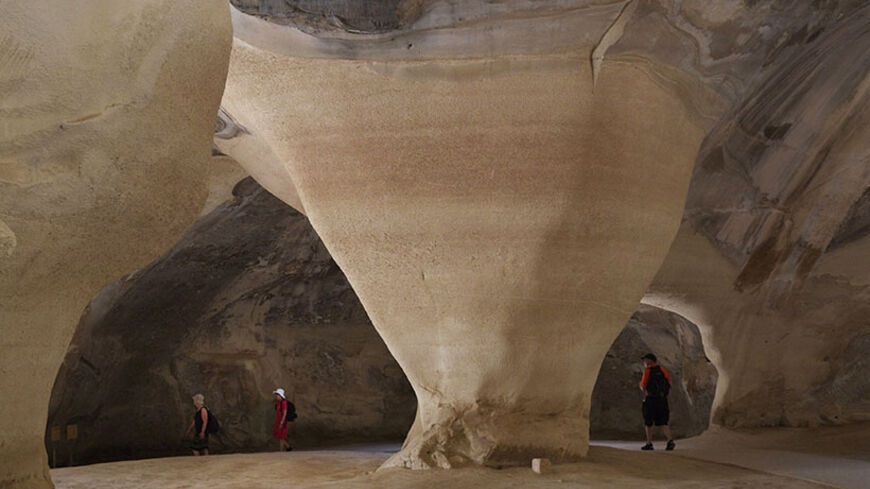 Visitors walk inside a cave situated below the ancient towns of Maresha and Beit Guvrin in the Judean Lowlands, June 24, 2014. - REUTERS/Finbarr O'Reilly

Tourism between Israel and Turkey was traditionally a rather one-sided affair. In 2008, a record year (and a flourishing one) in the relationship between the two countries, over half a million Israelis visited Turkey. But the Israeli Ministry of Tourism cites figures from the Central Bureau of Statistics stating that just 17,253 Turks chose to reciprocate by visiting Israel that same year.

Relations between the two countries have deteriorated since then. The events surrounding the Mavi Marmara flotilla in 2010, extreme statements by Turkish Prime Minister Recep Tayyip Erdogan, the growth of the Islamic elements in Turkey and also the economic crisis resulted in several quite arid years in terms of bilateral tourism.

In March 2010, however, just two months before the Mavi Marmara events, the Turkish Ministry of Tourism invested about $2 million in a campaign to promote Israeli tourism to the country. The miserable timing of that campaign led to its quick cancelation, and the money invested in it was lost.

Nowadays, it looks like something is changing in Turkey. According to figures released by the Ministry of Tourism, 24,385 Turks visited Israel in 2013, including day visitors and cruise tourists. This is an unprecedented number, not only for the years following the Marmara flotilla but also for the years preceding it. In 2006, for instance, 15,791 Turks visited in Israel, while in 2012, the number was 17,161.

Again, by way of comparison, the number of tourists from Jordan has continued to decline in 2014.

This noticeable rise in the number of Turks visiting Israel is all the more impressive considering that Israel’s Tourism Ministry is not going out of its way to market Israel to Turks. The Ministry of Tourism told Al-Monitor, “The ministry markets in a focused and segmented way in those countries with the highest potential for tourism to Israel, like the United States, Germany, France and Russia. Similarly, the ministry markets tourism to Israel in new and developing markets such as China, India and Brazil. We do not market in Turkey because the investment in marketing yields higher returns in other countries.”

The Israeli Ministry of Tourism approached the Turkish market only indirectly. It happened when it invested in a marketing campaign of Israel launched by the organization Stand With Us, an organization that works to improve Israel’s image around the world through public opinion-setters on the social networks. With the support of the Ministry of Tourism and other Israeli bodies, the organization brought some prominent figures on the Instragram social network to Israel, including the Turkish couple Ciller Gacici and Mehmet Kirali. Though they did receive many insults and hateful messages after they posted their beautiful photographs of Israel, there were quite a few enthusiastic comments, too.

Despite these heartening figures, most of the parties involved are convinced that this does not mean that Israel has suddenly been adopted by Turks as their favorite vacation destination. Danny Zimet, a member of the board of the Israel-Turkey Business Council, believes that for the most part, this is about the flourishing business cooperation between the two countries: “Turkey is one of Israel’s 10 biggest export markets. Four months ago, it actually ranked third on the list. In 2013, bilateral trade between the two countries amounted to approximately $5 billion. I estimate, and this is only an assumption, that the increase in numbers is the result of the extensive movement of businesspeople in both directions. I find it hard to believe that a miracle happened, and the Turks started taking interest in Israel.”

Zimet’s comments are backed up by Israel’s Ministry of the Economy and Trade that, unlike the Ministry of Tourism, actually sees great benefit in investing in the Turkish market. They also note that 2013 was a record year in terms of trade between the two countries. The bilateral trade in 2013 rose by 39% compared with 2012. This rise in trade includes a 76% increase in Israeli exports to Turkey.

Zimet also contends that in the business sphere, the Mavi Marmara events had absolutely no impact on the relationship between the two countries. “The extent of bilateral trade barely suffered at all as a result of the events. What did harm it over the past few years was the global financial crisis. Now things are gaining momentum.”

Furthermore, Zimet and Medam are convinced that business relations with Israel are not regarded negatively, in the Turkish street. “They won’t boycott a Turk who does business with Israel,” says Medam. “Just look at the numbers.”

The numbers show that Turkish interest in Israel is greater than ever — for whatever reason. Even if it looks like diplomatic relations between the two countries aren’t improving, the mood in the Turkish street, and perhaps the Turkish pocketbook, proves that there also is another way.