Even before the coronavirus pandemic there was a significant increase in the number of Israelis visiting Turkey, and it seems that the trend continues despite the virus outbreak. 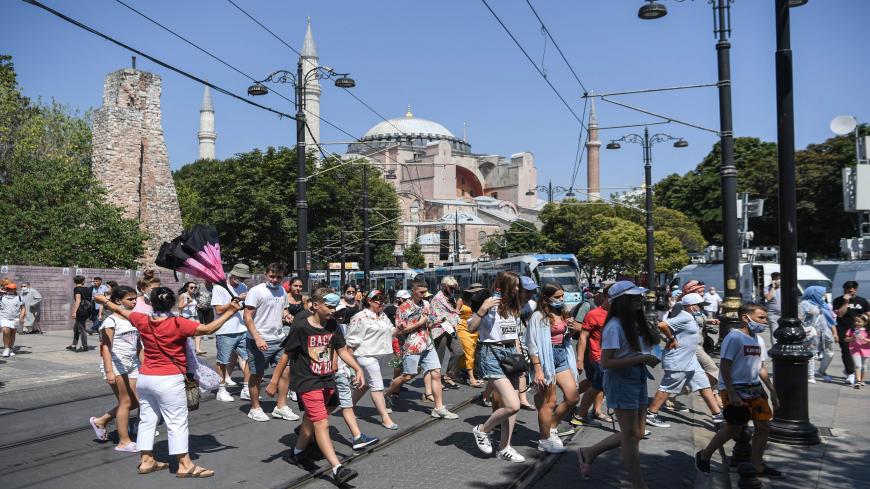 A group of tourists walk past Hagia Sophia as they go toward the historical Sultanahmet district, Istanbul, Turkey, July 28, 2020. - OZAN KOSE/AFP via Getty Images

For many years, Turkey was the top tourist destination for Israelis. All-inclusive deals offered Israeli travelers a vacation at attractive prices, and the deals were snapped up by Israeli tourists wishing to get as much as they could on the cheap. The Turks are considered hospitable and warm hosts, and it seemed that this friendship could never be ruined. Then came the Mavi Marmara flotilla in 2010.

The flotilla that sailed from Turkey carrying hundreds of activists, mostly Turks, sought to break the maritime blockade on the Gaza Strip. When Israeli naval commandos boarded the deck of the Mavi Marmara, they were unexpectedly attacked and were forced to use live ammunition. The result: 10 Turkish activists were killed and an unprecedented diplomatic crisis between Jerusalem and Ankara ensued. Only in March 2013, following pressure from then-US President Barack Obama, did Israel apologize for the event. Later on, Israel agreed to compensate the families of those killed and injured, but this was reconciliation on paper only. Israelis preferred to refrain from visiting the country that was seen to be hostile to them.

According to Ministry of Tourism data obtained by Al-Monitor, until the Marmara incident in 2010, about 600,000 Israeli tourists visited Turkey every year. After the incident the number shrunk to 100,000 a year. The situation has lasted nearly a decade, with ups and downs, until the first significant change was first noted in 2019, when the number of Israeli tourists in Turkey broke a record, crossing 500,000 for the year.

But it seems that the jump in 2019 was not coincidental. A decade after the crisis, it seems that Israelis have rediscovered Turkey, and now it seems, even the coronavirus can't stop the mass tourist flow to Turkey. Although Israel is facing a second wave of infections at the moment, and although the situation in Turkey is not encouraging, flights from Tel Aviv to Istanbul haven’t stopped for a minute, and they are mostly full.

“In the period before the coronavirus crisis there were at least five daily flights from Tel Aviv to Istanbul,” said Shlomo Germon, an Israeli travel agent. He told Al-Monitor, “Today, despite the situation, there are 11 weekly Turkish Airlines flights, and 14 weekly Pegasus flights. There are no fewer than 150 Israelis flying to Turkey every day. This is considered quite a few during coronavirus times, and the numbers keep rising.”

As of today, only a few countries are allowing Israeli tourists to enter their territory without quarantining or showing the results of a coronavirus test. Cyprus and Greece are not letting in tourists from Israel, and neither do most European states. Israelis can enter the United States and Mexico, but these are long and expensive trips, and Asia is virtually hermetically closed to Israeli tourists. As all this is happening, Turkey is the best option and it seems that quite a few Israelis are jumping on this find.

“Turkey is the ultimate destination for the Israeli tourist who seeks a close and inexpensive vacation without the requirement to quarantine on arrival,” Germon said. “This is one of the only destinations that allows Israelis to enter and travel in the country after a sample coronavirus test at the airport. The relative proximity — only a two-hour flight — and the cheap hotel prices attract Israelis, who can now stay at a five-star hotel for $80 a night in August. For such a price, many Israelis are willing to quarantine for 14 days when they return to Israel.”

“Israelis love Turkey,” Dror Nimni, an Israeli tour guide, told Al-Monitor in conversation from Ankara. “The Turks know how to spoil and host their guests, and the Middle Eastern mentality allows for better communication. Israelis feel at home in Turkey and no diplomatic crisis between the two countries can change this. Israelis who arrive here are surprised at the warmth of the Turks and at the fact that the tension between the governments is hardly felt by its citizens. In my opinion, the trend will only grow in the coming years.”

In addition to vacation flights to Turkey, it is also a popular lay-over for a variety of destinations around the world. Germon noted that because of the significant cut in the number of flights from Ben Gurion Airport, the option to fly with Turkish Airlines, which offers a variety of destinations around the world through connections in Istanbul, makes the country attractive. “The United States is in principle the biggest draw from Ben Gurion Airport, and for an Israeli citizen the option of a flight to the United States that connects through Europe is not available as a result of US President [Donald] Trump’s decision to close off the United States to anyone coming from Europe. This decision doesn't apply to Turkey, which makes it a very good stop on the way to New York.”

“There are hardly any tourists from Europe in Turkey, and hotel owners who understand that the Israeli tourist is once more crucial come to me and to other tour guides in order to draw Israeli tourism here,” Nimni added. “In this latest period, they are starting to offer again — especially to Israelis — all-inclusive packages that were once a huge hit especially in Anatolia. The pandemic demonstrates that Israelis and Turks have no choice but to recognize that cooperation between them is necessary, and that politics should be put aside and relations restored to what they were a decade ago. In the end, Israelis don’t have a real alternative to what Turkey has to offer.”