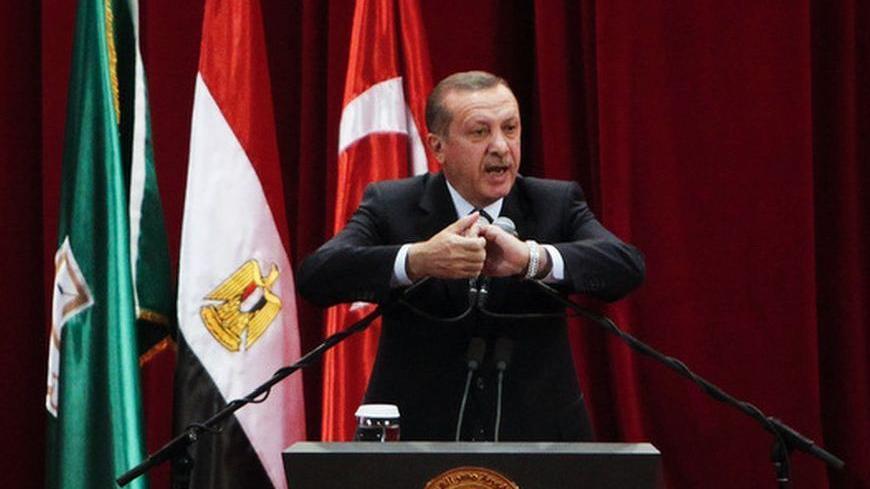 Turkish Prime Minister Tayyip Erdogan delivers a speech at Cairo University after his meeting with the Egyptian President Mohammed Morsi during the first day of his two-day trip to Egypt, November 17, 2012. - REUTERS/Asmaa Waguih

JERUSALEM — Turkish Prime Minister Recep Tayyip Erdogan has taken his already inflammatory rhetoric to another level. After calling Israel a “terrorist state,” he took direct aim at the US role in the Middle east.

“Leading with the US, all the West talks about a two-state solution," Erdogan said Tuesday, Nov. 20. “Where is it? They’re working to vacate Palestine in order to surrender it to Israel […] If we’re going to die, we shall do so as men do. This is not justice.”

Erdogan sent Foreign Minister Ahmet Davutoglu to Gaza today as part of the Arab League’s mission to express solidarity with the Palestinian people. Turkey now demands that the White House officially recognize Hamas as a direct partner and give it assurance on behalf of Israel that if they halt their fire, the Jewish state will do so as well.

In this context, Davutoglu said Turkey is engaged in intensive diplomacy.

“In order to achieve a lasting peace, the blockade that turns Gaza into an open-air prison needs to end […] and it is a must that a Palestine be born within the 1967 borders, making East Jerusalem its capital,” he said.

Erdogan and Davutoglu are convinced that Turkey’s interests lie in their popularity on the Arab street and their ability to whip up the crowds against Israel, rather than in diplomacy, despite a few feints by the foreign minister in that direction.

Here in Jerusalem, their remarks are a reminder that the Turkish-Israeli relationship remains in crisis, not just because of the Mavi Marmara incident in May 2010, in which Israeli soldiers killed nine Turks on a flotilla off the coast of Gaza, but also because Erdogan sees greater leverage for his regional agenda through his leadership and alignment with Islamic currents in the Middle East.

Even before May 2010, the Erdogan government had stopped high-level visits to Israel and demanded that Tel Aviv engage in serious peace talks with the Palestinians and stop settlement expansion.

Erdogan wanted to go down in history as the man who successfully wrote the last chapter of the negotiations between the two sides.

But his ambitious policy only created a dangerous vacuum in the Middle East, where Turkey is no longer in a position to play any role whatsoever to the betterment of the security challenges of this conflicted region.

Turkey’s failed diplomatic relations with Israel have broken his promise of building a peaceful future.

There is no Turkish initiative to heal the wounds of past and present.  Indeed, it seems to go from bad to worse.  And this may unfortunately now lead to more tragedy, preventing the de-escalation of the recent round of fighting between Israel and Hamas.

Yigal Palmor, spokesman for the Israeli Ministry of Foreign Affairs, told Al-Monitor on Nov. 13 that Israel wants to resume diplomatic ties with Turkey and that there is no hostility in Israel toward Turkey, but the recent Mavi Marmara trial in Istanbul is yet another action by Turkey to keep both sides apart.

The trial in Istanbul "is simply a tool to condition public opinion," said Palmor. It may be a convenient political and personal tool to bash Israel, but the absence of any diplomatic leverage undercuts Turkey’s role to one of speech-giver rather than peacemaker.

Erdogan’s remarks show no bending toward Israel’s positions and encourage Hamas not to engage in a ceasefire because the growing Islamist dominance in the region indicates that they now have a stronger position against Israel.

“Davutoglu may be right to condemn Israel for excessive use of force, but he also needs to call on Hamas to stop firing rockets into Israel. But he does not,” said Gareth Jenkins, a senior fellow at the Institute for Security and Development Policy. “The fact remains that, while Hamas is firing missiles into Israeli territory, Israel is much more likely to respond militarily. And any violence plays into the hands of extremists on both sides.”

Erdogan’s position smacks of a double standard in the view of many Israelis.

Ben Eliezer acknowledges that “The Middle East of today is much more radical, much more Islamic, much more religious and much more hating of Israel.” He worries that Egypt has “almost opened the way from Libya and from Sudan for missiles and explosives running through Sinai to Gaza […] We believe Sinai to be almost an autonomous state of terrorists from all over. I don’t believe anyone really understands what’s happening in Sinai now.”

“It’s for our own interests that we want to sit down with [Palestinian leader] Abu Mazen and open negotiations on borders and security arrangements, but [Erdogan] cannot give me conditions. He cannot sit in Turkey and tell me what to do,” says Ben-Eliezer.

“Erdogan could have taken the position of one of the most important leaders in the area,” Ben Eliezer said. “I’m sorry that he took a very radical position against Israel.” Still, he does not consider — like many other Israelis — that the Turkish prime minister’s unequivocal alliance with Hamas, a militant group that is recognized by the US and European countries as a terrorist organization — goes as deep as challenging Israel’s right to exist.

However, Ofra Bengio, a professor at Tel Aviv University, is confident that Turkey’s new position is just that. She argues that both sides have gone too far, and while focusing only on Israel’s mistakes may be politically rewarding for Erdogan, it should not hide Turkish foreign policy’s new attitude toward Israel of vengeance and punishment.

“If they’re taking Hamas' position, then it’s quite clear that they’re aiming at the legitimacy [of Israel],” she told Al-Monitor. “Especially, take a look at Davutoglu. If you read his essays, for him, Israel does not exist.”

Ben Eliezer concurs. “If you ask me where the big change was in [Erdogan's] behavior,” he said, the answer is “Davutoglu! It’s his entry as the foreign minister to the erea, and he was the one who no doubt influenced Erdogan totally against Israel. He has made many mistakes because so far, he could not gain anything.” Before then, he said, he had been able to build a close relationship with Erdogan such that they were able to share jokes and laughter together. He does not believe that Erdogan is anti-Semitic or personally anti-Israel.

The issue is that “Erdogan has inflicted long-lasting damage [to relations with Israel],” said Palmor. Despite the only problem between Turkey and Israel being Mavi Marmara and that Israel was ready to extend an apology and pay compensation for the victims of that incident, later on, the Turkish prime minister added his demands that Israel lift the Gaza blockade.

“We believe this was brought up to hinder and divert any kind of agreement,” said Palmor. Where Turkey stands today on the latest crisis is no different, when it pushes to make any meaningful solution impossible in the name of Islamic solidarity and puts the larger security of the region at risk.