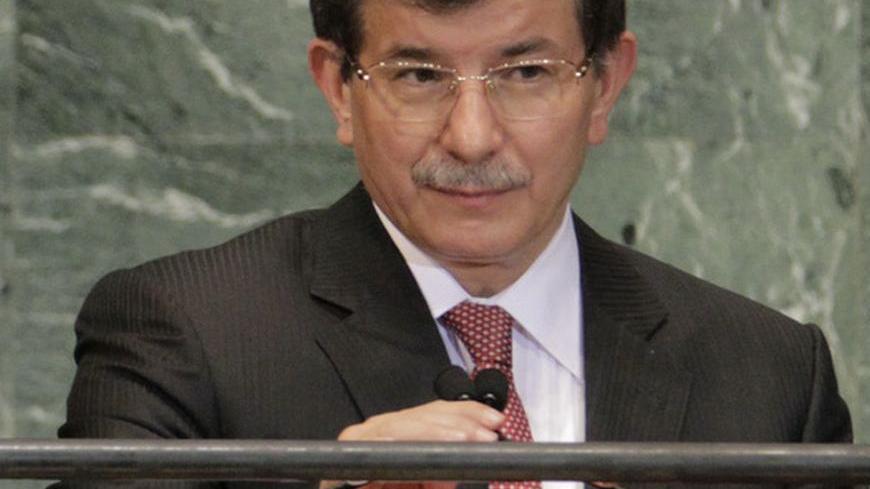 ANKARA — Kemal Kilicdaroglu, the chief opposition-party leader, has called for the resignation of Ahmet Davutoglu, Turkey’s foreign minister and a member of the Justice and Development Party (AKP), over the country’s failed Middle East policies. At the weekly meeting of his own party (the Republican People's Party) on Tuesday, Nov. 27 at the Turkish parliament, Kilicdaroglu called on Turkish Prime Minister Recep Tayyip Erdogan to “dismiss him from his duty; bring any [AKP] deputy in his place. You will see that he will do a better job than Davutoglu.”

Here in Ankara, it is not only the opposition party that is critical of Davutoglu. There are also dissident voices within the AKP, a party that was initially formed as a sort of a social coalition to tamp down the fears regarding the Islamist background of its founding members. Not all are in alignment with the Erdogan-Davutoglu team, but none want to break with party discipline at this time and show disloyalty to the prime minister.

There is as yet no sign that Erdogan is considering replacing Davutoglu, at least for now, as such a move could be interpreted as a sign of the prime minister’s own failures.

“If the prime minister decides to make a change now, it will be interpreted as a confession that his foreign policy has failed. Therefore, I don’t expect him to even consider this thought,” one ruling party member said.

Many are nonetheless concerned that Turkey is getting its priorities mixed up between its national interests and “Islamic solidarity.” For example, when it comes to Israel and Palestine, there are questions as to why Turkey has leveraged its relations with Israel on ending the Israeli blockade of Gaza, which is no threat to Turkish interests. Turkey’s play to the "Arab street" has undercut its previous leverage with both parties and a perhaps its mediating role in a peace process.

Despite Davutoglu’s furious defense of the Egyptian role in the recent ceasefire talks between Israel and Hamas, some party insiders could not resist making comparison between Egypt and Turkey. As a NATO member country with a majority-Muslim population and a growing economy, they question why Turkey could not play a more constructive role instead of losing it to Egypt, a country that’s still searching for political stability and dealing with massive economic troubles.

“In the past, they used to come to us first when there was a problem in the Middle East,” said Kilicdaroglu. “Iran and Iraq fought for eight years. Neither of the two countries said Turkey is taking sides. Turkey remained neutral. There is now a Turkey dragged into the Middle East quagmire.”

Strangely enough, from what Al-Monitor gathered in Ankara, not all members of the ruling party would disagree with Kilicdaroglu. On the contrary — there is concern as to whether Turkey is on the verge of miscalculating the regional balance and therefore risking the possibility of isolating itself in the diplomatic arena.

While today Erdogan might see removing Davutoglu as a signal of his own failure, if the pressure builds — especially within the AKP — such a move could be a means of distancing the prime minister from this failure. For the past few months, Turks have been watching and listening to their foreign minister on the defense, explaining his policy steps concerning Syria, Iraq, Iran, Egypt and Gaza at the parliament or on television programs. Given the many uncertainties in the region, there is a growing chorus of people from all walks of life wondering whether Davutoglu has taken Turkey on a joyride, risking its political and economic stability at home. The party insiders argue that if things get more complicated in the Middle East, that may push Erdogan to search for a formula to “kick him upstairs” in order to keep Davutoglu’s integrity and honor intact, but away from the foreign ministry.