Rebel fighters and civilians in rebel-held east Aleppo have launched a collective initiative to combat an expected siege by government forces. 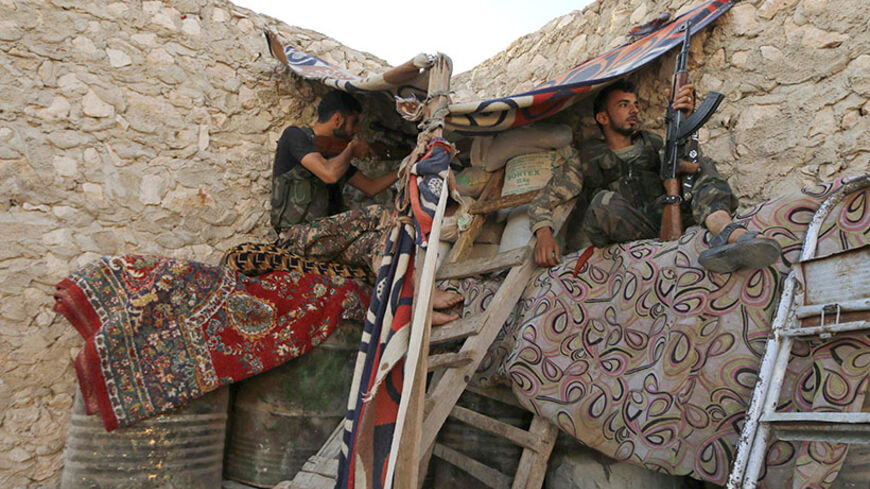 ALEPPO, Syria — A little before dark, large numbers of people line up in an orderly fashion near a charity that has announced it will be distributing daily meals to poor families during Ramadan.

These days, one doesn't see the throngs of people in the streets typical of Ramadan. Many of the inhabitants have fled, some killed and others wounded by the barrel bombs the Syrian regime drops daily. There are a few nearly empty shops selling cleaning supplies, fuel, tobacco and children’s games and a few vegetable and bread carts.

The neighborhoods of rebel-held east Aleppo have suffered such massive destruction and exodus that when walking the streets at night, it feels a place struck by a deadly plague. The next second, one hears a sound in the sky getting closer at frightening speed. It's a regime helicopter, and it will certainly find a target. People begin to flee left and right toward the entrances of buildings and shops. A man screams, “Don’t group together! Scatter, scatter!” Another voice yells, “Oh, God. Oh, God.”

The aircraft drops its deadly payload, which explodes in the distance. People ask questions, including one woman who wonders, “Where did it drop? Who’s there? Don’t let them die. Oh, my Lord.” They quickly return to the food line to get their rations and disappear before the evening call to prayer.

The area that the helicopter targeted is far from here, but it elicited concern and unease among the civilians in a number of neighborhoods. “That is how it always is,” said Abu Fares Muhammed Rujub, a teacher and Aleppo resident.

I asked Rujub how he's preparing for the regime siege that will befall the rebel-held part of Aleppo. He responded with anguish, “The wealthy stockpile, the poor depend on charitable institutions or swindle, and the poorest have nothing but the grace of God. Generally speaking, there is little stockpiling in the proper sense of the word. No one is able to stockpile medicine. As you know, we are a people who don’t listen to reason, but depend upon God’s grace.”

Rujub further went on: “There are no more than 100,000 people in liberated Aleppo. As I said, every one of us awaits the death sentence — that is, we await our fate.” Though the population figure he quotes is unconfirmed, his words convey the sense of dejection, loss of hope and exhaustion that has descended upon him, his family and the streets of this ancient city.

When asked about the role of Aleppo’s local council in these quarters, Rujub responded sharply, “Those working for the Aleppo City Council [an opposition organization] are practically unable to deliver services because they lack material and logistical and human resources. As for electricity, those who are under the council’s authority receive four hours of electricity a day, while those under the jurisdiction of Jabhat al-Nusra receive 18 hours. That is the dilemma that I myself have faced with the local administration. At the Salihin police station, which belongs to Jabhat al-Nusra, an official told me, ‘I wrote in the local council’s record book that you are no longer under their care, and I will provide you with electricity from the Jisr al-Hajj station.’ So I said to him, ‘If you do this, who will provide the sanitation workers’ wages for people of the neighborhood?’ The Nusra official responded, ‘We will.’”

Wiping his glasses with a cloth, Rujub added, “What I understood from them, my friend, is ‘If you’re with me, I’ll provide for you, but if you’re not, you’re destitute.’ I said to them that I’m not in free Aleppo, I’m in forsaken Aleppo.” What Abu Fares describes is a recurring scene for many residents and most municipal services.

The day after meeting with Rujub, Al-Monitor went to the eastern quarters, to the Mashhad neighborhood, where there are a multitude of shuttered and destroyed shops and a number of cars destroyed by barrel bombs.

We met Muhannad Ghabash, an official from a collective initiative of utility workers, civilians, activists and fighters called The Sword of Aleppo for the People of the Levant. Ghabash had been held by Syrian Military Security and Air Force Intelligence for a year and a half, accused of working with the rebels and aiding their movements in the city. He explained the objective of the initiative: “It is clear to everyone that the ghost of the siege haunts Aleppo. Our initiative is independent and aims to unite our ranks, coordinate the efforts of Aleppo’s steadfast revolutionaries [fighters and civilians], engage in medical, emergency and distributive efforts, put our society’s energy to good use and lift some of the burden from armed rebel groups, including preparing engineering projects and building barricades. The initiative also guarantees food distribution and frees the energy of the fighters to concentrate on fighting. It bears all of the other burdens of supporting the fighters, including food distribution, engineering works, media support, medical services and maintaining the popular movement that supports citizens and revolutionaries.

“For civilians, the initiative has opened safe routes and raised barriers along the road to ensure safe passage to and from Aleppo. It has secured alternative routes on the eastern and northeastern fronts of the city, because of the many difficulties caused by aerial bombardment. These difficulties stem from a lack of capability and a scarcity of material supplies, including trucks, food supplies and machinery for removing rubble. Nevertheless, we do what we can to lighten the burden of the siege on the city.”

Despite the intent of these activists to resist the impending siege, it is hard to see how those who remain will manage affairs and administer services while living in such harsh conditions, an environment full of disease, bombardment and pain. But this is Aleppo. This ancient city and its citadel have seen armies and empires come and go for centuries, and through it all, the city and its people have endured and will continue to do so.