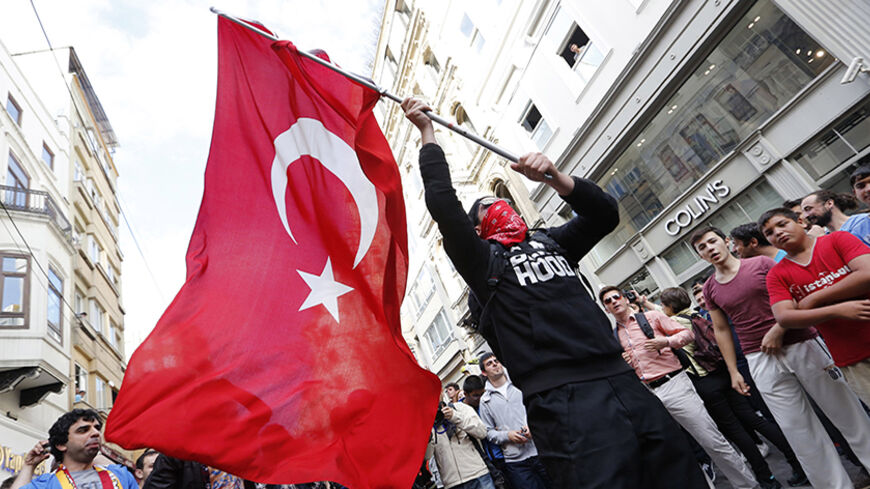 A masked demonstrator waves a Turkish flag during a protest in central Istanbul, May 31, 2014. - REUTERS/Murad Sezer

COPENHAGEN, Denmark — Spending the second half of the past week in Copenhagen on the occasion of the 62nd Bilderberg conference, I had the occasion to meet with scores of international luminaries who in turn found the opportunity on the sidelines of the event to grill me about Turkey’s Prime Minister Recep Tayyip Erdogan.

Copenhagen hosted the 2014​ Bilderberg conference, with about 140 participants from 22 countries in attendance. It was, as ever, a diverse group of political leaders and experts from government, industry, finance, academia and the media.

As stated on the website, "The conference is a forum for informal discussions about megatrends and major issues facing the world. The meetings are held under the Chatham House Rule, which states that participants are free to use the information received, but neither the identity nor the affiliation of the speaker(s) nor of any other participant may be revealed."

However, being the first such forum to be followed by many, and having gained a notorious reputation during the Cold War, many around the world associate Bilderberg with a "world secret government." Abiding by the Chatham House Rule only reinforces its secretive image.

As a matter of fact, there are no secrets about who attends and what will be discussed during the panels. The lunches, cocktails and dinners provide additional opportunities for networking among the participants, many of whom are influential high-office holders with impressive titles.

To be subjected to questions about Erdogan during a gathering of such luminaries was of particular interest to me. Yet, what was asked and how it was asked was even more interesting. In a near consensus, they probed not "what went wrong with Erdogan," but "when and why it went wrong with him." Asking such questions implied that, nowadays, something is "going wrong with Turkey."

"What happened to him? Why? When exactly?" People successively asked these questions about Erdogan, which were also pertinent to the issues of Turkey.

I tried to point out the political rationale behind Erdogan’s decision-making to rule out the view that his recent conduct is an outcome of sheer madness — a view that many observers hold, not only in Turkey but all over the world.

Steven Cook, an expert on Turkey at the Council on Foreign Relations, provides a similar argument in a June 2 blog post:

"There is a lot that seems inexplicable about Recep Tayyip Erdogan’s recent conduct. In the last few years, the Turkish prime minister has squandered the good will of many of his citizens and his counterparts around the world. Erdogan once represented a kind of Turkish 'third way' (as cliche as that sounds) in which political reform and compromise were combined with economic liberalism and a consciously Muslim identity, but now he is mostly known for bluster, intimidation, and the reversal of the impressive political reforms of 2003 and 2004. The prime minister’s routine bullying of his opponents seems rather unnecessary given his mastery of the Turkish political arena."

Then, he moves on to a disputable historical narrative to explain Erdogan’s current discourse, followed by his concluding remark: "It also provides a clearer picture of Erdogan. The Turkish prime minister may seem off, but there is every reason to believe that he knows exactly what he is doing."

A commenter on Cook's blog, Raja M. Ali Saleem, whose dissertation is on religious nationalism and state Islamization in Pakistan and Turkey, shares Cook’s observation on Erdogan. “Right. People keep saying that Erdogan is mad. However, as Shakespeare wrote about Hamlet, 'Though this be madness, yet there is method in it.'"

Whether there is a method to it or not, Erdogan proved to be as confrontational and "Don Quixote-like" as ever when he attacked everyone from a CNN reporter to Turkey’s central bank governor in his weekly Tuesday speech.

He accused CNN reporter Ivan Watson of being "an agent to foment trouble" in Turkey, hardly comforting conduct for anybody with even the slightest concern for press freedoms. "These people don’t care about press freedoms and things. It is as if they are here as agents," said Erdogan.

In response, CNN told the daily Radikal, "We stand unequivocally by our reporting from Turkey, which has been and continues to be fair, factual and impartial."

It's clear that Erdogan has lost his power to intimidate media outlets and politicians across the continent. Cem Ozdemir, the co-chairman of the German Greens, has been the target of Erdogan’s harsh remarks. Recently, he responded equally severely and declared he would continue to criticize Erdogan, as long as he violates human rights.

Yet, Erdogan’s polemics against Erdem Basci, Turkey’s central bank governor, may have worked. Basci has resisted Erdogan’s interference in lowering interest rates. The Turkish inflation figures were disclosed June 2 and they were surprisingly high, the highest in a very long time.

Erdogan directed the arrows of criticism toward Basci without hesitation. He said, "I definitely do not find Basci’s approach to interest positive. Inflation figures have been announced. They are not coming down."

Before Basci could respond to Erdogan’s criticism, the US dollar — seemingly sensitive to interventions from unwarranted sources — jumped to new highs against the lira.

Internet Haber reported: "Because of deterioration in developing markets and Erdogan’s criticism of the central bank, the dollar rate went up to 2.11 Turkish lira after falling to 2.0965 Turkish lira after the announcing of the inflation rate."

While we may go on speculating about the reasons behind Erdogan’s conduct, for Turks of democratic convictions and for people in the outside world, the prime minister has seemingly become more of a liability than an asset in terms of how Turkey is perceived.