Following a vast campaign designed to rebrand the West Bank settlements as tourist attractions with guided tours to biblical sites, and to open it up to the Israeli mainstream, the region has become popular with tourists from Israel and overseas. 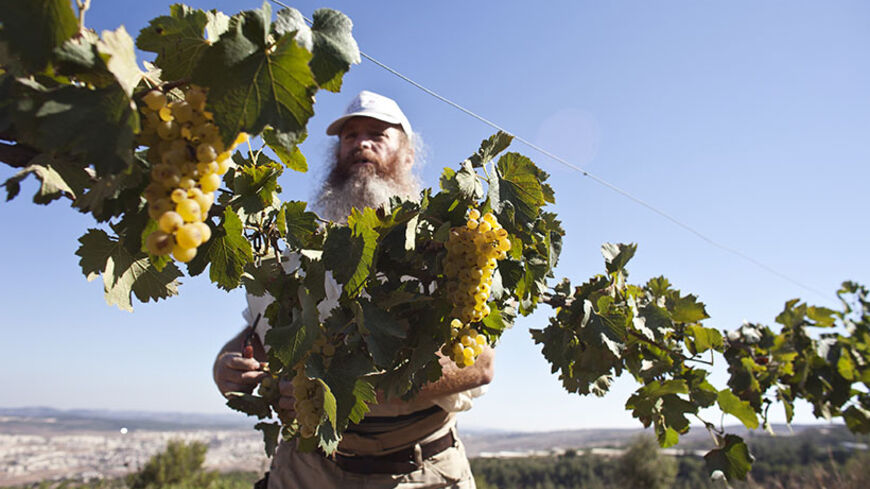 A vintner harvests chardonnay grapes in his vineyard near the West Bank Jewish settlement of Bat Ayin, Aug. 20, 2012. - REUTERS/Nir Elias

In April, hundreds of thousands Israelis spent Passover touring the country, just as they do every year. Over the past few years, many Israelis have chosen to visit the sites of Judea and Samaria as their preferred holiday destination. This trend is no coincidence. After years of straddling the delicate boundary between legitimacy and illegitimacy within Israeli society, the people of Judea and Samaria decided to switch tactics. Instead of fighting for the diplomatic legitimacy of the settlement enterprise, they launched a vast tourist campaign to turn Judea, Samaria and the Jordan Valley into a legitimate tourist destination among the Israeli mainstream.

Publications in 2011 indicated that they have set their goal at half a million visitors in five years. The settlers' tourist campaign recruited at the time Ze'ev Revach, one of Israel’s most popular veteran actors, to represent it, and the main media outlets have also given special treatment to this new initiative.

And, indeed, Israeli public opinion changed rapidly. Visiting sites across the 1967 line has become more and more legitimate. Already before last Passover it was reported that "160,000 people had visited so far [in the last three years]."

This trend of visiting Judea and Samaria is not limited to national tourism, either. Many tourists from overseas also want to visit the area because of the region's rebranding as the Israeli “Wine Route,” the numerous mountain bike routes available and, of course, the biblical sites that draw many Christians.

Simultaneously, it seems as if the settlers have come to recognize the inherent economic potential in the settlements, and are now opening their homes to visitors. A quick visit to the Airbnb website — which offers tourists rental apartments — shows that numerous residents of Judea, Samaria and the Jordan Valley offer inviting accommodations to tourists. For example, in the tiny settlement of Etz Efraim (with about 860 residents) a spacious, six-bedroom house with a swimming pool, basketball court, barbecue area and pool table is offered for 1,200 Israeli shekels ($350) per night.

In contrast, the site also offers the option of sleeping in a Bedouin camp in the settlement of Efrat, in what is a kind of Israeli-Palestinian joint venture, between Yarin Yemini and the Haj Ali Ouda family. For 356 shekels ($100) per night, visitors are offered an authentic Bedouin experience, “in keeping with the nomadic Bedouin tradition,” and perhaps even some sense of coexistence.

And there’s more. Efrat offers three rooms at a bed-and-breakfast for 470 shekels ($136) per night; the settlement of Nokdim, home to Foreign Minister Avigdor Liberman, offers a small apartment overlooking a beautiful desert landscape for a negligible price; Karnei Shomron settlement offers a guest house along with tours of the region in the spirit of the Bible and tradition; and the ecological settlement Rotem in the Jordan Valley offers a nice cabin with the option of participating in couples’ workshops.

Advertisers on the site indicate that there has been a dramatic shift in tourism in Judea and Samaria over the past few years. Shalom Tal from Kfar Adumim has been offering for a year now a suite in his home with a view of the desert for 380 shekels ($110) per night. He thinks that the field is “developing and expanding rapidly.” He told Al-Monitor about his friend who started renting out one room in his large home in Efrat. It took his friend some time to realize that what he had was a gold mine, but when he finally realized this, he turned his entire house into rental units and went to live somewhere else. “That’s how much business he has,” Tal said.

Tal himself recently hosted a family from the Czech Republic and another family from France, “who were in Tiberias, on their way to the Dead Sea. They decided to stop halfway and spend a night with me.”

After advertising on the site for three years, Yemini has also noticed the change. “We get lots of tourists. There is a lot of interest. The absolute majority is not Israeli either; most visitors are from Europe and the United States, and most aren’t Jewish either.”

When asked what tourists are looking for in this specific area, Yemini said: “They are looking for tranquility. They want to tour the desert. They see it as some place different and unusual, and that intrigues them. In my case, what draws them is also the unique nature of the experience. It is a chance to become familiar with the Bedouin way of life.”

David Zviel only recently began to advertise on the Airbnb website. He lives in Psagot, and wants to rent out the family office, for a particularly low price. “I am amazed at how many requests for information I get,” he said. “They come from all around the world, and most of them aren’t from Jews. At first, I got just two requests a month. Now I am getting five or six a week.” He said that many people who have bungalows and rooms for rent do not even advertise because they are booked solid anyway.

“I may live in a religious settlement,” he said, “but I want to open my door and host people who stand out from the social homogeneity of the settlement. I think that the best thing that could happen to us is that people from all over the world come here and see that we lead a completely normal life.”

He said that not all of his neighbors think the same way. “I have an ongoing argument with some of the other residents. They are worried about it and ask, 'Would I let a non-Jew into my house?' But if we get past that obstacle and succeed in creating a new platform, it will be wonderful. There is plenty to see here, tourist-wise and culturally. There has been enormous development over the past few years, including bike routes, four-wheeler tours and the development of heritage sites.

Among the problems faced by the people of Judea and Samaria are the technical glitches on the Airbnb website. “The search engine on the site sends you directly to places with high demand. It sends you straight to Jerusalem,” Zviel said.

Yonatan Bazak of Tekoa has a different problem. He offers an apartment for 250 shekels ($72) per night, but he is unable to define Tekoa as a locality, so his property is described as being in Jerusalem. “Quite a lot of people contact me, but some are discouraged when they realize that the property isn’t in Jerusalem per se but slightly east of the city. Many changed their minds when they heard where Tekoa is located. Some of these were religious Jews, who wanted to walk by foot to the Western Wall, which is, of course, impossible. Apparently, some were scared as well.”

As far as the boycott of the settlements is concerned, advertisers on the site say that they don’t notice it: “There hasn’t been any negative reaction about the region until now,” Zviel and Tal said. Yemini said, “A few have had second thoughts, but for the most part that happened after terrorist attacks were in the news. Their reservations had to do with fear, not the boycott.”

It is worth noting that the Airbnb website did not respond to our question whether they have a problem advertising Israeli properties situated in an area that many countries consider as an illegitimate area, and hence destination.

Yemini summed up our conversation on a positive note: “There’s one more thing I’d like to say. Peace. I live it, and it’s a very special feeling. You start with an inner feeling of peace, and it spreads outside from there.”