Turkey’s ruling party has drafted a bill that puts the peace process with the PKK in a legal framework, which is also seen as a means for the AKP to win Kurdish support in the August presidential elections. 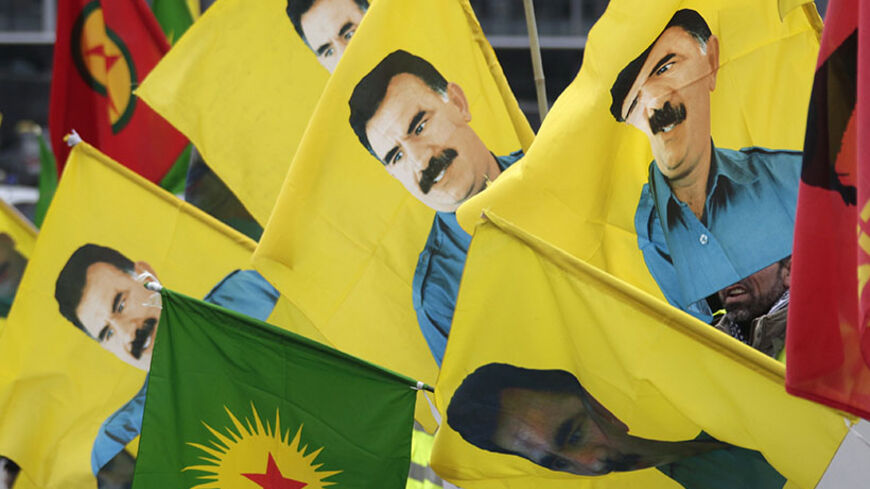 In a major step to remove the climate of mistrust in the Kurdish peace process, Turkey’s Justice and Development Party (AKP) has submitted to parliament a draft bill designed to secure legally the negotiations with the Kurdistan Workers Party (PKK). The bill — called “Law to End Terrorism and Strengthen National Togetherness” — aims to create a legal shield for the direct and indirect talks the state has been holding with jailed PKK leader Abdullah Ocalan on the prison island of Imrali and senior members of the PKK and the PKK-linked Kurdistan Communities Union (KCK), based in Iraq’s Qandil Mountains and Europe. With the PKK listed as a terrorist organization, the talks can be easily classified as a criminal activity under Turkey’s existing law. On the state’s behalf, the talks are being conducted by the National Intelligence Organization (MIT), while senior members of the Peace and Democracy Party (BDP) and the People's Democracy Party (HDP) have acted as intermediaries on the Kurdish side.

A couple of years ago, prosecutors had launched an investigation into MIT officials over several rounds of talks with the PKK held in Oslo in 2009, which prompted the government to pass legislation that conditioned investigations against the MIT chief on the prime minister’s permission, thus providing legal protection for the state wing in the talks. Ocalan and the BDP-HDP delegation, for their part, had long called for a “legal framework” to keep the process on track.

Here are the main points the draft envisages:

The timing of the bill — drawn up in the runup to the August presidential polls — is seen as an electoral maneuver by Prime Minister Recep Tayyip Erdogan, who needs the Kurdish vote. In the preamble, the government emphasized that far-reaching steps, amounting to a “silent revolution,” had been taken since 2002 to boost citizens’ trust in the state, and that bloodshed had stopped over the past 19 months as a result of the negotiating process.

If the bill is approved, the reference to “contacts with individuals, entities and institutions at home and abroad” will legalize talks with PKK-KCK leaders in Imrali, Qandil and Europe, while the reference to “individuals assigned tasks” will shield public functionaries involved in the process. The draft envisages no explicit protection for the civilian Kurdish negotiators, known as the “Imrali delegation.”

The reference to “ending terrorism” in the bill’s title is considered to be flouting the spirit of the peace process, but the Kurdish side is unlikely to make much of a problem out of it.

The HDP delegation visited Ocalan on Imrali island right after the bill’s submission to parliament and said that the PKK leader had welcomed the draft as a “historical development.” HDP co-chair Selahattin Demirtas said, “There are some problems in the bill’s title and preamble, which we are going to discuss. Despite the shortcomings, we see the bill as important. … Its approval will require the government to pass laws on eight topics. Legislative arrangements will facilitate steps on the ground. We can say that, with the bill, negotiations will start [in earnest] for the first time.”

Deputy Prime Minister Besir Atalay defended the bill, saying that it would “lay the ground for all state institutions to make contributions to the process.” The opposition, however, was divided.

Republican People's Party (CHP) parliamentary whip Engin Altay described the bill as a “maneuver to grab the Kurdish vote at the presidential elections,” but added that CHP would “have no negative stance toward the bill.”

True to style, MHP parliamentary whip Oktay Vural, whose party sees the negotiations as treason, reacted in harsh language: “Erdogan’s signature [on the bill] goes together with the signature of the terrorist chieftain [Ocalan]. The AKP and PKK together are making laws that would break the country up. The terrorists failed to divide Turkey for 30 years, but the country is now being brought to the brink of partition in the name of Erdogan’s political future. The bill states, 'Individuals, assigned tasks within the scope of this law, will be free of legal, administrative and criminal liability.' If that’s the case, the bill takes its inspiration from [1980 coup leader] Kenan Evren, who had put Temporary Article 15 [in the constitution] to escape any accountability for what he did during his military rule. But he was convicted 34 years later [last week]. This piece of paper won’t save you either.”

The bill sparked a comprehensive debate in the media as well, with veteran Radikal columnist Tarhan Erdem criticizing its title: “The bill should have been titled 'A Law to Strengthen Democracy and Togetherness,' for terrorism is not a cause but an outcome.”

What happens without legal cover?

Back on Feb. 8, 2012, prosecutors had summoned MIT officials for questioning as part of a probe into the KCK, after an audiotape of 2009 meetings between MIT officials and PKK representatives in Oslo was leaked to the media. Participants included Hakan Fidan — the incumbent MIT chief who was then Erdogan’s deputy undersecretary — and then-MIT Deputy Chief Afet Gunes, senior KCK member Mustafa Karasu and senior PKK members Sabri Ok and Zubeyir Aydar.

The government responded with an instant amendment to the MIT Law. The amendment, passed on Feb. 15, 2012, conditioned the questioning of MIT officials on the prime minister’s permission, thus saving MIT members from the investigation. When a second probe targeted Fidan in 2013, Erdogan refused to allow his interrogation.

Separately, the media reported in May 2013 that a prosecutor in Ankara had launched another investigation over the Oslo talks, which targeted 40 people, among them Erdogan, Fidan and then-Interior Minister Besir Atalay, on charges of “establishing and running the KCK.” The government moved the prosecutor to a new post to thwart the investigation.

Judicial investigations were launched also over the 2009 welcoming at the Habur border crossing of 34 PKK members and supporters who left PKK camps in Makmour and Qandil in Iraq and returned to Turkey as part of a campaign calling on PKK militants to lay down their arms. Prosecutors later brought charges carrying sentences of up to five years in jail against 17 people from the group on the grounds they spread propaganda on behalf of a terrorist organization at a press conference following their arrival.

Former Kurdish parliament member Hatip Dicle also landed in court after he said the interior minister had given assurances that “prosecutors and judges have been arranged” to ensure the problem-free entry of the PKK group from Iraq. Dicle made the remarks as prosecutors were flown by helicopter to the Habur border crossing for a procedural questioning of the group members, and then a judge was brought in an armored vehicle to question the five who were supposed to appear before court.

Similarly, when armed PKK militants began to pull out from Turkey last year, the local authorities were advised “to look the other way” to prevent any “accidents” in the absence of a legal ground guaranteeing the withdrawal.

So, the bill had become a necessity to fend off judicial onslaughts and secure the settlement process. Yet, due to its timing coinciding with the runup to the presidential polls, it is seen as a bid by Erdogan to secure the crucial Kurdish vote, as the opposition points out.