Provocations in Turkey as Kurdish peace process gets serious

Turkey’s peace process with the Kurds faces a major test amid explosive incidents apparently aimed at shaking the determination of both the government and the Kurdish side. 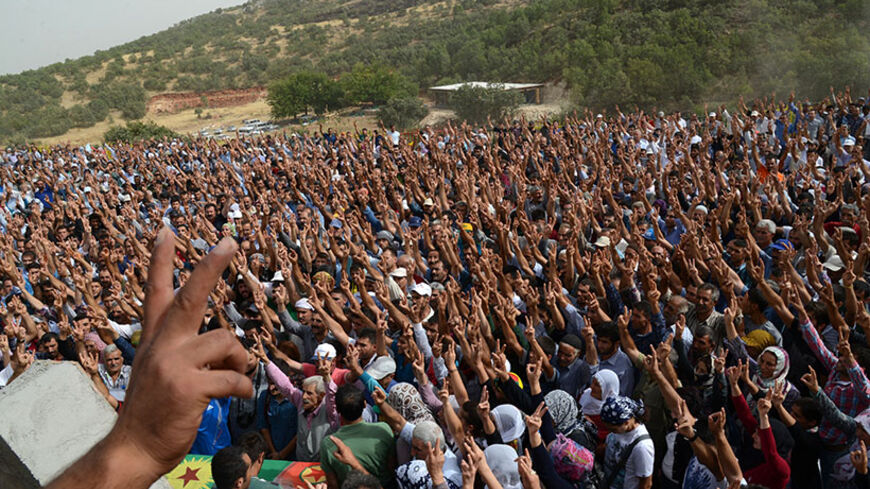 People flash the victory sign as they attend the funeral ceremony of Mehdi Taskin, 24, a Kurd who died during clashes that erupted between protesters and security forces near Diyarbakir, Aug. 19, 2014.

What course will the Kurdish peace process take after President-elect Recep Tayyip Erdogan moves to Cankaya Palace? This is Turkey's most critical question these days. Both the government and the Kurdish side have made encouraging statements to dispel the uncertainty, but the process, swayed by constant ups and downs, is certainly not immune to incidents that may cause its derailment.

Take for instance the killing of three Kurdistan Workers Party (PKK) militants — despite the cease-fire — in two separate incidents in Van province. According to media reports, the first incident on Aug. 7 was the result of soldiers “firing at PKK members who defied warnings to stop.” Yet, Kurdish sources told Al-Monitor that it involved a sniper assassinating a regional PKK commander.

The most rattling incident occurred in Lice, a district near Diyarbakir, the largest city of the mainly Kurdish southeast. On Aug. 15, the 30th anniversary of the PKK’s first armed action in 1984, a statue of PKK founder Mahsun Korkmaz was erected in Lice at a memorial cemetery dedicated to slain PKK guerrillas, inflaming Turkish nationalist sentiment against the peace process. Following a criminal complaint by the Diyarbakir governor’s office, a court ruled on Aug. 18 that the monument should be demolished. Paramilitary police tore down the structure the following day in an operation that claimed the life of one person and left two others injured.

Well, who would erect a monument whose demolition was a foregone conclusion, and for what purpose? Why did the public authorities stand by while the monument was erected? Why were military means used in a crisis that could have been overcome through dialogue? Not surprisingly, the prevailing question on social media was: Why did you look the other way if you planned to demolish it?

Was this episode a sign of government insincerity or a provocation? It was the government that initially came under fire, for only recently Prime Minister Recep Tayyip Erdogan had employed hostile language against the Kurds after he saw his vote shrink in Kurdish-majority constituencies in the Aug. 10 presidential polls. His decline came amid soaring support for his Kurdish contender Selahattin Demirtas, the co-chair of the People's Democracy Party (HDP).

“Hakkari is not a province unfamiliar with us. We are present in the field there and the people see our services. But the people’s will is suppressed despotically, through intimidation and armed force,” Erdogan said, referring to the PKK. “We will respond in kind to those who have usurped the people’s will with the threat of arms. We have to speak the language they understand, using all means the Interior Ministry and the Turkish Armed Forces have.”

In response to Al-Monitor’s question about whether the Lice episode could harm the peace process, HDP lawmaker Nazmi Gur offered the following assessment: "It is still premature to talk about fragility in the process. It could well be certain dynamics within the state moving into action. The release of the Ergenekon folk [soldiers and civilians who were tried for alleged coup plots] and some of them returning to duty may lead to attempts of sabotage and obstruction. Nevertheless, the responsibility rests with the government.

"The policies the Justice and Development Party [AKP] pursues will be important. The Lice incident could have been resolved through dialogue, but they blew it out of proportion and used military force, which shows that opponents of the peace process are increasingly gaining strength. This is a cause of concern. Such crises become possible because the sacrifices are expected only from the Kurds, and the government’s approach is to conduct the process the way it likes. What matters for us is to make sure that the process does not become fragile."

The monument in Lice became an “unresolved case,” as no one claimed responsibility for its erection. Gur, however, stressed that they publicly protested the demolition across the country. “I wouldn’t comment on who was responsible for erecting the monument. It was a monument of a leader of the Kurdish struggle, built by people who admire him. What we have here is an attack on the values of the Kurds,” he said.

Luckily, the crisis was followed by prudent steps and statements to help keep the peace process on track.

Deputy Prime Minister Besir Atalay, who is in charge of the process, stressed that both the government and the HDP saw the Lice episode as a provocation. “The monument controversy erupted on a day when both I and the delegation [of HDP members holding meetings with jailed PKK leader Abdullah Ocalan] were making important statements, with things seriously moving forward. It was first a story reported in a couple of newspapers and then people unhappy with the settlement process began to make comments,” Atalay said in an interview with the NTV news channel. “This is a provocation targeting the process. … We had contacts with the HDP delegation and they, too, were unaware [of the monument issue]. In their point of view, it was a provocation as well.”

The “serious things” Atalay mentioned include the Aug. 14 meeting that National Intelligence Organization (MIT) chief Hakan Fidan had after a long hiatus with Ocalan on the prison island of Imrali, where the PKK leader is serving a life sentence. According to the Cumhuriyet daily, the unrest in Lice prompted Fidan to bring the meeting forward and give Ocalan assurances that “Erdogan will continue to be the chief supervisor of the process after he assumes the presidential office.”

The assurances are widely interpreted to mean that the process will keep going regardless of who forms the government in the wake of Erdogan’s move to the presidency. Fidan, a key figure in the peace process, is expected to become foreign minister to replace Ahmet Davutoglu, who was officially nominated as the new prime minister of Turkey by Erdogan on Aug. 21. On Aug. 15, following his meeting with Fidan, Ocalan was paid a visit by the HDP delegation, through which he conveyed the following message: “A 30-year war is in a phase of conclusion through a grand democratic negotiation.”

The parties appear so confident over the peace process because of a new road map, which Atalay said would be finalized in late September, speaking on the very day the monument was erected in Lice.

Atalay said the Public Security Undersecretariat (KGM) would now join the MIT in the talks with Ocalan. A law, passed by parliament in June to lay legal groundwork for the process, has already tasked the KGM with coordinating the undertaking. MIT-KGM delegations are now likely to also hold direct talks with PKK leaders based in Iraq’s Kandil Mountains and Europe. Other leaks to the media suggest that journalists or “wise people” will be allowed to go to Imrali to meet with Ocalan, something the PKK leader has long asked for. There will also be a monitoring team to supervise the implementation of the road map, which will be drawn up through negotiations.

The Kurdish side remains committed to the process, but wants to see action on the ground after much zigzagging on the government’s part. In remarks reflecting the sentiment on the Kurdish side, Gur said, “It is important to see what preparations the government makes and whether serious negotiations are held to make decisions on outstanding topics and whether those decisions are implemented on the ground under the supervision of a monitoring team. The Kurdish side has all the commitment for a negotiated conclusion of the process.”

The government’s future is closely related to progress in the peace process. First, those that Erdogan has declared enemies at home are keen to use the Kurdish process to undermine the government. Hence, backpedaling from the process is not an option. On the external scene, the PKK is acquiring a new international vision now that it has joined the war against the Islamic State in Iraq and Syria. Hence, the peace process cannot lag behind external developments that raise the prospect of the PKK being removed from international lists of terrorist groups.