After the violence in Lice, are Turkey and the Kurdistan Workers Party (PKK) on a path to resumed violence? 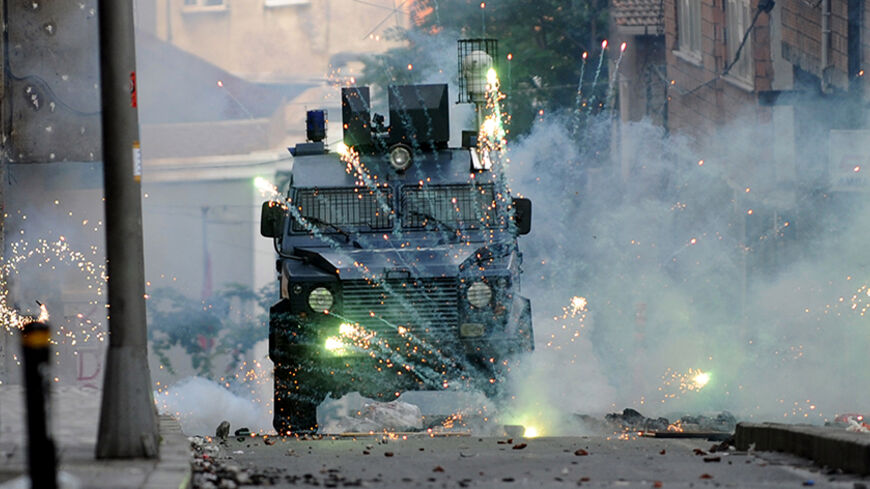 Fireworks thrown by Kurdish protesters, following the death of a man in Lice the night before, burst in front of a riot police vehicle during clashes with police in the Okmeydani district in Istanbul, June 8, 2014. - AFP/Getty Images/Ozan Kose

The prevailing mistrust between the ruling Justice and Development Party (AKP) in Turkey and the Kurdish insurgent Kurdistan Workers Party (PKK) and its followers led to bloody incidents in Lice, a district of the Kurdish political and moral action of the province of Diyarbakir, starting on June 1. Lice is well-known for its pro-PKK sympathies — to the extent that the founding congress of the PKK was held at a village of Lice in 1978. Lice's militancy made it a frequent target of oppressive measures by the security forces, especially during the turbulent 1990s.

For the past two weeks there have been demonstrations by Lice residents goaded by the PKK against fortress-like security outposts under construction around the town. AKP circles conveniently labeled the protests as a “provocation” by those aiming to disrupt the peace process. The escalating tension at Lice that led to bloody clashes and for the first time to deaths by fire from security forces after a year and half of respite was not surprising, but its timing was noteworthy. The incidents erupted a few days after imprisoned PKK leader Abdullah Ocalan sent positive signals about the future of the peace process and only a day after three AKP ministers took part in a resolution process workshop in Diyarbakir, where Deputy Prime Minister Besir Atalay on June 6 announced that more important steps were on the way, including announcement of a road map.

Were the bloody events in Lice a provocation? If so, was it the work of alleged PKK hawks who wanted to sabotage the "peace process" or were they a manifestation of the AKP’s dual tactics of displaying an image of pursuing the peace process while also saying that they are not conceding anything to the PKK to secure the nationalist vote before the presidential elections on Aug. 10.

This is the core of the new, impassioned debate in Turkey now.

No doubt the Lice violence has cast dark shadows over what is called the peace process or resolution process. So much so that to salvage what is at stake, the government encouraged Kurdish parliamentarians to head to Imrali Prison Island to talk to Ocalan to calm the tensions. Turkey’s political powers deem it necessary to enlist the assistance of what was once “public enemy No. 1.”

Ever since Prime Minister Recep Tayyip Erdogan disclosed that the “state organs” had begun a dialogue with Ocalan on his prison island of Imrali, a two-hour boat ride off Istanbul, hopes were high that an ultimate resolution of Turkey’s seemingly intractable Kurdish question was possible.

What is meant by “state organs” is Erdogan’s closest confidant, Hakan Fidan, the head of Turkish national intelligence service, MIT. This wasn’t the first time MIT and other state organs were meeting with Kurdish insurgents and personally with Ocalan. But this was the first time such contacts were endorsed and legitimized by a prime minister of Turkey.

Ocalan reciprocated to this unprecedented bold opening by Erdogan in his statement read in Kurdish and Turkish before over a million people assembled to commemorate the Kurdish New Year, Nowruz, on March 21, 2013, which declared the end of armed struggle for the Kurds to achieve their rights. To consolidate the historic move, he called on the armed elements of the PKK to withdraw from the territory of Turkey across the border to Iraq.

In the first week of May 2013, the withdrawal started, accompanied by Turkish journalists. Optimism for the ultimate resolution of the bloody conflict climbed even higher. No body bags of Turkish servicemen were coming back from the southeast of Turkey to stir emotions all over the country. The prime minister was boasting that he had succeeded in stopping the bloodshed and ended the tears of the mothers. That was true.

As time passed, flaws in the process began to emerge. Ostensibly, that was a process with no timetable, no agreed principles — other than the tacit commitment for mutual cessation of hostilities — no mediation and no mutually agreed “third party” to monitor the developments.

It appeared more like a unilateral course of action of the ruling AKP. As long as the cease-fire held and no blood was shed, everything seemed fine. The government and its supporters continued to describe the situation either as the Kurdish matter was already resolved or about to be resolved.

But the clashes in Lice that took the lives of two Kurds, wounded several soldiers and led to escalation of tensions put an end to that state of affairs.

Are we on the eve of a resumption of violence?

Such an observation would be too far-fetched and probably unrealistic, because the Erdogan government and the ruling party have every benefit in keeping the Kurdish situation calm prior to the presidential elections in August 2014 and the parliamentary elections in June 2015. Erdogan needs to secure a certain percentage of the Kurdish vote to get elected as president. He would not like to jeopardize it.

For his part, Ocalan would not like to go back to those old days of total isolation from the outside world, where he had lost all contact with his organization and his followers.

Following the Lice trauma on the “process,” the protagonists cannot act as they have been acting until now. They must be much more forthcoming, much more innovative and even bolder in furthering the process toward resolution and ultimate peace between Turkey and the Kurds, instead of buying time for a calm election period.

After the Lice incident, the time to buy is getting shorter.