The regionalization of the Kurdish problem was the main factor blowing up the peace process in Turkey, and any return to the negotiating table now depends on developments in the Middle East. 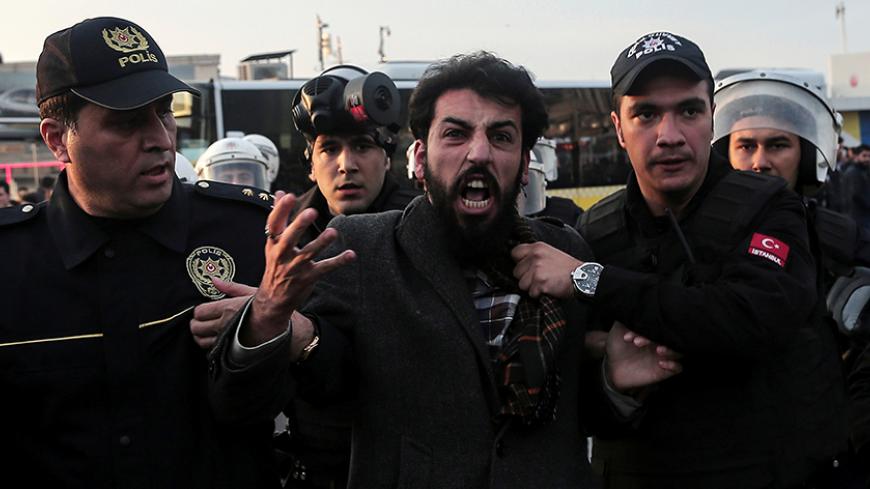 Police officers detain a protester during a protest against the arrest of pro-Kurdish Peoples' Democratic Party lawmakers, in Istanbul, Nov. 6, 2016. - REUTERS/Huseyin Aldemir

The Kurdish issue is undoubtedly Turkey’s most complex problem, both domestically and regionally. The resumption of armed conflict in July 2015 after a two-year lull has claimed thousands of lives and driven hundreds of thousands from their homes.

While violence continues to rattle the country, Ankara’s political and legislative moves have grown more authoritarian by the day. Using the July 15 coup attempt as an opportunity, the government has closed down media outlets and civic groups representing the Kurdish movement and arrested top Kurdish politicians, including parliament members, on the grounds they collaborated with the outlawed Kurdistan Workers Party (PKK).

The security-centered approach has extended to foreign policy as well. Turkey’s determination to contain the Syrian Kurdish Democratic Union Party (PYD) — a PKK extension in Ankara’s eyes — has become so prominent and pressing as to force cross-border military interventions.

All this is a far cry from how the Justice and Development Party (AKP) had started out. President Recep Tayyip Erdogan, who led the party to power in November 2002, was in fact the first Turkish politician who seriously tried to resolve the Kurdish issue through reforms and other political means.

Erdogan’s first two years in power were relatively easy in the Kurdish context. PKK leader Abdullah Ocalan had been captured in 1999, and his militants had silenced their guns. In 2004, however, the PKK made a comeback and the clashes resumed.

Erdogan, then prime minister, was quick to react, launching efforts to reach out to the Kurds. “Ignoring the mistakes of the past does not befit great states. The state knows how to apologize. First-class citizenship for everyone and the full dominance of freedom in our country … is the passion, yearning and dream of myself and my colleagues,” Erdogan said at a meeting with a civic delegation, including this writer, on Aug. 11, 2005. The following day, he repeated the same message before a big crowd in Diyarbakir, the largest city of the mainly Kurdish southeast, marking the outset of what was to become known as “the Kurdish opening.”

Things thereafter moved on two intertwining paths: reform and dialogue on one hand, and an up-and-down of clashes on the other. Beginning from 2006, the AKP advanced a general package of democratization, including the inauguration of Kurdish-language television broadcasts and elective Kurdish-language courses in public schools. This was coupled with a drive to boost public services and investments in the southeast.

When those efforts failed to end the violence, the AKP opened the door to dialogue. From 2008 to 2011, state representatives held secret meetings with senior PKK members, but this process, known as the Oslo talks, also collapsed, giving way to 18 months of bloody clashes with an intolerable toll. In 2013, the AKP finally crossed the critical threshold and launched “the peace process.”

For the first time, contacts between the state and the PKK became official, starting with an announcement of meetings between Ocalan and intelligence officials at the prison island of Imrali, where the PKK leader is serving a life sentence. Then, on March 21, 2013, a message by Ocalan was read out to a huge crowd in Diyarbakir. Ocalan proclaimed the Kurds were closing the era of armed struggle in favor of a political process, and urged PKK guerrillas to pull out from Turkey to longtime bases in neighboring Iraq.

Then-Justice Minister Sadullah Ergin had described the peace process as a three-stage endeavor: the withdrawal of PKK forces, democratization and integration. Ankara formed a civic delegation of 63 “wise men,” including this writer, to promote the peace effort across Turkey. In May 2013, PKK forces began to pull out of Turkey.

A year and a half later, the peace train was still on track despite myriad crises. This was clearly evidenced in the June 2014 remarks of Besir Atalay, then-deputy prime minister in charge of the peace process: “The messages from Imrali overlap with our thoughts,” Atalay said. “We are close to a settlement. We are now working on a new road map to give a fresh impetus to the process.”

So, how did the peace process end in tatters? Two main reasons can explain the failure.

First, the two sides differed in their paradigms and political wills, attributing widely divergent meanings and expectations to the process. The AKP hoped democratization would end the Kurdish problem and expected the PKK to lay down arms in return for broader room for the expression of Kurdish identity. For the Kurdish side, the first objective was recognition as an interlocutor on behalf of the Kurds and then political autonomy, the right to education in Kurdish and amnesty for Ocalan.

The diverging expectations led to tensions and mistrust from the very start. The PKK dragged its feet on the pullout, while Ankara fortified militarily the areas the militants had left and ignored key Kurdish demands such as a revised definition of citizenship and local administration reform. In turn, the PKK halted the pullout at the first opportunity, slowed down the process and returned to tactics of threat.

The AKP, meanwhile, began to feel the political cost of the process, growing apprehensive of its own effort at peace. Ultimately, when it lost its parliamentary majority in the June 2015 elections, it attributed the setback to the peace process and its reluctance grew.

The second and essential reason for the failure stemmed from the shifts in the Middle East, which caused the mix of apprehension, mistrust and diverging expectations to explode. The Syrian civil war paved the way for the emergence of a Kurdish political realm along the Turkish border in northern Syria, an area closely bonded with Turkey’s Kurds socially and with the PKK politically.

This nurtured further Kurdish expectations and bore on the strategy of the Kurdish movement as it saw an opportunity to establish itself in northern Syria. In time, the Kurds became the local partner of the international coalition against the Islamic State, grasping also an opportunity to win legitimacy. As a result, the establishment of a Kurdish corridor along the Turkish border became equally if not more important strategically for the Kurds than the Kurdish problem in Turkey.

So, by July 2015, the Kurdish issue had a second epicenter for Ankara — northern Syria. The PKK saw southeast Turkey and northern Syria as a whole, and its strategy in Turkey changed accordingly with evolving Kurdish demands, ambitions and aspirations, including armed declarations of self-rule.

All those developments and aspirations projected one thing to the Turkish side: anxiety and fear of partition. In a closed briefing in May 2015, the then-undersecretary of the Turkish Foreign Ministry told a group of journalists, including this writer, that the Kurdish issue had gained a foreign policy weight both in terms of definition and settlement, that the PKK had become part of hostile alliances and was being used against Turkey, and thus the leverage of domestic politics and the settlement process had weakened.

So, these are some of the codes of Turkey’s current Kurdish policy at home and in the region. And what about the future?

Turkey today has unequivocally closed the peace chapter, losing its strongest driving force for democratization. The authoritarian policies employed on the Kurdish issue are delivering further blows to democracy. Domestic dynamics alone are unlikely to secure a return to the political path of solution in the current circumstances. Turkey’s Kurdish problem is now a regional one, and its solution depends on regional balances. As many other problems, the Kurdish problem too, are awaiting US President-elect Donald Trump to assume office.