Erdogan’s Many Positions On the Kurdish Issue 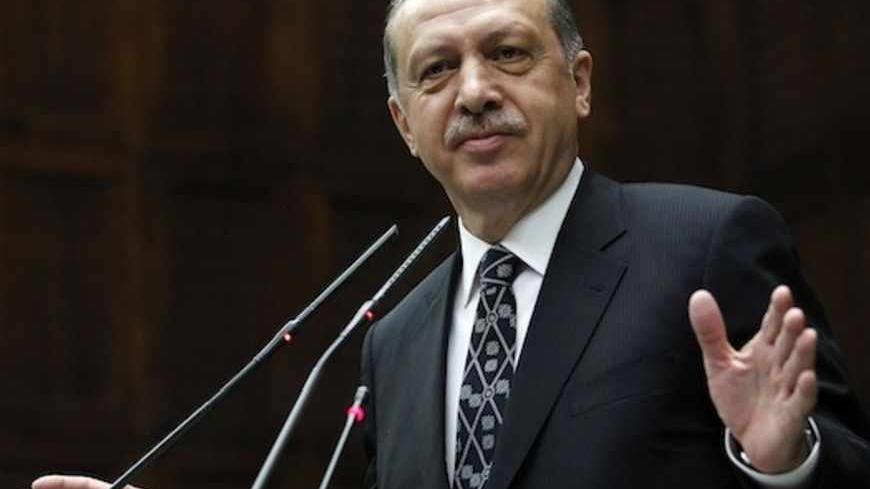 Turkey's Prime Minister Recep Tayyip Erdogan addresses members of parliament from his party during a meeting at the Turkish parliament in Ankara, April 16, 2013. - REUTERS/Umit Bektas

There's been much debate in Turkey and abroad as to whether Turkish Prime Minister Recep Tayyip Erdogan has the right policies to end the Kurdish armed movement. Erdogan's statements tackling the issue provide the best indicators available to assess whether he has a clear mind in addressing it, and whether the process is as transparent as claimed.

Let’s begin with the terminology. For Kurdish nationalists, the "Kurdish issue" means only the Kurdish right to self-determination. When Erdogan went to Diyarbakir, the hotbed of Kurdish nationalism, in August 2005 and said publicly that Turkey has a "Kurdish issue," it marked a historic turning point for Turkey. But in April 2011, Erdogan said, "There is no Kurdish issue in this country. I don't accept it. My Kurdish brother may have problems, but there is no longer a Kurdish issue." People wondered how the Kurdish issue had been resolved — or why the prime minister shifted his position on this very sensitive topic. Soon after, in June 2011, Erdogan visited Diyarbakir again and said, "Whatever I said here in Diyarbakir in 2005, I'm standing behind the same statement. There is a Kurdish issue in this country." Erdogan continues to fail to have coherent terminology, and one wonders whether his vacillations reflect a tactic developed to confuse people, or simply an act to appeal to different constituencies and win votes.

The Erdogan government took two bold steps in 2008 and 2009. They first decided to start secret talks with the Kurdistan Workers Party (PKK) in Oslo, held under the supervision of the British government, and they declared a new policy entitled "democratic opening," which allowed a number of PKK members from Northern Iraq to enter Turkey and be cleared of legal ramifications in tent courts erected at the Habur border gate. This initiative quickly collapsed. The public became aware of the Oslo talks only after the June 2011 elections, when an audio recording of one of the meetings was leaked to the public.

According to the leaked voice recording, Hakan Fidan, who attended the meetings as prime minister's special envoy, and today is the head of National Intelligence Organization (MIT), had extended a Turkish government representative's recognition to the PKK for the first time as the representative of the Kurdish people. That marked yet another historic turning point, since the state had previously argued tirelessly that the PKK had no role in representing Turkey's Kurds.

While these talks in Oslo were under way, Erdogan said in December 2009, "The terrorist organization [PKK] has never been and will never be the representative of my Kurdish origin people." His deputy Bulent Arinc said that same month, "In such a crucial process, it's out of question for us to talk to the PKK or their leader in Imrali. We won't take them into account either in our thinking or in our next steps."

Deniz Baykal, former leader of the main opposition party, the Republican People's Party (CHP), said that same month, "Who is talking to who in this opening process? Neither CHP, nor [the Nationalist Movement Party] has any clue. What kind of an opening is this? It now became clear that the [ruling Justice and Development Party] is actually in talks with the PKK."

Erdogan continued along the same lines in June 2010, when he said, "The terror organization has never become the spokesman of my Kurdish origin people, and will never be. We did not start this democratic opening process for the terror organization. ... If we end this process, terror wins; the warlords win. The vampires who feed themselves with the youth's blood win."

In July 2011, just a day after a PKK attack in Diyarbakir killed 13 Turkish soldiers, Erdogan said, "First of all, the terror organization needs to put down arms. As long as they do not neither this process can advance, nor the military operations will end. ... They need to know that my Kurdish origin citizens are not a minority. Since we came to power, we accomplished three things: We ended rejectionist policies; ended assimilation, and the view that there is no Kurdish issue in this country. We have a PKK problem in this country. ... We won't allow anyone to do a surgical operation in this country." This implied that the PKK or other foreign powers still want to chop off land from the country, and that Erdogan won't allow it to happen.

Selahattin Demirtas, the co-chairman of the pro-Kurdish Peace and Democracy Party (BDP), responded in July 2011: "[PKK leader Abdullah] Ocalan is the most important actor in the Kurdish issue. It's a well-known fact that he has clear control over the PKK. The government is also in talks with him because of this. ... There is no one who wants to do a surgical operation in the country. We do not find the Prime Minister's attitude right, as if he is trying to save the country from those who are trying to divide it. This country is for all of us."

Meanwhile, Erdogan still refuses to shake hands with Demirtas; he considers BDP the political wing of the PKK. When nine members of this Kurdish party were stopped by the PKK on the road in Semdinli last September, their friendly and embracing pictures created a furor. “How am I going to talk to a co-chairman [Demirtas] who hugs and kisses terrorists?” exclaimed Erdogan at the time. “What will the mothers of our martyrs will say when they see their prime minister sitting at the same table with these people? Please allow me to say this: it’s not worth to sit with them risking the tears of the martyrs' mothers.”

In the midst of these developments, a state prosecutor opened a legal inquiry into the secret Oslo talks and invited Fidan to answer some questions. "I'm the one who sent our MIT chief to Imrali and Oslo. Why? Because there is a fight against a terror organization. We have to be successful in this fight. ... It's outright a lie that my MIT chief had given any promises in Oslo, because no record has been kept in writing there. They just verbally discussed matters," Erdogan said in response in April 2012. "The judiciary attempted to cross the line, and wanted to intervene in the business of the executive. ... If they're going to summon Fidan to questioning, that's a summons to me."

In late December, the news broke that the Erdogan government is in direct talks with Ocalan to end the armed Kurdish movement. “We, as politicians, are not and will not be part of these talks [in Imrali],” Erdogan said on Jan. 1. “If we resist to give hand to hand…this is not the way to fight against the separatist terrorist organization. Everyone needs to do whatever falls into their responsibility. We’re now doing our share.”

These are just a few examples of the government's flip-flops in tackling this difficult issue. Efforts are sorely missing to close the gap between public rhetoric and government actions. The government today is doing everything it said it wouldn't do, including directly talking to Ocalan and engaging with the PKK. Once this process successfully concludes, these PKK members won’t just leave Turkey forever. Kurdish analysts argue that they'd likely become more visible in our daily lives. It’s therefore only natural for people to wonder what Erdogan has in mind to conclude these negotiations with the PKK successfully.