Despite their problems with Iraqi Prime Minister Nouri al-Maliki, Saudi leaders consider the Islamic State of Iraq and al-Sham (ISIS) a threat to the kingdom. 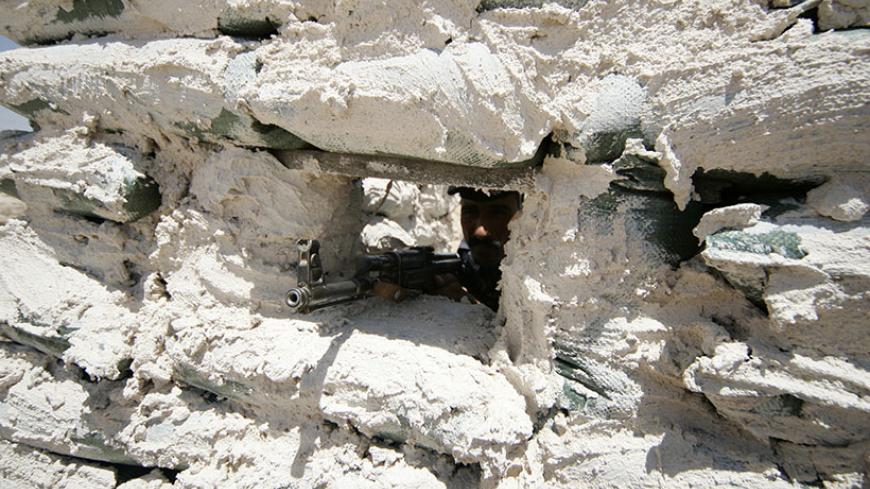 A member of the Iraqi security forces takes position during a patrol looking for militants of the Islamic State of Iraq and al-Sham (ISIS) at the border between Iraq and Saudi Arabia, June 23, 2014. - REUTERS/Mushtaq Muhammed
Fahad Nazer
@@fanazer
June 25, 2014

Contrary to an emerging consensus in the West and the Middle East, the turmoil in Iraq does not benefit Saudi Arabia, nor is it a “dream” for Saudi King Abdullah bin Abdulaziz. While relations between the Saudi royals and Iraqi Prime Minister Nouri al-Maliki are among the most strained in the region, it is one thing for the Saudis to view Maliki as a divisive figure beholden to Iran, and something patently different for them to be actively supporting the armed Sunni rebellion, which al-Qaeda offshoot the Islamic State of Iraq and al-Sham (ISIS) is spearheading.

The prospect of a failed state torn apart by a sectarian civil war along its border, another one in Syria and an al-Qaeda “state” rising up from the ashes of these two civil wars must be a disconcerting one for Saudi Arabia. While both Iraq and Syria have publicly blamed the carnage in their countries on the Saudis for what they maintain is Saudi support of “terrorists,” including ISIS, the al-Qaeda affiliate itself has vowed to “conquer” Saudi Arabia after it has “vanquished” the regimes in Damascus and Baghdad. More than any of its neighbors, Saudi Arabia has the most to lose from the conflict in Iraq spiraling out of control. There are several reasons.

Saudi Arabia values stability more than anything. Its penchant for reactionary politics is most apparent in its unconditional support of President Abdel Fattah al-Sisi’s new government in Egypt, which has reinstituted many of the policies of former President Hosni Mubarak, arguably the Saudis’ most stalwart ally for over 30 years. And while the Saudis have supported the rebels’ bid in Syria to topple President Bashar al-Assad’s regime, this willingness to change the status quo is a function of the role Iran is playing in the conflict and because Saudi Arabia views itself as the leader of the Sunni Muslim world, and therefore has a moral obligation to help the beleaguered Sunni majority.

But even in Syria, there are reports indicating that the Saudis are re-evaluating their policy. The exodus of hundreds of young Saudis to join the “jihad” there has rung alarm bells and brought back memories of the Afghanistan war in the 1980s, when Saudis joined the “Afghan Arab” fighters and either returned home, bringing their military experience with them, or joined other militant Islamist groups elsewhere. Osama bin Laden himself was such an example. Saudis who turned themselves in to authorities after fighting in Syria confirmed that not only are many Saudis — possibly hundreds — gravitating toward the most extreme armed groups in Syria, including ISIS, but that many have become known for their ferociousness and willingness to conduct suicide attacks.

While the overrepresentation of Saudi youths in foreign conflicts with religious or sectarian undertones is a problem that Saudi authorities have to solve by taking measures to curb extremist rhetoric in schools, religious institutions and even the media, it should not be interpreted as official “Saudi support.” The same holds true for financial support from wealthy, individual donors to various militant groups. It’s worth noting that the US Treasury Department recently singled out Kuwait — not Saudi Arabia — for not having the adequate legal infrastructure to prevent individual donors from sending money to militant groups in Syria. While the Saudis have made no apology about supporting the Sunni rebels in Syria, there is no indication that they have supported ISIS there in the past or that they are supporting it now in Iraq.

Al-Qaeda carried out multiple terrorist attacks inside Saudi Arabia between 2003 and 2006, and has attempted many more. Moreover, al-Qaeda’s leaders have a personal animosity toward Saudi royals, especially Interior Minister Mohammed bin Nayef, who is credited with cracking down on the terrorist group and forcing it to move its base of operations to Yemen. In 2009, al-Qaeda’s chief bomb maker sent his brother on what was ultimately a failed suicide mission to assassinate the prince.

Over the past months, ISIS has released videos showing its Saudi fighters not only tearing up their passports, but also vowing to liberate the “Land of the Two Holy Mosques” once their mission in Syria has been accomplished. Over the past two days, ISIS supporters in Iraq created a hashtag on Twitter under the title “The Islamic State Is on the Saudi Borders.”

However, it is not only al-Qaeda’s rise that should concern Saudi Arabia. The Maliki government’s repeated accusations against the Saudis led some Iraqi Shiite militias to vow to bring the violence across Saudi borders. In addition to a newly formed militia whose elaborate name includes the phrase “for the Liberation of Hejaz and Najd,” a firebrand militia leader not only declared Al Saud to be “infidels” — a charge that al-Qaeda has also leveled against the Saudis — but also claimed responsibility for a mortar attack across the Saudi border in November 2013.

While neither Assad nor Maliki is in a position to threaten Saudi Arabia militarily, the Saudis did conduct the most extensive military exercises in the country’s history in May across three theaters, including along its borders with both Yemen and Iraq. And while widely interpreted as a message to its rivals in the region about its military preparedness, it is clear that the Saudis are leery of the growing perception that they are ISIS’s biggest supporters.

In a somewhat unusual move, the Saudi Embassy in the United Kingdom released a statement last week expressing its wish to see the “defeat and destruction” of al-Qaeda networks, singling out ISIS. The head of that embassy, Prince Mohammed bin Nawaf, penned an opinion piece about Iraq the same week and advised against all foreign “intervention.”

Interestingly enough, he ended his piece by writing, “We are asked what can be done. At the moment we wait, we watch and we pray.” Barring any evidence that Saudi Arabia is actively supporting one side in the conflict — especially ISIS — we might have to take him at his word.