The kingdom is distinguishing between Sunni tribes opposed to Iraqi Prime Minister Nouri al-Maliki, and terrorist groups such as the Islamic State of Iraq and al-Sham (ISIS). 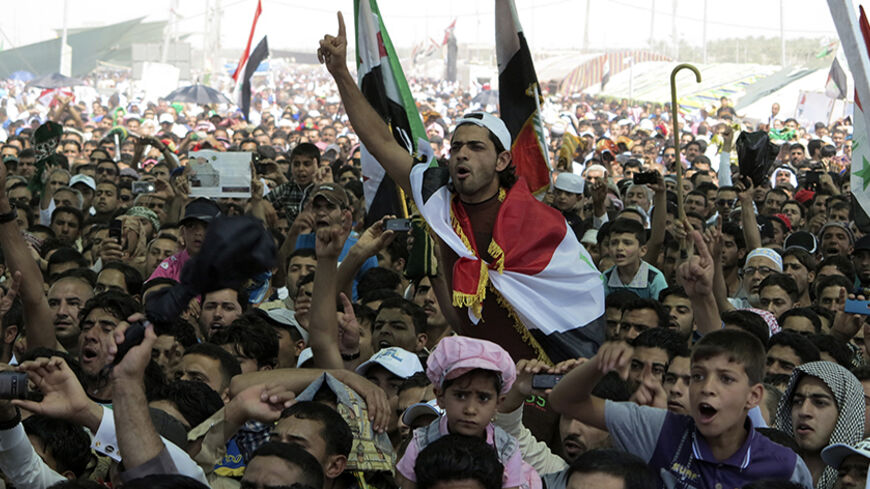 The latest developments in Iraq — the collapse of the Iraqi army in Mosul and the advance of local Sunni factions and the Islamic State of Iraq and al-Sham (ISIS) toward Baghdad — constitute a new challenge for Saudi foreign policy.

While Riyadh would prefer not to have to deal with a sectarian, pro-Iranian government in Baghdad, it is also wary of a jihadist organizations on its northern border.

Thus, the Saudi Council of Ministers issued a statement on June 16 in which it sought to distinguish between factions classified as terrorist, such as ISIS, and Iraqi Sunni clans resisting Iranian influence in Iraq.

The statement, which blamed Iraqi Prime Minister Nouri al-Maliki’s sectarian policies for the situation in Iraq, angered Maliki, who accused Riyadh of being behind the events. The verbal exchange resulted in a quick response from Washington that labeled Maliki’s statements hostile and inaccurate.

Members of Saudi Arabia's ruling circle had feared that the situation in Iraq would slide toward chaos and a devastating civil war if Maliki were re-elected prime minister, which he is close to doing after his party won the largest share of seats in the April 30 parliamentary elections.

Prince Turki al-Faisal, a former head of Saudi intelligence, suggested such a scenario in April along with the possibility of territorial division. On June 13, commenting on current developments, Turki mentioned the possibility of US military intervention to help Maliki’s government thwart the advance of Sunni rebels toward Baghdad, noting how ironic it would be if the Iranian Revolutionary Guard Corps and Americans (using drones) fought in coordination against Iraqis.

The Saudis have long been skeptical of US policy toward Iraq out of concern that it would further bolster Iran’s influence in the country. The Americans continually tried to convince the Saudis that their doubts were unfounded. In January 2007, US officials reportedly told the Saudis that Iraq would be an effective bulwark against Iranian influence, which has clearly not come to pass.

Riyadh has found the policy choices available to it on Iraq and Syria more complicated and difficult in light of the geographical divisions between Sunni and Shiite armed groups. Each group controls areas that offer safe havens for its fighters and territory from which to launch attacks, including against Saudi Arabia. The Shiite militias in Iraq close to Iran constitute such a danger as does ISIS.

Given the lack of regional support for the relatively weak Sunni tribal forces, the radical Shiite groups close to Iran and ISIS have emerged as the two strongest actors. Victory by either of these groups would deeply affect Saudi Arabia. Thus, Saudi neutrality means waiting for the worst to happen, so it is not an option. On the other hand, supporting Maliki’s government is out of the question, as is supporting ISIS, which represents a direct threat to Saudi security.

Despite Maliki’s accusations of Saudi support for ISIS, such a scenario is almost impossible. In fact, in March, David Cohen, US undersecretary of the Treasury for terrorism and financial intelligence, praised Saudi Arabia's cooperation in stanching financing for al-Qaeda. That some ISIS members are Saudi nationals is not proof that Saudi Arabia is supporting the group, and to the contrary might actually aid ISIS’s ability to threaten Saudi security.

The only available option for Saudi Arabia appears to be to support tribal forces in Iraq to promote their capacities and influence in the conflict currently raging. This could later lead to revamping Iraq’s political process in a manner that allows Sunnis to renew their faith in it, which would diminish Iranian influence (though not eliminate it) on the one hand and contain ISIS on the other.

This path would be helped by Saudi Arabia's good relations with tribal leaders in Iraq who share the Saudi regime's tribal concepts and values, especially in Anbar and Mosul. Among the most prominent of these tribes are the al-Shammar, al-Anza and Dalim, all of whom have members in Saudi Arabia and Iraq. Abdullah al-Yawar, secretary-general of the Iraqi Justice and Reform Movement and a prominent elder among the Shammar, visited Riyadh in March. Saudi policy in Iraq and Syria is largely characterized by such tribal links.The first Iraqi president during the US occupation, Ghazi al-Yawar, for example, was a tribal leader close to Saudi Arabia, as is Ahmad al-Jarba, the current president of the Syrian National Coalition. The ability of these figures to face down the rise of jihadist forces is doubtful, however, without significant support.

The most catastrophic scenario from the Saudis' perspective is the actual partitioning of Iraq into a south dominated by Iranian-controlled militias and a west and north dominated by jihadist organizations headed by ISIS. In other words, Riyadh does not want an Iraq in which its Sunni and Shiite radical adversaries each control portions of Iraq’s border with Saudi Arabia.

In the face of such an eventuality, Saudi Arabia would lack adequate room to maneuver. To prevent an Iranian or ISIS presence to the north, the preferred scenario is for Sunni clans, not ISIS, to take over the rebellion in Iraq and become the dominant military force on the ground. The hope would be that these tribes are able to push for the establishment of a new national government that safeguards Iraqi unity.

In the meantime, Washington may be trying to convince the Saudis that it is pressuring Maliki into relinquishing the premiership and working toward forming a new government that espouses moderate policies accommodating to Sunni Arabs. Given Washington’s previous failed assurances to contain Iranian influence in Iraq, Riyadh will no doubt think twice before trusting it again on Iraq.