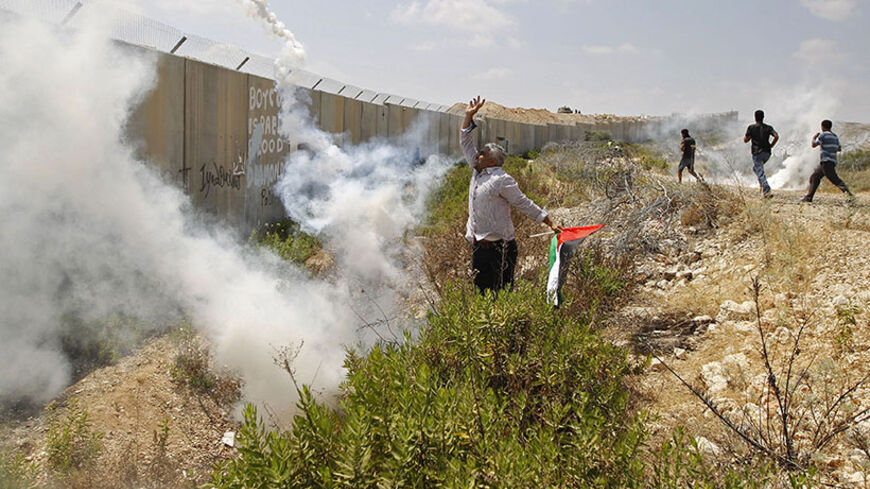 A Palestinian protester near Ramallah returns a tear gas canister fired by Israeli troops during a protest in solidarity with hunger-striking Palestinian prisoners held by Israel, June 13, 2014. - REUTERS/Mohamad Torokman

It’s been almost two months since a group of Palestinian administrative detainees went on a hunger strike April 24. A significant number of the hunger strikers have been behind bars for years without being told what they're accused of and without being put on trial. A hunger strike is a drastic step, but is considered a legitimate nonviolent tool in most of the Western world. None of the Israeli authorities have signaled any willingness to negotiate with the strikers or even to offer a conciliatory gesture to restore calm, as they have done in such instances in the past.

The debate became narrowly focused on practical, operative aspects: on the one hand, Shin Bet is pushing to speed up legislation that would allow force-feeding to prevent hunger strikers’ deaths — which could ignite a third intifada. On the other hand, the military objects to force-feeding and claims it can contain "local insurrections" that would result from a detainee's death.

It would appear to be more than a coincidence that the unusual kidnapping of the three teens June 12 occurred at the height of the hunger strike, and in the Hebron area; some 90 of the 120 striking prisoners are residents of Hebron and its environs. Many Palestinians term the current strike the "strike of the Hebronites." Not only that, two of the kidnapped boys, Naftali Frankel and Gilad Shaar, are students at the Mekor Haim rabbinical college located in the nearby settlement of Kfar Etzion, the first community to be established in the West Bank after the Six-Day War. The leader of HaBayit HaYehudi Party, Naftali Bennett, recently declared that he was determined to advance a plan to impose Israeli sovereignty over this region.

Along with the decision to speed up the legislative process of the force-feeding bill and Bennett’s annexation declaration, Knesset members from the right tabled a proposed law that would ban the release of prisoners as part of any deal with the Palestinian side, or as a goodwill gesture. All these initiatives play into the hands of radical elements in the territories, who object to the Palestinian Authority’s (PA) policy of nonviolence. Israel’s parliament is teaching the Palestinian public that Fatah’s policy of restraint and dialogue does not advance its release from occupation nor even the freedom of detainees who were never convicted. On the other hand, Hamas terror attacks brought about an end to Israel’s occupation of the Gaza Strip and the (2006) kidnapping of (soldier) Gilad Shalit brought home hundreds of murderers who were condemned for life sentences.

On June 12, several hours before the kidnapping of the three Israeli teens, most of the shops and places of business in East Jerusalem shut their doors. A Palestinian journalist told me that he could not remember such an extensive strike in the city since the end of the first intifada (some 20 years ago). For some reason, the Israeli media ignored the unusual event. The next day, police forces clashed with young Palestinians leaving the al-Aqsa Mosque after Friday prayers. According to Palestinian media reports, 28 people were injured and eight were arrested. On the afternoon of the same day, the official site of the Hamas movement, operating out of Gaza, called for the launch of a third intifada in the West Bank.

The announcement by Prime Minister Benjamin Netanyahu that ''Israel holds the Palestinian Authority responsible for the well-being of the missing'' also played right into Hamas' hands. Holding the PA responsible for the safety of Israelis in areas from which its people are banned portrays the authority as Israel’s punching bag. Netanyahu is not satisfied with the fact that in recent years Palestinian policemen have handed back dozens of Israeli citizens who entered (the Palestinian controlled) Area A by mistake — he demands that the Palestinians defend the settlers who are viewed by international law as transgressors who violate the rights of local residents.

The incitement against the authority, just like the harm done to the Palestinians living under Israeli control, exposes the weakness of Palestinian President Mahmoud Abbas and of the shrunken Palestinian peace camp. Placing blame on Abbas is another manifestation of the phenomenon which Ephraim Sneh defined in an interview with Mazal Mualem as “propaganda” and “brainwashing” a la Joseph Goebbels, the Nazi propaganda chief who argued that “if you tell a lie often enough and keep repeating it, people will come to believe it.”

Before denigrating Abbas, Netanyahu should examine his own backyard. It’s hard to count the hundreds of cases in which skilled Israeli security forces failed to pass the very bar that Netanyahu is placing before the PA’s security forces. The US State Department counted 399 hate crimes carried out by Israeli citizens in 2013. The vast majority of these crimes were not solved. The Israeli government and its security forces never took responsibility for settler shootings toward Palestinians, arson at mosques, uprooting of olive trees and incursion into private Palestinian lands. These are always “unusual acts” carried out by “stray weeds.”

Of course none of this justifies the kidnapping of unarmed youths. Unlike a hunger strike and other nonviolent means, this is a severe act of terrorism. The eruption of joy and distribution of candy in Palestinian communities to celebrate the “act of heroism” is stupid.

The kidnappers from the Etzion settlement bloc, just like the unarmed Palestinian youth from Bitunya who was killed by live Israeli ammunition May 15, are the victims of helpless leaders. It's to be hoped that the hostages return home safely and in good health. To prevent the next kidnapping and to stop the deterioration toward the next intifada, Israel must act responsibly and overcome the urges of incitement and revenge. This is the time to re-examine the policy of lengthy detention without trial, and to remove from the Knesset agenda proposed legislation designed to quell popular resistance — which encourages violent insurrection.

All these are necessary steps, but in no way are they sufficient. Only a peace agreement based on a solution of two free states can avert the next tragedies.