The moderate reaction of Defense Minister Moshe Ya'alon, espousing Prime Minister Benjamin Netanyahu's cautious move, might signal Israel’s reluctance to embark on a large-scale military operation in Gaza, following the discovery of the bodies of the three kidnapped youths. 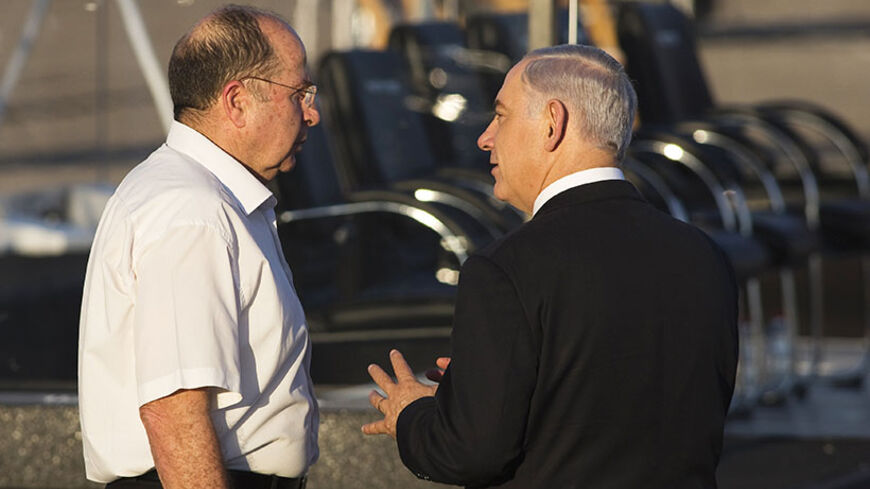 On the night of June 30, after the discovery of the bodies of the three Israeli teenagers who were kidnapped and murdered, allegedly by Hamas, near Hebron, the Israeli air force struck 34 Hamas-affiliated targets in the Gaza Strip. Heavy plumes of dust shot up in the air and deafening noises were heard all around. But once the dust settled and the noise subsided, it turned out that the strikes were aimed primarily at what is referred to in military jargon as “real-estate targets.” The IAF attacked launching positions, unmanned outposts, ammunition depots and rocket production facilities.

The commotion only intensified Israeli frustration over the very limited “tools” available to the leadership in the wake of such a terrorist act. If Benjamin Netanyahu had been the chairman of the opposition right now and not the prime minister, he would have raised hell. He would have raised a belligerent hue and cry, clamoring for an immediate invasion of Gaza and the eradication of Hamas and its rule. He would have demanded to stamp out the terrorist cells to bring peace and quiet to Israel.

How do I know this? I know this because on the eve of Operation Cast Lead at the end of 2008, Netanyahu was chairman of the opposition and Ehud Olmert was the prime minister. Israel’s southern border communities came under heavy rocket barrages from Hamas in the Gaza Strip. Showing up in the city of Ashkelon and looking toward Gaza in the south, Netanyahu declared that when he rose to power he would neither blink nor hesitate. He would go into Gaza, topple Hamas and put an end to that story.

Well, a few months later Netanyahu became the prime minister. Today, Israel’s political right misses Olmert, who at least tried going into Gaza to do something there. And what about Netanyahu? He did not dare do even that.

Almost three weeks ago, on the night of June 12, between Thursday and Friday, three high school students — Gil-Ad Shaer, Naftali Frenkel and Eyal Yifrach — were captured, allegedly by two militants from Hamas’ military wing. One of the teens still managed to make a call to the police emergency number and whisper to the dispatcher on duty: “We’ve been kidnapped.” Failing to give the phone call the appropriate priority it deserved, the dispatchers misjudged the event. (Two days ago, the Israeli police commissioner impeached two senior officers in light of the conclusions of a fact-finding committee that investigated the failure.) As a result, the alleged kidnappers — Marwan Qawasmeh and Amar Abu Aisha — gained eight hours during which they could operate freely.

The problem, from their end, was that they were unaware of that. Had they known that the police actually did not get the phone call, they might have acted differently. Assuming that the Shin Bet, the police and the Israel Defense Forces (IDF) immediately put into action the abductor’s manhunt procedure, employing all of Israel’s might against them, they panicked and reacted hurriedly. It was believed that they murdered the teens immediately, burying them in one of the nearby ravines, torching the stolen Israeli vehicle in which the murder was committed. Then they took off.

Able to establish their identity, the Shin Bet then arrested a few of their collaborators and tracked down what is believed to have been their route. Investigators arrived at the conclusion that another vehicle was involved and that the teenagers were buried somewhere in the meandering ravine at the bottom of the Palestinian village of Beit Kahil, in Hebron’s northern environs.

Lasting almost three weeks, the search saw thousands of soldiers searching the ravine back and forth, leaving no stone unturned, pumping out water from every well and scouring every terrace. On June 30 in the afternoon, the makeshift grave was unearthed. Instantly, the abduction, which could have turned into a hostage situation that would have included a demand for a massive release of Palestinian terrorists, turned into a simply vile and most heinous murder. Three innocent, unarmed teens, whose only crime was their desire to get a ride home on that Thursday night, were murdered.

A volcano of emotions erupted in Israel while in the territories the Palestinians all scurried into their makeshift shelters. This is how events unfold here in the Middle East. Something that has already gone awry can go awry once again at any given time.

Netanyahu’s diplomatic-security cabinet convened that night and anything that was expected to happen, in fact, did. The two most ultra-right ministers, Economy and Trade Minister Naftali Bennett, chairman of HaBayit HaYehudi Party, and Communication Minister Gilad Erdan from the Likud Party, clamored for a wide-scale military operation against Hamas. Suggesting that the IDF go into Gaza to exact a heavy price, they presented to the security echelons a series of proposals for forceful action.

Everyone was waiting to see what Defense Minister Moshe “Bogie” Ya’alon, who has not earned himself a reputation as a leftist, had to say. But he did exactly what all of Israel’s previous defense ministers (barring Ariel Sharon in 1982) did over the years: He calmed everyone down.

Ya’alon understands full well the realities in which Israel operates. He understands perfectly well that Israel has no up-to-date “target bank” against Hamas in Judea and Samaria. On the other hand, inflicting serious harm to Hamas in Gaza could result in a major conflagration in the region, leading to a barrage of dozens or even hundreds of deadly rockets on Tel Aviv.

This is further compounded by the complex diplomatic situation. Two days after the disappearance of the teenagers, Israel announced that it had conclusive evidence to the effect that Hebron-based Hamas infrastructure militants were behind the abduction. Hamas leadership in Gaza and abroad — Ismail Haniyeh, the prime minister, and Khaled Meshaal, the political bureau chief — denied the allegations but at the same time did not wash their hands of it. If it’s Hamas, that’s excellent, they said in private conversations. But we don’t really think it’s us.

Hamas activists tried to have it both ways; they wanted to have their cake and eat it, too. On the one hand, when Jews are being killed, they’re pleased. After all, this is the organization’s raison d’etre. On the other hand, the timing of the operation, at the most sensitive juncture of establishing the Hamas-Fatah reconciliation government — when Hamas in Gaza is isolated, desperate and has no patron — could have devastating repercussions.

For his part, Netanyahu also tried leveraging the event as much as he could to apply heavy pressure on Palestinian President Mahmoud Abbas to end the reconciliation. Netanyahu’s motive is not entirely clear. After all, he entered the negotiations with the Palestinians about a year ago very reluctantly — as if forced to. The reconciliation between Hamas and Fatah provided him with international justification and a great pretext to freeze the diplomatic talks until further notice. If the reconciliation is indeed annulled, the international community will renew its call for the resumption of the negotiations, thereby renewing the pressure. And yet Bibi (Netanyahu) is pressing on at full throttle.

Abbas’ situation is also complicated. From a political standpoint, never before has he enjoyed as strong a standing in the West Bank as he does now. From a public standpoint, however, he finds himself on the defensive and in a very sensitive situation. His stern and crystal-clear statements in Saudi Arabia — namely, the condemnation of the abduction and the call to bring the three Israeli teenagers home safe and sound — turned him into a silhouette target for Hamas.

In his defense, Abbas says, and rightly so, that terrorism has never gotten the Palestinians anywhere and that his statement averted a much larger Israeli operation in the West Bank. This is backed by facts. Shortly after the three teenagers were kidnapped, there were calls within the Israeli government to dispatch the IDF to also hurt the Palestinian Authority (PA). While Netanyahu was seriously weighing those proposals and debating his options, Abbas came out with that statement. Given his stated opposition to terrorism and its condemnation, it became clear that “framing” him and lumping him and the PA together with the perpetrators would be hard to do.

The most fundamental question is how the parties will emerge from this event. Is it another pinpoint, tactical incident that will be forgotten in a few days or weeks? Will we all revert to business as usual, continuing to monitor the exploits of ISIS in Iraq and the struggle of Egyptian President Abdel Fattah al-Sisi? Or will this be a watershed event that will alter the current reality, bringing about the end of the reconciliation between Fatah and Hamas and perhaps giving rise to new options to the parties? In the Middle East, as is always the case, we will find out only when the time comes.