Would Israel cut a deal with Hamas for kidnapped students?

Contrary to the Gilad Shalit kidnapping, when 1,027 Palestinian prisoners were released, the right-wing community of the current kidnapped might not be ready to cut such a deal or give up land to bring the children home. 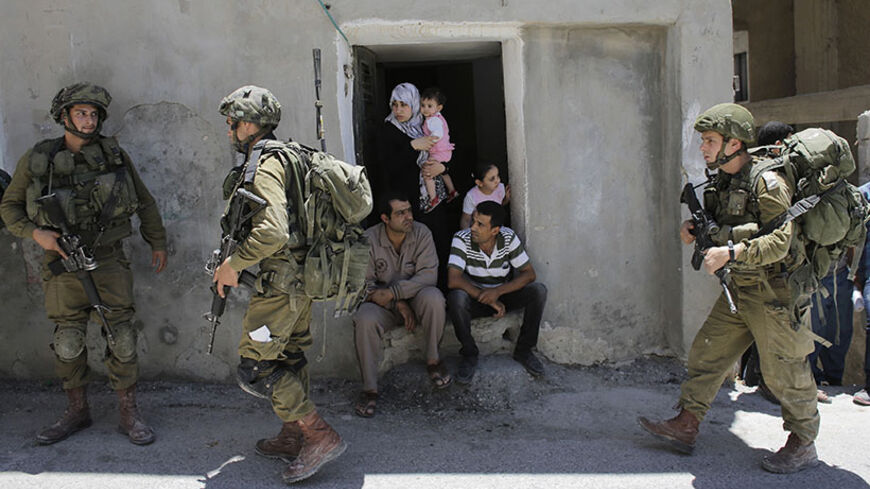 Shimon Peres, the Israeli president who will conclude a seven-year term next month as the most popular politician in Israel, told US President Barack Obama on June 25 that Palestinian President Mahmoud Abbas was the best Palestinian partner Israel has ever had. The following day, Minister of Economy and Trade Naftali Bennett lambasted Peres, calling his statement “delusional” while dubbing the Palestinian president an “archterrorist.”

All the while, chief negotiator of the now defunct negotiations, Justice Minister Tzipi Livni, continues at every turn to lavish praise on Abbas. She even declared that she will continue to meet with him despite a prohibition to do so since the negotiations between the two parties were discontinued.

Avigdor Liberman, the Israeli foreign minister, publicly kept stating that the Palestinian president was not a partner, because peace with the Palestinians could not be made at this time and the only way to break through the deadlock was to start a regional peace process between Israel and the moderate Sunni states.

To all this one may add a rare and surprising statement by Israel’s President-elect Reuven Rivlin, who will take office next month. Known as a right-wing ideologue who opposes a two-state solution, Rivlin declared on June 25 that he would not hesitate to meet with Abbas, noting the need to find ways to break through the stalemate in terms of the relations between the two peoples.

Having declared his commitment to a two-state solution in his Bar-Ilan address five years ago, Prime Minister Benjamin Netanyahu is lodged in between. After resuming the negotiations a year ago, he had them discontinued last month. Netanyahu is torn between his belligerent statements against Abbas on the one hand, and the need to commend him for denouncing terror and acting against it, on the other.

Netanyahu is torn between his knowledge that Israel has no better partner than Abbas — nor will it have a better one — and the pact that Abbas made with Hamas, an organization whose religious ideology calls in no uncertain terms for the destruction of Israel as soon as possible.

Over the weekend, Netanyahu embraced a relatively moderate golden mean. Noting that Abbas’ statements against terrorism in Saudi Arabia were a move in the right direction, he did say, however, that in light of the fact that Hamas kidnapped the three Israeli teens, Israel expects him to stop the reconciliation process immediately and have his unity government disbanded. Doing business with a terrorist organization is not an option, the Israeli premier asserted. Abbas, Netanyahu added, has to choose between Hamas and the diplomatic process with Israel.

The old aphorism by Henry Kissinger, the former US secretary of state, that Israel has no foreign policy, only a domestic one, gets reinforced time and again. Before expressing their opinion on Abbas, Israeli politicians look apprehensively over their shoulder at their potential constituents. With bloodshot eyes, they peek at the polls that are published almost weekly in Israel. Deep inside they know that Abbas, too, is torn from within. He knows full well that not only does Hamas pose a threat to Israel but also to him, flesh and blood, his way of life and the secular Palestinian public that supports him. He also knows that the Palestinian people loathe Israel, are fed up with the occupation, rejoicing whenever an Israeli is murdered, kidnapped or stabbed, regardless of whether the victim is a teenager, a child or an elderly person. This is why Abbas keeps adhering to his fundamental principle: opposing terrorism as a legitimate mode of struggle.

His position notwithstanding, he still continues endorsing the generous allowances the Palestinian Authority pays to security prisoners. Through a Western prism, this might seem logical from a certain angle. The problem, however, is that through an Israeli prism — indeed, through a moral, human or constitutional one — it looks a tad less logical. Among the recipient of these allowances are quite a few prisoners who murdered in cold blood and slaughtered women and children at coffee shops, clubs or shopping malls. And no, it was not because of the occupation. It was because they were Jews.

What will Belgium do if it finds out that Abbas is paying a salary to the terrorist who perpetrated the attack at the Jewish Museum in Brussels? What would France have done if it turned out that the same applied to the terrorist who perpetrated the heinous attack in Toulouse (assuming he would not have been killed by France’s security forces but rather sentenced to life)? What would the United States say if it turned out that Abbas was paying the terrorists behind 9/11?

Furthermore, Fatah — the Palestine Liberation Organization — was founded in 1966, a year before the Israeli occupation and well before there was talk about the territories and the Israeli conquest of the West Bank. When all is said and done, there are all kinds of truths, quite a few perspectives and two dichotomous narratives that are intertwined. What’s left for the bickering parties to do is to look over their shoulder to their constituents, glance at the polls and lie to themselves.

This week I made a visit to Hebron. The Israel Defense Forces (IDF) dispatched thousands of soldiers to the campaign against Hamas and to assist Operation Brother’s Keeper, whose goal is to find the three kidnapped teenagers — dead or alive. Three enlisted brigades were deployed in the area, beefing up the regular military forces, Shin Bet, the Intelligence Directorate, surveillance zeppelins and drones. Israel employs all its intelligence, military and operational capabilities in a relatively small territorial compartment. Yet two weeks after their disappearance, the whereabouts of the three teenagers remain unknown.

There is nothing like the kidnapping of a soldier to send Israel into fierce and frenzied pressure. In descending order of severity, the next phobia is the kidnapping of underage teens. This is the case at hand. Even the big demon hovering over the soul of Jews in Israel — namely, Iran’s nuclear program — does not elicit such reactions. Last time, when the Israeli soldier Gilad Shalit was captured by Hamas and vanished, the whole country marched, rallied, raised hell and conducted a campaign against its leaders until Netanyahu snapped and released the terrorists Hamas demanded.

A few weeks ago, President Obama was scathingly criticized for releasing five terrorists in exchange for the American prisoner of war, whose behavior and the circumstances surrounding his captivity remain seriously controversial. Now think about it: Israel released 1,027 terrorists, hundreds of whom were murderers, in order to bring Shalit home. On top of this, the United States does not face an existential threat, and terrorism does not threaten the day-to-day well-being of some 300 million Americans. Israel, conversely, is still surrounded by large, hostile and unbridled forces seeking to throw its citizens into the ocean. If you don’t buy into this, maybe looking at the events in Syria and Iraq might convince you otherwise.

The present abduction is more complex and riveting than the previous one. Shalit comes from a mainstream Israeli family. In other words, these are people who hold relatively liberal, centrist views, espousing humanistic values without sanctifying holy places too much. They want peace, support the negotiations and have qualms about the consequences of the occupation and controlling another people. This time around, the three kidnapped teens, high-school students at a religious seminary, are the flesh and blood of “religious Zionism.” Over the last two decades, this stream has spearheaded the ultra-nationalist radical political right in Israel.

To put it differently, Shalit was part and parcel of a public that is willing to do anything to bring its boys home. Gilad Shaar, Naftali Frenkel and Eyal Yifrach — the abducted teens — belong to a public that is willing to do anything — and I mean anything — for the Land of Israel. The question remains: What will happen now when three teenagers are pitted against the needs of mother earth? What will the mothers do if and when Hamas demands ransom as well as the release of murderers in exchange for their children?

It remains unclear whether this will be the scenario. The IDF claims that its working premise is that the three teens are alive. However, sources close to the investigation know that as the days go by, the chances for finding them alive are running out.

At this time, the three families, the three mothers, display an impressive and unified ideological front, complaining to the government only when it demonstrates weakness. One of the three mothers even made a blunt attack on the government following its agreement with the security prisoners that are on a hunger strike. According to the ideology of the families of the kidnapped teens, Israel cannot blink and must not negotiate with Hamas, which should not be rewarded for its crimes.

Will this position hold water even if the three boys are alive in Hamas captivity? I would venture to answer in the affirmative. This public of religious Zionism forms a bona fide ideological group that is willing to sacrifice life, even of its loved ones, for the land of Israel. Some see this to be an advantage, while others consider it to be a disadvantage. What is certain is that there is no solution at this time.