The controversial force-feeding law passed in July will soon be tested by the case of hunger-striking Palestinian prisoner Mohammed Allan as the Israel Medical Association stands firm against a practice it considers unethical. 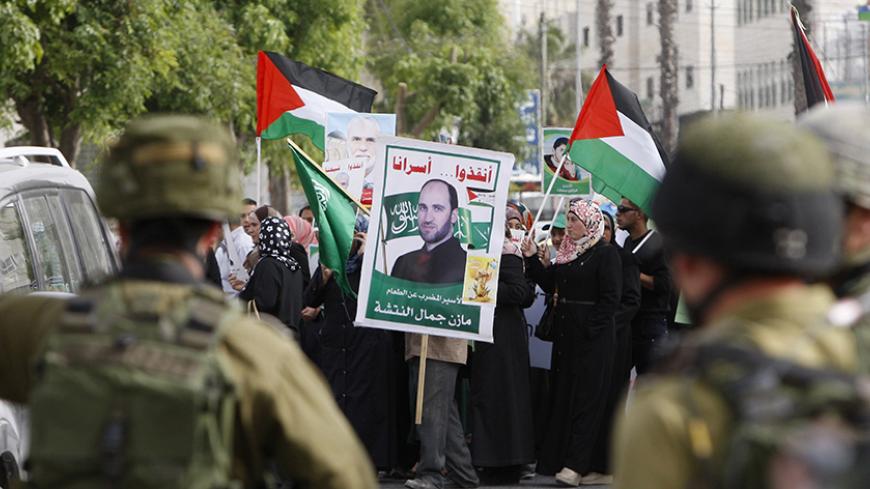 Israeli soldiers stand guard as Palestinians hold national flags and posters of jailed relatives during a protest in solidarity with prisoners on hunger strike, in the West Bank city of Hebron, June 4, 2014. - REUTERS/Mussa Qawasma

Mohammed Allan, the administrative detainee who has been on hunger strike for 57 straight days now, is testing the new force-feeding law passed by the Knesset on July 30 just before breaking for summer recess. Allan was hospitalized in critical condition at Soroka Medical Center in the southern city of Beersheba and on Aug. 10 was transferred to Barzilai Medical Center in the town of Ashkelon. In the three weeks since his transfer to the hospital, he has been under the supervision of senior physicians there. After the Knesset passed the bill, his doctors — under advisement from the Israel Medical Association — decided that they would not be used as political pawns and would not force-feed him. As far as they’re concerned, the Hippocratic Oath overrides the controversial law.

Two days after the Knesset passed the law, Dr. Tamar Karni, chairman of the IMA’s ethics committee, showed up at the Soroka ward in support of its physicians, who are complying with Allan’s wish not to be fed under any circumstances as long as he is conscious and refuses to eat of his own free will. Karni told Al-Monitor that the state has pressured the doctors, expecting them to do its job.

According to her, the new legislation is an attempt to shift the pressure surrounding the sensitive issue of administrative detainees to physicians. “It hurts me that they put us by force on the spot,” she said. “All the other courts — the political, diplomatic and legal ones — are now straddling the line, trying to turn doctors into either collaborators or criminals.”

During her visit to the intensive care unit, Karni tried to persuade Allan to accept palliative care, which by her definition does not compromise his hunger strike. “So far, all the administrative detainees, except Khader Adnan [recently released from prison after 54 days of hunger strike], agreed to accept saline intravenous infusion with vitamin injections to prolong their life,” she said. “Similarly to Adnan, Allan has refused to accept this palliative care.”

Karni noted that Allan thanked her for trying to keep him alive but said that he was willing to take the risk of dying and that he refused to accept being imprisoned without trial. “This is his legitimate and nonviolent way of protesting,” she said, “and we shouldn’t act against his wish — or else it falls under the category of torture.”

Adnan, the famous hunger striker who was released from administrative detention on July 12 following his second hunger strike, told Al-Monitor that the position of the Israeli doctors is humane, moving and worthy of appreciation. “They prove that they are real doctors and don’t serve the authorities or the defense establishment,” he said. Adnan is very familiar with Karni and Dr. Leonid Eidelman, IMA’s chairman, who provided him with care through both of his extended hunger strikes in the past. “They abided by the Hippocratic Oath and granted my wish not to get saline or vitamins. The problem is that there are doctors working for the Israel Prison Authority who can break the oath and feed Allan — or whoever follows in his footsteps — by force. You don’t need many doctors. All you need is one who will do the job for them — and then it will be a crime and torture, and we will need to raise hell around the world until we get to the International Criminal Court in The Hague.”

Will a doctor from the Prison Authority be found who will agree to abide by this law under orders? During a June 22 meeting of the State Comptroller Committee, Public Security Minister Gilad Erdan expressed his confidence that despite the objections of the IMA, Physicians for Human Rights and other human rights organizations, doctors would be found to carry out the law. Erdan told detractors of the bill, “Although the law does not require doctors to perform the procedure, I am sure doctors can be found who will agree to do it.”

The physicians’ position has rendered Erdan's bill all but sterile. Eidelman is convinced that no doctor will be found in the Prison Service to act against the position adopted by the IMA. “Doctors are not supposed to treat patients who are on hunger strike and in a life-threatening condition,” he told Al-Monitor. “According to the explicit directive of the Ministry of Health, after 28 days, when the life of a hunger striker is in danger, he is to be transferred to a hospital. In fact, Prison Service physicians have no access to the hunger striker whose life is in danger. He is transferred to the care of hospital doctors. All the doctors who are treating [these] patients support our position.”

Meanwhile, Karni, on behalf of the IMA, has filed a petition with the Supreme Court, arguing that the force-feeding legislation is flagrantly unlawful. The hearing has been scheduled for mid-September, yet Allan’s hunger strike has made the issue more pressing, which is why she has taken action to move up the court date.

There is no doubt that the law was passed hurriedly on account of the wave of hunger strikes by administrative detainees and the feeling that the Shin Bet and Prison Authority have no way of stopping it, especially after Adnan was able to twist the defense establishment’s arm into releasing him. “This is our great victory to abolish the administrative detentions against our people,” Adnan told Al-Monitor. “It turns out they stand helpless and clueless in the face of our resolve. Inshallah, we will use every way to fight against these illegal arrests.”

Eidelman noted that in his view the doctors’ position has no effect on the administrative detainees' motivation to go on a hunger strike. “In the past I sat down with Adnan and a few other hunger strikers when I came to check on them,” he said. “Whether or not they see us as supporters, the motivation is there because they have an objective, which is to fight their incarceration conditions. That’s their main drive.”

Karni, too, thinks that the issue of what the doctors will do is diverting public attention from the real issue. “We are not going to solve Israel’s security problems. We won’t handcuff the hunger strikers to their beds,” she asserted. “My personal feeling is that the public is baffled. It needs to be clear that if we perform any medical intervention on one particular population, the next day it might apply to everyone. That’s not going to happen. We, the doctors, won’t solve Israel’s security problem. It needs to be clear that we won’t handcuff them to the bed and won’t use force against them. We’re neither soldiers nor cops.”