In an interview with Al-Monitor, former Palestinian hunger striker Samer Issawi condemns the Israeli bill allowing force-feeding of prisoners on hunger strikes, stressing that such strikes, as the one taking place now, are the prisoners' only option to protest illegal detention. 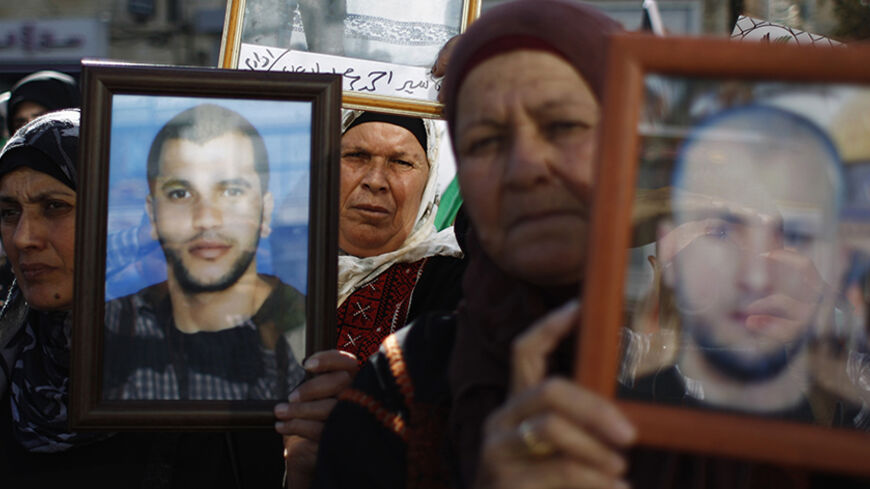 Palestinians hold pictures of prisoners during a demonstration in support of Palestinian prisoners on hunger strike in Israeli jails, in the West Bank city of Ramallah, June 7, 2014. - REUTERS/Mohamad Torokman

The Knesset was in an uproar this week, following the June 9 approval of the first reading of a law that would allow the force-feeding of prisoners on hunger strike. The law is being advanced by the Israeli government, under instructions from Prime Minister Benjamin Netanyahu. At the same time, the hunger strike by a dozen Palestinian prisoners held under administrative detention in Israeli jails is expanding. It now enters its 50th day.

The current strike by administrative detainees began on April 24. A group of 85 prisoners launched a hunger strike with no time limit, until they are either put on trial or released from prison. Over time, their numbers grew, so there are now 240 prisoners participating in the strike. Many have since been hospitalized because of their declining health.

The preface to the proposed law contains a detailed explanation of its timing and lists the motives that brought the Ministry of Justice to introduce the controversial legislation: “Strikes by prisoners are a familiar phenomenon, which repeats itself in Israel today to advance various objectives of the striking prisoners. … In some cases, the situation deteriorates so that their lives are in peril. As it stands, the situation demands the formalization of appropriate and adequate ways of dealing with these hunger strikes.”

The proposed law covers 16 pages, in which the state declares that prisoners lack the autonomy and freedom to make decisions about their person. It goes on to say that a hunger strike is, in effect, a violation of prison discipline. Since the Israel Prison Service is responsible for the well-being of its prisoners and detainees, it is obligated to feed the hunger strikers, once it receives the court’s permission to do so.

Khader Adnan, an Islamic Jihad activist from the village of Arrabe in the Nablus District, and Samer Issawi of East Jerusalem are examples of two administrative detainees who have used their hunger strike to force the Prison Service and the Shin Bet to reach a deal with them leading to their release. But they managed to do so only after their lives were in danger. Adnan was on a total hunger strike for two months, while Issawi, who was previously released in the Gilad Shalit deal, was on strike for eight months, during which he received vitamin enriched liquids, which kept him alive.

Issawi is keeping close tabs on the current hunger strike, which was inspired by his own. In an interview with Al-Monitor, he talks about how he forced the Israeli security establishment to release him and about the widespread support that the current strikers have among prisoners, including those since released, as well as the Palestinian public.

Al-Monitor:  Did you hear about the proposed law to force-feed prisoners on hunger strike?

Issawi:  I heard about it, but the debate isn’t about force-feeding but about the very essence of administrative detention. There has been force-feeding in the past, and it caused the death of prisoners. In the 1980s, two Palestinian prisoners, Ali Jaafari and Ghassam Halawa, who were on hunger strike, were force-fed at Nafha prison and died. Fluids and food penetrated their lungs, causing an infection. The very act of force-feeding is a violation of international law. Going on a hunger strike is a personal decision by the prisoner. It is the only way that prisoners can protest their illegal detention and bring about their release.

Al-Monitor:  I want to ask you about your personal experience. You were on hunger strike for eight months, and received treatment in an Israeli hospital because your life was in danger.

Issawi:  I was on hunger strike for eight months, but I drank water with salt, water with sugar, and glucose, which is why I managed to survive my hunger strike for so long and ultimately win my battle. I was released in the Shalit deal, but I was arrested again and charged with violating the terms of my release. I was about to receive 20 years [to] life sentences. That is what compelled me to strike and to make it a life and death issue. I decided that I would either be released or die a shahid [martyr]. I had no choice and no other option. By doing what I did, I was able to direct international attention to my particular situation, and also focus attention on the general policy of administrative detention as it is being used by Israel. I wasn’t putting anyone in danger, but I wasn’t willing to spend 20 years in jail just because I tried to enter the West Bank.

Al-Monitor:  At the end of your struggle, you actually beat the system. You were released.

Issawi:  Yes, I won. It was a victory that had international reverberations and focused the world’s attention on the fate of the administrative detainees. My struggle even received the support of groups on the Israeli left. Activists would come to the hospital to encourage me. They knew that I was the victim of an injustice and discrimination. Anyone who believes in the freedom of the human spirit will be opposed to actions of this sort. Yes, it was an individual, personal victory, but it was also a humanitarian victory.

Al-Monitor:  Were you surprised by the support of left-wing groups for your struggle?

Issawi:  No, I am familiar with their positive position regarding the Israeli-Palestinian conflict.

Al-Monitor:  Do you think the hunger strike will expand to other prisoners who are not administrative detainees?

Issawi:  Yes, as long as the hunger strike lasts, more prisoners will join it. There has already been a shift in Palestinian public opinion about it. If a single Palestinian prisoner dies as a result of the hunger strike or from force-feeding, it will set the whole territory ablaze. Given the diplomatic tension in the region now, I can tell you with absolute certainty that the death of prisoners in detention has the potential to ignite a third intifada.

In his capacity as legal counsel to the Yesh Din organization, attorney Michael Sfard tells Al-Monitor that the proposed law is certainly problematic. According to him, force-feeding is considered to be a violation of medical ethics according to every international definition. It can even be defined as torture.

“It is an illegitimate procedure,” he explains, “when a person with clear faculties declares that even if his situation deteriorates and he is no longer fit, he should not be fed — he has complete autonomy over his body. That explains the unequivocal position that force-feeding meets the criteria of torture. A large part of the medical ethics surrounding force-feeding today is based on the tragic experiences of prisoners in Ireland, who died as a result of being force-fed. As of now, because of what was learned from the hunger strike in Israeli prisons two years ago, hunger strikers are transferred to hospital. In my opinion, this is far preferable to leaving the prisoners’ medical treatment solely in the hands of Prison Service doctors. Doctors employed by the Prison Service generally have a dual loyalty. It is true that they have a commitment to professional medical ethics, but they all serve in a hierarchical security establishment. In contrast, civilian doctors have just medical objectives.''

Al-Monitor:  Can organizations like Physicians for Human Rights, which you represented during the last hunger strike, do anything to stop the legislation from passing?

Sfard:  I can tell you that a law like the one being proposed is a candidate for a Supreme Court hearing, because it deals with the individual’s autonomy over his own body and with human dignity, especially now that there is an international consensus that force-feeding is torture.

Al-Monitor:  The heads of Israel’s Doctors’ Union, which organizes all the doctors in the country, have already expressed their uneasiness about this. Part of them are even voicing fierce opposition to the legal procedures that would obligate them to do something that runs counter to basic medical ethics. Some are concerned that if they follow the letter of the law in Israel, they could be violating international law and find themselves before the International Criminal Court.

Sfard:  Their situation will be quite serious, because the criminal responsibility that they bear is personal. We are entering the category of torture, so each and every doctor bears personal responsibility. While it is true that ultimately force is being used to save a life, the decision to use force is not taken out of concern for the fate of the hunger striker. It is simply a political tool.

Al-Monitor:  Although the current hunger strike has been receiving little attention in the Israeli media, it has once again raised the issue of the scope of administrative detention in Israel — about 180 nowadays.

Sfard:  Administrative detention is actually a procedure permitted by international law. At the same time, however, it is important to note that international law never foresaw its wholesale use on such a grand scale. It was supposed to be limited to isolated and extraordinary cases involving a tangible risk. Administrative detention is an acute problem, and it is used far too frequently. I don’t know of any other place in the world where administrative arrests take place on the same scale.