With Palestinian prisoners on a hunger strike for the fourth week now, it is highly likely that some prisoners will suffer permanent health damage and possible death. 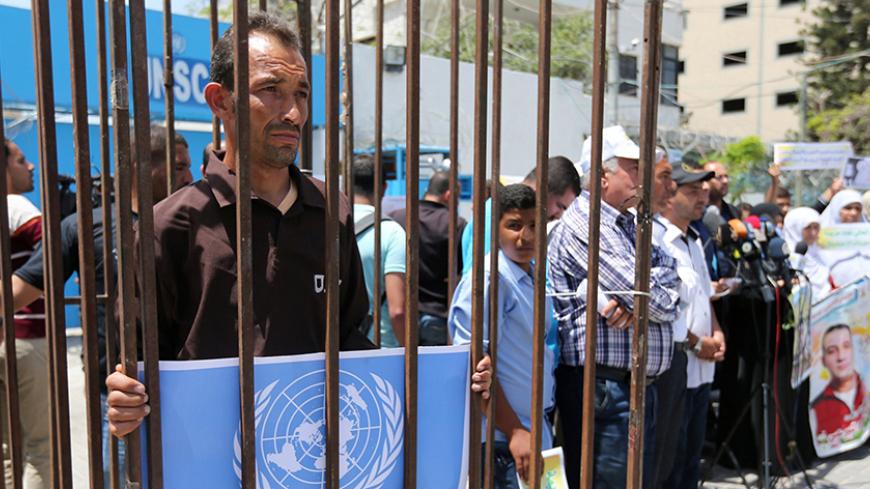 A man plays the role of a prisoner during a protest in support of Palestinian prisoners on a hunger strike in Israeli jails, Gaza City, Gaza, May 9, 2017. - REUTERS/Ibraheem Abu Mustafa

Israeli doctors continue to reject attempts by prison authorities to participate in any force-feeding or forced treatment of Palestinian prisoners who are on a hunger strike.

Ran Goldstein, the Israeli executive director of Physicians for Human Rights Israel (PHRI), told Al-Monitor that Israeli doctors see any force used in medical treatment as unethical. “Our organization and the Israeli Medical Association (IMA) see eye to eye on this issue. Force-feeding or forced treatment are unethical, and Israeli doctors will not participate in them.”

The IMA has, for a number of years, refused to participate in any force-feeding of prisoners. “Forced-feeding is equivalent to torture, and every physician has the right to refuse to force-feed a hunger striker against his or her will,” the IMA states in its guidelines, as per the National Lawyers Guild and reported by Al Jazeera in 2015.

The International Committee of the Red Cross (ICRC) also opposes force-feeding. The ICRC stresses the importance of respecting the choices and preserving the dignity of detainees. The World Medical Association (WMA) adopts a similar position, as expressed in the 2006 revision of the Tokyo and Malta declarations.

PHRI has called on world doctors not to participate in this effort to force-feed Palestinians. A report on their website May 7 said, PHRI calls on the WMA “to instruct doctors around the world not to cooperate with the IPS’s plans to import doctors from abroad to force strikers.”

Goldstein also expressed his worry that if the IPS is unable to bring doctors from abroad and unable to find cooperative doctors at regular Israeli hospitals, they might choose to create a field hospital to be run by Israeli doctors who are not members of the IMA. “We have repeatedly called for the doctors working for the prison authority to be changed since they are not members of the IMA and we demand that they work under the auspices of the Ministry of Health, and not under the internal security prison service.”

Goldstein added there is a serious problem in the way the current doctors function in prison. “There are always long delays in getting treatment, surgery takes years and these doctors don't take seriously complaints of patients,” he said.

Goldstein further explained that most Israeli prisons lack needed medical facilities to deal with a prolonged mass hunger strike. “There is only one clinic in the center of Israel in Ramla, and it takes prisoners many hours to get to it.” Goldstein said that prisoners are transported in rough conditions. “They are shackled in the vehicles they are transported in, which are not appropriate to transfer sick patients,” he said.

The Palestinian prisoner’s hunger strike that began April 17 is entering its crucial fourth week. Attention will focus now on the health of the prisoners, as body organs will start to fail.

Without negotiations with prisoners, it is highly likely that some prisoners will suffer permanent health damage and possible death. The sooner that this issue is dealt with, the sooner the anger that can be caused by such injuries and fatalities can be addressed.