Israeli medical associations claim that the "force-feeding" bill promoted by the government is unethical, but the authorities are still pushing the proposal forward to avoid image-damaging Palestinian prisoner deaths. 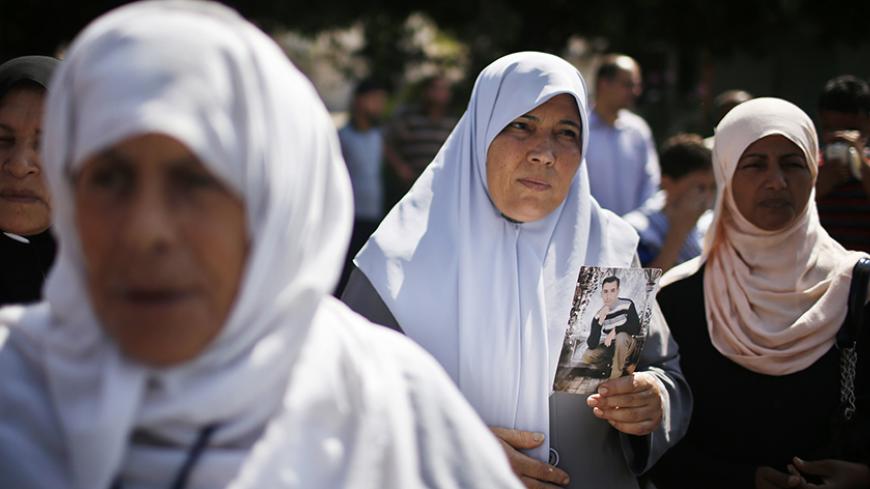 A Palestinian woman holds a picture of a jailed relative during a rally in solidarity with hunger-striking Palestinian prisoners held by Israel, in Gaza City, June 11, 2014. - REUTERS/Mohammed Salem

The panel appointed by the UN Human Rights Council presented its report on the 2014 Gaza war on June 22, harshly criticizing Israel for the killing of more than 1,400 Palestinians, among them hundreds of children. In a strange coincidence, almost simultaneously, there was a stormy session of the Knesset’s Government Oversight Committee about Israel’s efforts to save the lives of several dozen Palestinians. The Knesset debate followed the June 14 announcement by Internal Security Minister Gilad Erdan of his intention to push forward legislation allowing Israel to force-feed hunger-striking Palestinian prisoners or administrative detainees whose lives are in danger.

But the minister and his colleagues, who are determined to adopt the bill, are not necessarily motivated by a genuine concern for the well-being of the Palestinian prisoners or their claims. They seem more worried about the damage that the possible death of the hunger strikers could cause to Israel’s image. The bomb is ticking under their feet. June 23 marked 50 days of the hunger strike by Khader Adnan, a detainee whose life is in imminent danger. Three years ago, Adnan forced the Israeli authorities to free him after a 66-day strike. In July 2014, he was placed under administrative detention, without trial, for the 9th time. Adnan announced that he would stop eating until he is released from jail, put on trial or returns his soul to his maker, whichever comes first.

“We cannot allow anyone to threaten us,” Erdan stated. “We will not allow prisoners to die in our prisons.” He expressed his hope that despite the objections of the Israel Medical Association, Physicians for Human Rights (PHR) and other human rights organizations, doctors would be found to force-feed the prisoners. “Although the law does not require doctors to carry out the procedure,” he said, “I am sure doctors can be found who will agree to do so.”

Erdan may have been referring to doctors employed by the Israel Prison Service, which is under the control of his ministry. But according to Amany Dayif, director of the Prisoner Affairs Department at PHR, hunger-striking prisoners whose lives are in danger are transferred to hospitals. She told Al-Monitor that the Israeli forum of hospital directors has made clear it would not cooperate with orders to force-feed people, neither providing their facilities for such procedures nor carrying them out.

Avinoam Reches, who until recently headed the Ethics Committee of the Israel Medical Association, noted at this week’s Knesset debate that international treaties ban doctors from participating in force-feeding hunger strikers, since force-feeding is considered torture. Bella Kaufman of PHR said at the Knesset debate that the only hunger strikers to ever die in Israel were those who were force-fed.

Reches announced at the debate that if doctors assist such a procedure in any way, they would be tried by the Medical Association tribunal, which he heads. In his view, a hunger strike is a political move and not a medical problem, and “therefore the state cannot kick the ball to the doctors’ court.”

In a conversation with Al-Monitor the next day, Reches said the Israel Medical Association would call on all its members not to cooperate with the law. “The IMA is an independent body and it has to distance itself from this initiative and to do its best to oppose the government’s decision. It’s important for me to stress that the IMA has more than 20,000 members — from the political left and right, secular and religious, Jewish and Arab. Our position is not a political one; it is a humane one that reflects the spirit of the profession.” He added that professional ethics supersedes the laws of the state, noting, “There is no law that can make me violate ethics. By the way, the very adoption of this law casts Israel in a negative light in the eyes of the enlightened world.”

The representative of the Ministry of Health, which fully participated in formulating the proposed force-feeding bill, took the diplomatic-defense side at the Knesset debate. The ministry’s deputy director general, Dr. Boaz Lev, called out to the doctors’ representatives, “Your conscience is not any better than mine.” Lev argued that one cannot determine an unambiguous ethical standard on the issue of force-feeding, saying, “We’re talking about a last resort after all other options have been explored and ruled out.”

Unlike accepted practices in other countries, the proposed legislation does not hold the medical establishment and its employees responsible for the detainees' fate, and provides immunity for participation in providing medical care that goes against ethical standards.

Deputy Attorney General Raz Nizri claimed, “A hunger striker does not want to die; he wants the Israeli legal system to bow to his wishes.” In his view, “One must create a balance between the value of people’s rights over their bodies — and society’s right to security on the other hand.” Nizri noted that the law entrusts the decision to force-feed to a judicial panel and not to an administrative-medical one. His words imply that the court should take the interest of the individual and the interest of the public at large into equal consideration.

On the other hand, attorney Ola Shtiwi, coordinator of advocacy and policy change at PHR, argues that the law gives priority to the state's considerations and public interest. She explains that the commissioner of the prison services will be authorized to petition the court, requesting force-feeding. She notes that legally, the commissioner is responsible not only for the well-being of the individual prisoner, but also for maintaining public order in jails. Shtiwi also told Al-Monitor that the opinion of the ethics committee will be just one element in the many considerations taken under advisement by the judge. This is a violation of the Patient's Rights Act, which mandates that a judge only take into account the well-being of the patient. According to Shitwi, the force-feeding law allows the judge to consider different interests, such as the influence of a hunger strike on other prisoners, beyond the individual prisoner's well-being.

Israeli government representatives have labeled the Palestinian appeal to the International Criminal Court (ICC) “diplomatic terrorism.” The international boycott of settlement products has been defined as “economic terrorism.” Now Erdan is calling hunger strikers protesting their detention without trial “suicide terrorists.” All that’s left is to convince the ICC that god gave us all the territories from the Mediterranean Sea to the Jordan River (as some of the Israeli legislators believe), that god allowed us to take control over the lives of the territories' inhabitants and that god has permitted us to prevent them from dying.