Few details have emerged from the decision to suspend the Palestinian prisoner hunger strike, and no written agreement has been signed. 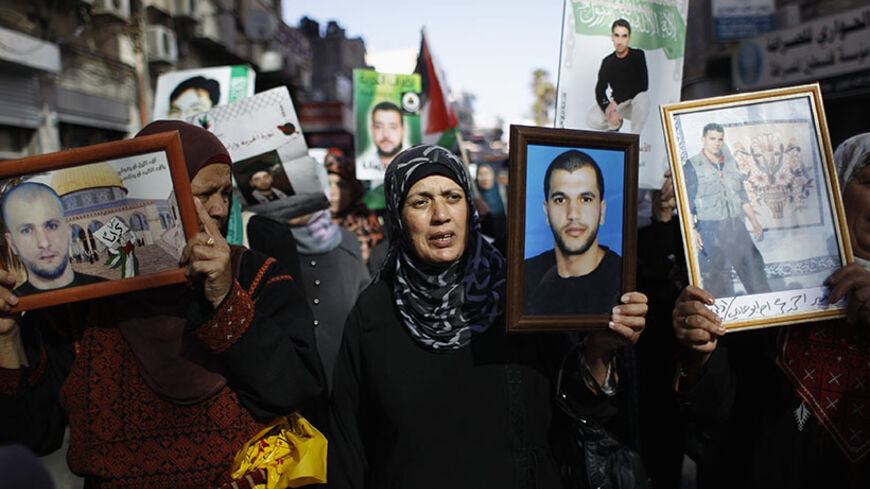 Palestinians in Ramallah hold pictures of prisoners during a demonstration in support of Palestinian prisoners on a hunger strike in Israeli jails, June 7, 2014. - REUTERS/Mohamad Torokman

Sixty-three days after they declared an open-ended hunger strike, some 75 Palestinian administrative detainees announced on June 25 that they have suspended their hunger strike. Few details have emerged, but the Palestinian prisoners succeeded in exposing the injustice of administrative detention without putting a stop to this undemocratic practice.

No written agreement has been signed, a point Israel insisted on. But Al-Monitor sources among ex-prisoners point to some small signs of success despite the general observation that the prisoners failed in their stated goal of ending the Israeli practice of detaining Palestinians without charge or trial.

Political events, especially the disappearance of the three Israeli teenagers and the large arrest campaign, have caused a major change in tactics for the hunger-striking prisoners. The over 100 detainees who were held without trial or charge when the April 24 hunger strike began, found their numbers nearly doubling in the past weeks as Israel detained hundreds of Palestinians without any charge or evidence against them. The campaign to find the three Israeli teenagers who disappeared June 12 has also made the Israelis so sour and angry that the Palestinian prisoners realized this was not the best time to press them on what they consider a deterrent weapon — administrative detention.

Prisoner leaders as well as their counterparts outside had concluded a week ago, according to a former Popular Front for the Liberation of Palestine (PFLP) prisoner in Bethlehem, that a face-saving formula must be found to end the hunger strike. The first problem was that the Israeli prison authorities had separated the prison leaders into different prisons and later, when their physical condition worsened, in separate hospitals. Therefore, the priority was to find a way to regroup the leadership committee that was made up of eight prisoners. The committee was comprised of two representatives each from Fatah, Hamas, the PFLP and Islamic Jihad.

The Israeli prison authorities, which had previously refused to recognize the prisoners committee, finally made this small concession and brought all eight prisoners to Tel Hashomer Hospital in the center of Israel to allow them to reach an agreement. The Israeli prison authorities also allowed Palestinian lawyer Ashraf Abu Snenieh to meet with the hunger-striking prisoners. Sheikh Hassan Yousef and Mohamamd Abu Tir, two elected Hamas members of parliament who were recently arrested in the Israeli campaign following the disappearance of the three teenagers, were brought in to help the prisoners reach consensus.

While no document was signed between the prisoners and the Israeli prison authorities, sources among some of the released prisoners in Ramallah told Al-Monitor that the hunger-striking prisoners received assurances that administrative detention will not be indefinitely repeated. The sources say that prisoners are convinced that Israel will only hold Palestinians under administrative detention no longer than one year, keeping the renewal of the six-month detention to a single renewal. Israeli officials have refused to make public any of the understandings that the prisoners reached with the Israeli intelligence service, Shin Bet, which has been carrying out the bulk of the negotiations with the prisoners. The prisoners’ hunger strike also brought the Israel Medical Association at loggerheads with the government over the idea of force-feeding prisoners, which it considers a form of torture. A law to allow force-feeding was stalled after the first reading in the Knesset because of the opposition from the Israel Medical Association.

Qadura Fares, the head of the Palestinian Prisoners’ Society, said in a news conference June 25 that the prisoners have hit a wall. For now, the prisoners have suspended, not ended, their hunger strike. In 2012, a similar strike was suspended and then renewed four months later, bringing an individual victory to administrative detainee Khader Adnan after a 66-day hunger strike.

The Palestinian struggle to end the Israeli practice of arrest without trial or charge has failed to end this repressive act, but the hunger-striking prisoners have raised the profile of this undemocratic Israeli practice. The timing of the hunger strike and the political atmosphere as a result of the disappearance of the three Israelis was unhelpful to produce major change in the way Israeli security deals with the Palestinian population. But while the administrative detention has not been removed as a legitimate act by Israel, the exposure of this practice has added to the view that Israel is not a democratic state when it comes to the non-Jewish population under its military control.