Freed Palestinian prisoner: Swap deal with Israel is worthless if it excludes the sick

In an interview with Al-Monitor, freed Palestinian prisoner Mohammed Allan talks details about his detention and release, stressing that he would not hesitate for one moment to resume his hunger strike if the Israeli army were to put him under administrative arrest again. 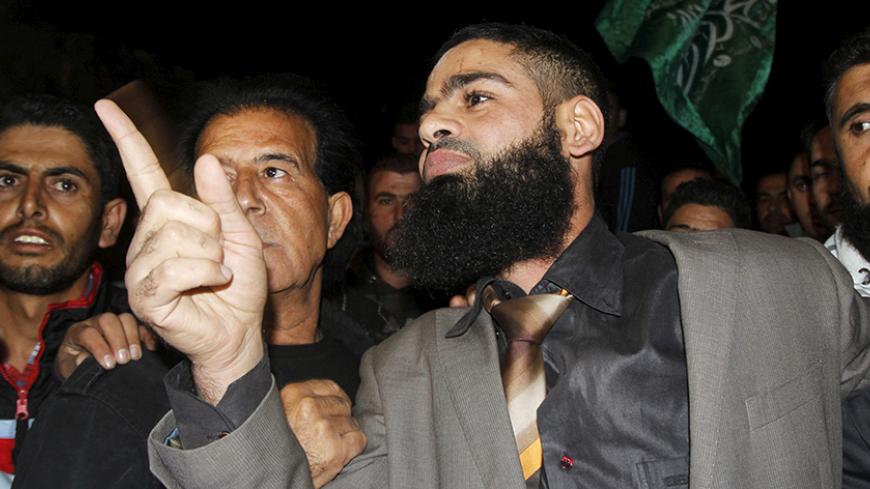 Palestinian detainee Mohammed Allan gestures upon his release from an Israeli jail, at his house in the West Bank city of Nablus, Nov. 5, 2015. - REUTERS/Abed Omar Qusini

Freed Palestinian prisoner Mohammed Allan, who went on a 66-day hunger strike, considered any prisoner exchange deal between the Palestinian resistance and Israel to be worthless if it did not include the sick and old, who suffer the greatest as a result of the conditions of their detention in Israeli jails.

In an interview with Al-Monitor, Allan revealed that his decision to go on a hunger strike was made out of conviction and after forethought. He knew the repercussions of the decision, which nearly cost him his life. He said he would not hesitate for one moment to resume his hunger strike if the Israeli army were to put him under administrative arrest again.

Allan is one of the few Palestinian prisoners who went on an open-ended hunger strike due to the conditions of their detention, with some of them nearly dying as a result.

Allan lives in the city of Nablus, north of the West Bank, and is a lawyer and not married.

Al-Monitor:  What were the reasons for your arrest by the Israeli army? Were you formally charged with anything?

Allan:  The Israeli army arrested me three times. The first was in 2006, when dozens of soldiers stormed my house in the village of Ainabous in Nablus, took me to my law office, searched and destroyed its contents, then led me to Megiddo Prison, where I spent three years and was released on March 31, 2009. The second time was in 2011, when I remained in prison for 50 days.

I was arrested a third time on Nov. 6, 2014. The Israeli authorities never charged me with anything, and throughout my detention, I was only asked two questions: Why was I still unwed and did I pose any threat to the Israeli state? On Nov. 11, 2014, Israeli intelligence put me under administrative detention for six months.

When the six-month period verged on expiring, the Israeli Prison Service [IPS] extended my administrative detention for an additional six months, beginning May 5, 2015 and ending Nov. 4, 2015. Again, said extension was not legally justified, and the court rejected the appeal that I filed through my Palestinian lawyer.

Al-Monitor:  Why did you go on a hunger strike during your detention?

Allan:  I felt demeaned and subjected to the whim of ordinary people when my administrative detention was extended for an additional six months, and I was transferred to the Negev Desert prison south of Israel, where I was deprived of my right to normally live my life. I felt humiliated and enslaved.

More than once, I appealed to Israeli courts asking that my administrative detention be ended and that I be released, to no avail. Israeli judges are puppets in the hands of the Shabak [Israel Security Agency, also known as Shin Bet], and my only remaining recourse was to go on a hunger strike.

When I officially announced going on strike on June 17, 2015, I was put in solitary confinement at Ela Prison in Beersheba south of Israel, then transferred to Eshel Prison and Ramleh Hospital as my health deteriorated midway through the hunger strike. On Aug. 10, 2015, teetering between life and death, I was transferred to the intensive care unit at Barzilai Medical Center south of Israel.

Al-Monitor:  How did the Israeli prison authorities deal with you during your hunger strike? In July, the Knesset passed a law allowing the government to force-feed hunger strikers should their lives become at risk. Have you ever been force-fed?

Allan:  The Israeli prison authorities dealt with me like any other Palestinian prisoner. They used to curse and insult me, and sometimes I was kicked and roughed up. I was also subjected to psychological and physical pressure. Israeli jailers stripped and searched me more than once during the hunger strike. I also was threatened several times to be force-fed if I did not end my strike. The first of those threats was on Aug. 7, when the IPS declared that it would file a request to the Israeli court, demanding the implementation of the force-feeding law, which was approved by the Knesset in July.

However, the request was denied. After much pressure on Israel at home and abroad with regard to force-feeding me, the IPS decided to transfer me from the Soroka Medical Center, where I was staying, to the Barzilai Medical Center, in the hope that doctors would order mandatory medical tests and try to force-feed me, as the medical team in the Soroka Center refused to do so.

Al-Monitor:  What are the conditions of the deal you had with the IPS to release you?

Allan:  During my last arrest, there were two deals, both of which the IPS breached. The first was to end my hunger strike and complete my detention in order to be released afterward, without renewing my administrative arrest. I refused and demanded full freedom. I carried on with my strike until the Israeli court caved in. This was when I ended my strike on Aug. 19, 2015, but my parents preferred that I stay in Israeli hospitals to receive treatments for some time. When Israelis saw that my health had improved, they rearrested me, especially because of pressure from the people, who saw the situation from a different perspective that a Palestinian was able to impose his will on the state.

The second deal was when I went on my second hunger strike on Sept. 16, 2015, following my arrest in an Israeli medical center. Three days afterward, I suffered a health setback as I had not yet recovered from my first strike. The Israeli court offered several guarantees for my immediate release upon the completion of my detention period and not to renew the administrative arrest. When there were no more grounds for my arrest, I was released on Nov. 4.

Al-Monitor:  Should the Israeli army arrest you again, would you resume the hunger strike?

Allan:  Definitely. I would do it in a heartbeat if I get arrested again. This does not mean I like doing it. I would resort to other means as well, as I did last time to prevent another administrative arrest. I am fully ready psychologically and mentally to take this step once again, even if it would cost me my life.

Al-Monitor:  What is the message the prisoners would want to convey to the Palestinian factions and leadership?

Allan:  The prisoners are making sacrifices because this is how they resist against the Israeli occupation. However, they feel that the Palestinian factions and leadership remain negligent in safeguarding their rights and making necessary efforts to release them, especially the sick ones among them. A nation that forgets about its prisoners is not worthy of freedom and dignity. Any prisoner exchange deal between Israel and the Palestinian resistance would be worthless if it did not include the release of sick prisoners.

Al-Monitor:  How do you and other prisoners view the Palestinian intifada?

Allan:  We have mixed feelings: a sense of satisfaction and fear for the intifada. The prisoners hope that the uprising will achieve what the negotiations failed to do and that it will bridge the gap in the Palestinian internal divide.