Kidnappings put Netanyahu back on offense

The abduction of teenagers in the Hebron region puts an end to Netanyahu’s political hard times, and, without a dominant defense minister such as Ehud Barak at his side, he is seen, even by the left, as a balanced authority on matters of security and leadership. 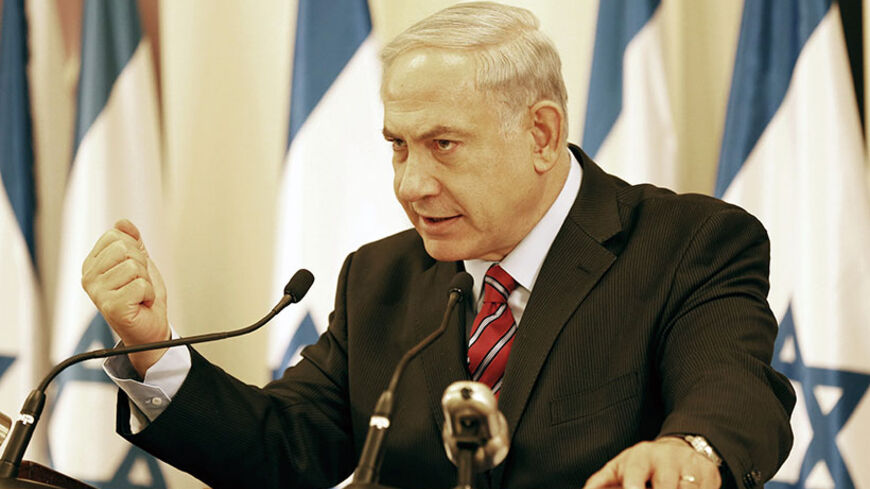 Political columns in the Israeli Friday/weekend papers described Prime Minister Benjamin Netanyahu as the big loser after Knesset member Reuven Rivlin was elected president of Israel. They all offered sweeping accounts of the rage against him in the Likud Party. But within a few hours, all of that became irrelevant.

The kidnapping of the three teenage boys suddenly dominated both the media and the public agenda. And it was with the same rapidity that Netanyahu regained his stature as the responsible adult in the room, and the person with the most diplomatic and security mileage in the government and Cabinet.

In an instant, the kidnapping erased any memory of one of the, politically speaking, worst weeks Netanyahu has had in his current term, if not the worst. His unfocused, emotional plotting to thwart the election of his sworn enemy Rivlin came crashing down around him, and he was forced to congratulate the newly elected president, though he did so without any show of enthusiasm.

Political commentators were quick to position Interior Minister Gideon Saar, the head of Rivlin’s campaign, not only as the big winner in the election, but also as a real threat to Netanyahu in the upcoming battle for the leadership of the Likud Party. The new statements on diplomatic policy by the Yesh Atid chairman, Finance Minister Yair Lapid, also echoed in the background, creating the impression that the senior partner in the coalition already considers retiring from it, because of the lack of any progress in the diplomatic sphere. All this could signal the beginning of the end for the third Netanyahu government. And as if that was not enough, the scandal du jour from Netanyahu’s wife, Sara, was also gaining momentum in the media, with the prime minister’s spokesmen forced to explain why the expensive garden furniture purchased for his official residence in Jerusalem ended up in the yard of his personal home in Caesarea.

The kidnapping freed Netanyahu of all the problems of the past week and restored him to his natural element as a prime minister whose basic, almost sole agenda, is putting an end to security threats against Israel from near and far. Who even remembers the sour face he made when Rivlin became president?

Even in the diplomatic arena, the kidnapping of the youths provided Netanyahu with considerable breathing space, while pushing Palestinian President Mahmoud Abbas into the contrite position of being forced to provide answers. Had this not been a human tragedy, Netanyahu could not have picked a better setting to extricate himself from the crises, political and diplomatic, hovering ominously over his head.

Under the current circumstances, neither Justice Minister Tzipi Livni nor Lapid will demand that the diplomatic process be resumed, and Netanyahu can even count on backing from the opposition (apart from the Arab parties). Just a moment ago, the Likud was agitated, but calm has suddenly been restored. Compared with his potential future rivals such as Saar, Lapid and Economy and Trade Ministry Naftali Bennett, Netanyahu seems like the best person to be in the prime minister’s office right now. Forget about Foreign Minister Avigdor Liberman, who has been in Africa and whose absence is especially conspicuous.

Unlike in those years when Netanyahu managed security affairs alongside then-Defense Minister Ehud Barak, current Defense Minister Moshe Ya’alon does not overshadow him. The two men have been inseparable since Friday, but the hierarchy is obvious, even outwardly. The stage belongs to Netanyahu.

It was the same way on the afternoon of June 16, the fourth day of the kidnapping crisis, during a makeshift news conference at Central Command. Netanyahu stood behind the podium, which was brought in from the prime minister’s office. Behind him, alongside the flag of Israel, stood the minister of defense, the chief of staff and the chief of Central Command. Indeed, it was the perfect backdrop for sending a message of power and leadership, two key motifs of Netanyahu’s election campaign.

The brief comments that Netanyahu delivered to the media also served the political and diplomatic narrative. It may have been a short speech, but it contained everything that needed to be said, starting with, “This is a serious event, and there will be serious consequences,” through casting blame on Abbas, and ending with a compliment for John Kerry, who spoke about Israel’s right to defend itself. Netanyahu also scolded Europe’s silent leaders, calling on “some of whom rush to condemn us for any construction in this place or for enclosing a balcony in Gilo — to strongly condemn this reprehensible and deplorable act of abducting three youths. Whoever opposes terrorism needs to condemn terrorism wherever it is perpetrated.”

These texts reflect the way that Netanyahu views his job. Behind closed doors, he tends to speak extensively about the security challenges faced by Israel, chief among them the Iranian threat. Frequently, he will position himself as the only leader who knows how to respond to these challenges, especially compared with the new generation of politicians such as Lapid and Bennett, who are hoping to succeed Netanyahu.

The question now is how Netanyahu will continue to manage this crisis, which, under certain circumstances, could also snowball into a major military operation, with all that this would entail, turning all the tables in the event of a military and diplomatic escapade. Unlike former Prime Ministers Ehud Olmert and Ariel haron, who launched large-scale operations in the West Bank and Gaza, this time the international community will not grant Netanyahu room to maneuver.

Meanwhile, however, in the political arena, even Netanyahu’s opposition rivals on the left are praising the way he has acted so far. Five days into this harsh incident, Netanyahu is still acting reasonably and cautiously in everything pertaining to the use of military force.

Furthermore, Netanyahu has a proven resume of restraint whenever it comes to starting wars and military operations. This actually makes it easier for the left to back him on this matter.

A senior Likud member says that Netanyahu’s restraint in using force stems from his deep understanding of the situation and his experience: “The Vinograd Report on the government’s failings in the Second Lebanon War had a huge impact on him. He’s very cautious.”

Netanyahu himself has also stressed that he is no warmonger. In 2007, while serving as opposition leader, he used a holiday interview with the Israeli daily Maariv to respond to claims by Olmert that he was “panic-driven” and always “cried wolf.” In his response, Netanyahu said: “I was not the one who responded within three hours to the kidnapping of our troops, and I was not the one who went to war when it turned out, in hindsight, that none of our systems were ready for it. I would have prepared differently and managed the whole thing differently.”

Netanyahu brought the issue up again on the eve of the last elections (October 2012). In a speech to the Knesset he took pride in the fact that in the seven years that he served as prime minister, “Israel did not set off on any unnecessary wars.”

All it takes to fully understand how ingrained this impression is within the political system is to listen to Meretz Party leader Zehava Gal-On. She told Al-Monitor: “Over the past decade, Olmert and other leaders of the peace camp had aggressive rhetoric and even more aggressive behavior. They may have talked about peace, but they launched wars and military operations without any consideration whatsoever, and these were of no help diplomatically or security-wise. Unlike them, Netanyahu uses the rhetoric of propaganda and aggression, but when put to the reality test, he did not set off on any military adventures, apart from Operation Pillar of Defense, which was even limited and which took place only after the settlements of the south came under heavy rocket fire. So it can be argued that while his rhetoric is aggressive, his actual behavior is reasonable.”

Nevertheless, Gal-On accompanied this statement with a warning. “I sincerely hope that he will act reasonably and balanced this time as well, and not fall under the influence of Bennett’s belligerence or the delusional proposals of the defense establishment.”