The Islamic State of Iraq and al-Sham (ISIS) is not the only group operating in regions now under its banner. 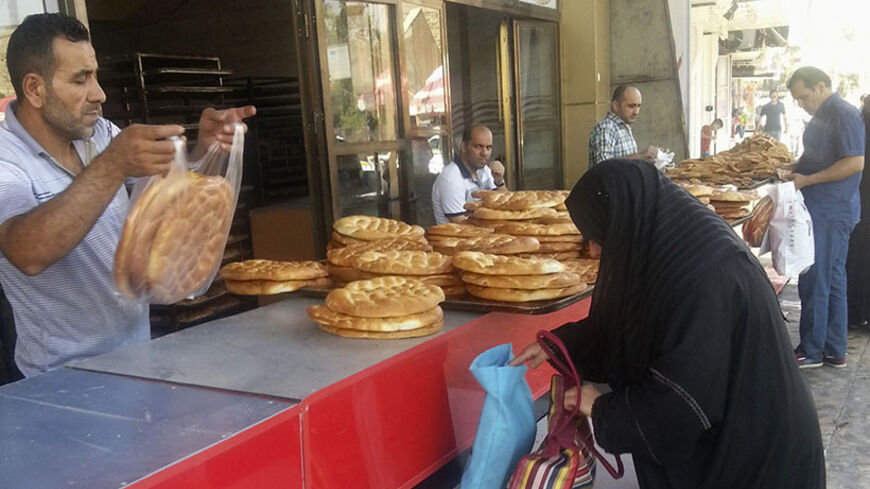 When political crises erupt, observers tend to focus on the events and developments and forget about the people whose blood is shed in the storm. This is the case now with the people of Iraq, who have to choose between the bad and the worst.

The general absence of the media in the areas that fell to the Islamic State of Iraq and al-Sham (ISIS) has resulted in not enough attention being paid to the situation of the people there.

Al-Monitor met and contacted dozens of residents living in these areas or who have been displaced from them — specifically Mosul and Diyala — to get a clearer picture of what is happening.

The first question that comes to mind is who holds power in these areas. The name “ISIS” doesn’t tell the whole story about the many armed groups that received backing and support from various tribal, religious and political leaders in all Sunni areas.

All of Al-Monitor’s sources confirmed that the general title used by all these groups is “Islamic State” and Baathists or others are not named in titles or slogans. However, when you ask the gunmen, most of them say that they are not ISIS, and that they would fight ISIS if it tried to impose its authority on them.

Yet at the same time, everyone asserted that there are foreign fighters of Arab and Western nationalities, indicating the strong presence of ISIS. What can be inferred from these reports is that there is a general and very clever coordination between the various types of armed groups and that they have agreed to hide under the ISIS heading for various reasons, including the use of psychological warfare to terrorize the Shiite street.

This theory is supported by the absence of the armed groups that were recently prominent and active, including Baathists, Naqshbandis, tribal rebels and others.

How did they disappear overnight? It appears the people’s reactions to the fighters have changed.

At first, many people were frightened and fled in large numbers to neighboring cities, especially in Iraqi Kurdistan's cities of Sulaimaniyah and Erbil. Others stayed home and quit going in to their places of work, in both the public and private sectors.

But the fighters gradually managed to gain the people’s confidence and they returned to work, tired of long-term conflict in their cities. They had long been the victims of both corrupt military forces and armed militias at the same time and so they welcome any sort of stability. These areas do not have much in the way of law enforcement. Salaries are not being paid and traffic police are absent, as are other aspects of public order.

Some of the displaced have returned to their towns because they are no longer afraid and because they faced difficulties settling in the Kurdistan Region of Iraq. The people in the cities were surprised to see that their fellow citizens had been recruited by armed groups and appeared among the ranks of the fighters.

The public reaction to what happened is complex. On one hand, people feel better because the fighters removed the concrete barriers put up by the military. Their lives are easier without being insulted and blackmailed as before. On the other hand, the people don’t trust this stability. They know that this temporary alternative is not an ideal solution and involves several problems that will soon emerge, and the fighters have begun collecting taxes — paid as protection money — in some areas.

It is interesting that the fighters are trying to present a very different picture from the image of ISIS in Syria, either because they have learned from their previous experiences or because the issue is much more complicated than just ISIS. Sources confirmed to Al-Monitor that religious minorities are not being harassed. Despite that, most minorities left those areas because they fear and mistrust the fighters. Also, there has been no attempt to impose Sharia, and the gunmen only distributed a statement asking the citizens to comply with Islamic law.

In place of Iraqi courts, the fighters established Sharia courts that are presided over by mostly non-Iraqi clerics. After a parade early on to showcase their strength and the spoils they seized, the gunmen left the cities. They may have done that to reassure the citizens and make them sympathize with them. The gunmen also try to punish anyone who is hostile to the citizens.

This, however, doesn’t mean that the insurgents are peaceful. Along with the picture described above is a scene of widespread death and destruction. The militants are targeting specific addresses and killing their targets without mercy. Their targets are Shiites — the Iraqi army — and the Sunnis who sympathize with the government, such as members of the Sahwa forces and others.

Regular government employees and police officers must go to the militants’ headquarters and repent, and they are given a paper attesting their innocence. The names of those individuals are registered for later reference in case they return to dealing with the government, in which case they would be killed.

The execution methods vary from a shot to the head, the gunmen’s most humane method, to beheading from the front or the back. Some gunmen, for religious reasons, tried to damage Mosul’s archaeological sites, including the tomb of the famous Muslim historian Ibn Athir and some statues of famous Muslim personalities.

Although people are not happy with these incidents, they hope that ISIS will leave their regions to the local forces who are not as extreme. However, there is no guarantee that this will happen, as ISIS has been working to build its state in Iraq and Syria for a long time.

It seems that the armed groups have prepared themselves to stay a while and are building government institutions completely independent of Baghdad. The people are confused between an uncomfortable past under the domination of the army, a terrifying present and an uncertain future under these fighters. This complex picture suggests to the Iraqi government that it will lose those areas permanently if it doesn’t develop a comprehensive and thoughtful solution to the problem in all its political, economic and security dimensions.