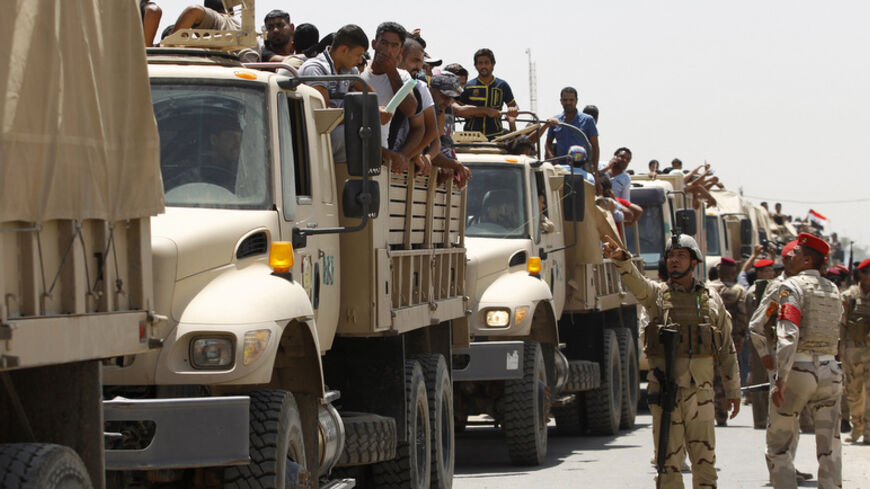 Volunteers, who have joined the Iraqi army to fight against the predominantly Sunni militants who have taken over Mosul and other northern provinces, travel in army trucks in Baghdad, June 14, 2014. - REUTERS/Thaier Al-Sudani

The recent lightning victories in Iraq of the Sunni extremist group the Islamic State of Iraq and al-Sham (ISIS) have undoubtedly left many Middle Eastern leaders surprised, asking, "What does it mean for us?"

In Iran, when it comes to dealing with Iraq, there are two main bodies: first, the government headed by President Hassan Rouhani, which deals with Iraq through diplomatic and trade relations; and second, the security forces, chief among them the Iranian Revolutionary Guard Corps' (IRGC) Quds Force, headed by Gen. Qasem Soleimani, referred to as the "shadow commander" by some in Iraq.

In the short run, both groups in Iran can gain from the recent ISIS victories in Iraq. In the long run, both have much to lose.

Let's start with Quds Force chief Soleimani. In the immediate future, he will be viewed as the savior of Iraq's Shiites. Panicked by the sudden victory and extreme cruelty of ISIS forces, an increasing number of Iraqi Shiites are likely to look upon him as the Iranian Shiite knight in shining armor, charging to their rescue. Some reports state the Quds Force is ready to become directly involved in the fighting against ISIS. Other reports say the Quds Force is planning the defense of Baghdad and training Iraq's armed forces. Either scenario, if true, is likely to boost the IRGC's popularity among Iraqi Shiites and win it new allies, especially among the civilian population.

In the short run, President Rouhani also has much to gain. The ISIS victories will make Iran look like an attractive partner to the United States in the fight against ISIS. Should the West decide to cooperate with Iran, this would boost Rouhani's position domestically, as he could say his moderate approach toward the United States made the country dependent on Iran for help. Rouhani could then use such help as a bargaining chip in the P5+1(the five permanent members of the UN Security Council plus Germany) talks to extract further concessions.

Conversely, in the long run, both Rouhani and Soleimani could stand to lose from the possible long-term continuation of the ISIS crisis.

In the long term, the current crisis could ruin Iraq's economy, which is a multibillion dollar export market for Iranian non-oil products. Further, Iran has plans to start exporting gas to Iraq this year, with Iran hoping to earn $3.7 billion a year.

The longer the ISIS crisis continues, the more difficult it will be for Rouhani to create a diplomatic rapprochement with the United States, as this crisis could strengthen the hand of Iran's conservatives, who are against such a scenario. The same applies to Rouhani's aspirations to improve relations with the Saudis.

The prognosis of the continuation of the ISIS crisis is not positive for the Quds Force either. This is especially true if reports are true that the Quds Force is actively engaged against ISIS.

We should remember that ISIS consists of many battle-hardened and experienced terrorists, who are reportedly sitting on a fortune of $429 million. The Syrian civil war has already led to the highest number of deaths of Quds Force operatives since the end of the Iraq-Iran war. Iraq could turn into a similar situation, which could dent Iran's deterrence posture.

As inevitable as supporting the Shiite majority in Iraq would be for the IRGC, after its support for Syrian President Bashar al-Assad, its involvement in Iraq will make the IRGC, and with it Iran, look even more like an exclusively pro-Shiite force. This is likely to damage years of hard work by politicians such as Akbar Hashemi Rafsanjani and Rouhani to repair relations with the Sunni world.

The longer the fighting with ISIS continues, the likelier the possibility that ISIS will target Iranian positions and towns along the Iraq border, creating new and unwelcome security challenges for Iran.

Last but not least is the question of Iraq's political future. Iraqi Prime Minister Nouri al-Maliki, who is believed to be close to Iran, has created even more sectarian divisions in his country. This has, in turn, made Iraq more unstable, and consequently created more challenges for Maliki's Iranian allies. If Iran is interested in the return of stability to Iraq, it has to find an alternative ally in Iraqi politics. This will not be an easy task.

For years, many Iranian analysts saw the US toppling of Saddam Hussein as a strategic victory for Iran. Recent events have shown such observations to be at least partly inaccurate. The toppling of Saddam has also come at a cost to Iran.

This is in addition to repeated Iranian calls since the beginning of the US invasion of Iraq for the US to leave immediately. Now that the United States is gone, Iran and its Shiite allies are left alone facing a deadly enemy. As the old saying goes, be careful what you wish for.