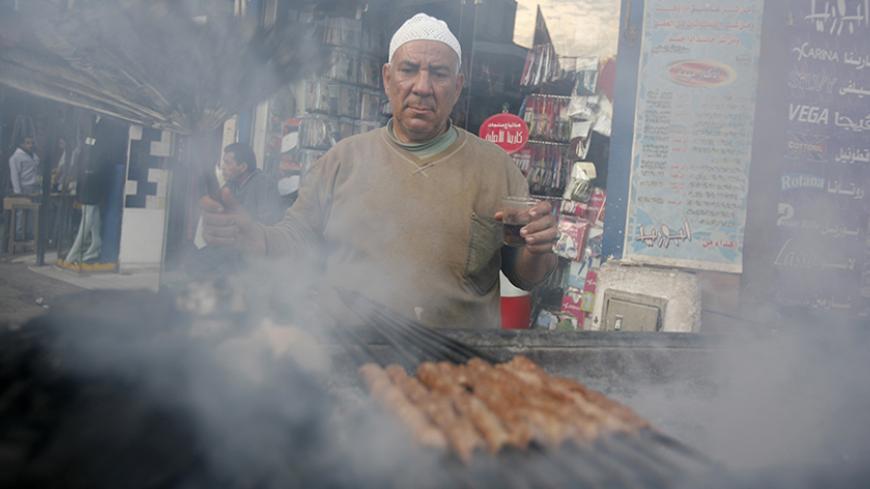 A man grills kofta kebab, which is used to prepare sandwiches for passersby, along a street corner in Cairo, Feb. 23, 2010. - REUTERS/Asmaa Waguih

Two seemingly unrelated news items have caused a great deal of controversy on the Egyptian scene.

The first was the announcement by a medical committee to postpone clinical use of a new treatment for the viruses that cause Hepatitis C and HIV using a controversial device developed by Egypt’s Armed Forces Engineers Corps until after — and if — the device’s efficacy and safety is established, which could take at least a year.

The medical task force was commissioned by President Abdel Fattah al-Sisi, when he was still minister of defense, to evaluate the alleged miracle cure. While army supporters cheered the invention and hailed it as further proof of the army’s capacity to deal with any problems facing the country, activists, skeptics and many medical and pharmaceutical professionals ridiculed the alleged qualities of the device, nicknaming it "Abdel-Atti’s Kofta Device."

In a Feb. 24 televised address, Ibrahim Abdel-Atti, who is neither a doctor nor an engineer, claimed that the device uses electromagnetic waves that resonate with the frequency of the bonds holding the virus' components together to turn them into harmless proteins. "I take AIDS from the patient, and give him back a kofta skewer," he claimed. Kofta, as those familiar with Middle Eastern cuisine would know, is minced meat usually barbequed on skewers, quickly became the device's nickname.

Abdel-Atti was appointed as an honorary general to lead the development team for the device. The medical task force found that the device’s testing protocols insufficient and inappropriate and refused to certify it for wide-scale treatment starting June 30, as previously promised.

The second piece of news concerns Egypt’s coming parliamentary elections and a temporary law that Adly Mansour issued on his last working day as interim president. Out of a total of 567 seats, the new law gives 420 seats (77.8%) to independent candidates and 120 seats (22.2%) to closed party lists dedicated to Christians, women, young people, laborers and farmers, persons with disabilities and Egyptians living outside Egypt. These lists will be proportionally distributed according to the votes won by each list. The law also designates 5% (27 seats) for deputies appointed by the president. Election procedures will start by July 18 and the election itself is expected in the fall of this year.

Most political parties protested the law, which marginalizes their role and threatens to produce a parliament similar to what Egypt had prior to the 2011 revolution, when only candidates with deep pockets, tribal power or support from religious streams dominated the political scene. This system led to widespread political corruption and a weak parliament, which failed to represent Egypt’s diversity or benefit from its rich professional and intellectual talents. In September, I argued in Al-Monitor that Egypt needed a proportional electoral system to ensure effective legislature, good governance and fair representation of its diversity.

Now, how are these separate issues related?

When a neutral committee was formed to evaluate the claims of the "miracle device," it discovered that it was not ready for use. Whether it will ever be ready has yet to be seen, but many doubt this, simply because the device’s development process failed to comply with standard medical research and development practices. At best, the device’s success was announced too early, using a propaganda campaign that harmed the credibility of not only the army, but also the country. At worst, the device is a hoax and those involved in fabricating the claims of its abilities must be held accountable and possibly tried for fraud and criminal conduct in carrying out clinical trials that endangered unwitting patients.

Sisi has promised major economic, fiscal, administrative and social reforms as well as the launching of national projects to rescue the country’s ailing economy and fix its inefficient government apparatus and dysfunctional urban structure. With a parliament that by design will consist only of cheering supporters of Sisi and his policies, the country risks repeating the "kofta" scandal mistakes on a national scale and with epic catastrophic consequences that Egypt in its current state may not be able to withstand.

Some statists and blind supporters of the army and Sisi make it sound as if having an effective opposition and a strong parliament is a luxury that Egypt cannot afford at the moment. They point to the country’s vulnerable situation after a failed first transition and three years of turbulence. But nothing could be further from the truth. What Egypt cannot afford is to dive into ill-thought-out policies and legislation, even if designed with the best of intentions, without the scrutiny of a powerful parliament and watchful opposition.

The medical committee that eventually halted the application of the "kofta device" may have saved thousands of lives and millions of pounds and spared Egypt embarrassment and ridicule as well as lengthy lawsuits and hefty compensation to defrauded patients and their families. But even in the unlikely event that the "kofta device" proves successful after all, the lesson learned is that due process in politics, legislation and medical research is not something one can conveniently bypass.

There are no shortcuts in history. Governance, democracy and development are not random destinations at which one can arrive through miracles, reliance on the goodwill of a national hero or trust placed in any single institution, no matter how worthy it may be. Success is a path characterized by hard work and dedication, and more importantly, by methodically following due process in every aspect.

Due process is the insurance policy that enhances prospects for success, minimizes risks and guarantees that even if failure occurs against the odds, it will be a learning opportunity that will eventually lead to imminent success.

Egypt needs strong political parties, an effective opposition and a powerful parliament that can provide checks and balances against the executive branch and debate government decisions and policies. Sisi can learn from this now by fixing the election and protest laws and releasing the hundreds of activists who should be able to say that "The king is naked" without being sent to jail for 15 years.