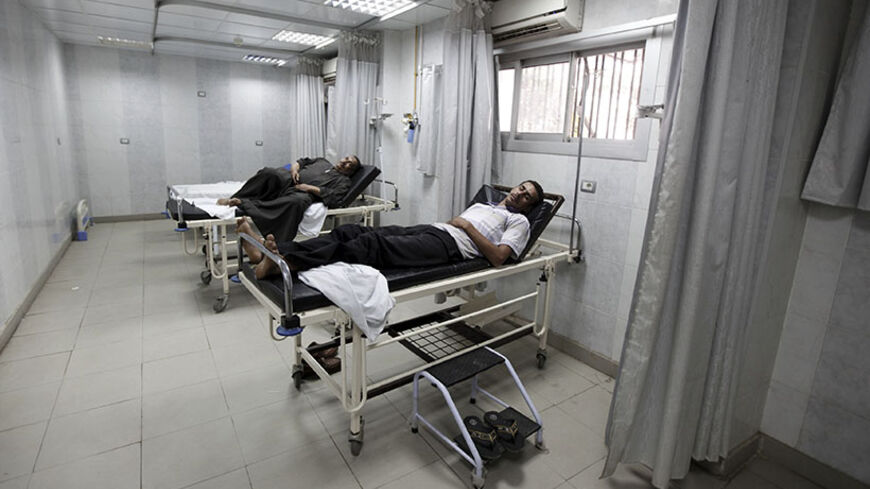 Patients wait to see a doctor at a public hospital in Cairo, Oct. 2, 2012. - REUTERS/Amr Abdallah Dalsh

CAIRO — In April 2012, I attended a news conference at which the Muslim Brotherhood's powerful financier and strategist Khairat El-Shater announced both his candidacy in the presidential election and the "Renaissance Project," which he claimed would put Egypt among the world's richest countries within his first term as president. Weeks later, Shater was out of the 2012 presidential race and Mohammed Morsi became the Brotherhood's second pick, dubbed by Egyptians the "spare tire."

Morsi placed less emphasis on the Brotherhood's Renaissance Project, but during another news conference I attended at one of Cairo's poshest hotels in May 2012, he declared his "100-day plan." Flanked by his aides, bodyguards and political lackeys, Morsi declared that within his first hundred days in office, he would resolve Cairo's security, traffic, garbage, fuel and bread issues. I turned off my voice recorder, stopped taking notes and looked at the bearded liar as he shamelessly vowed to resolve the decades-old crises of a city of 20 million.

Abdel Fattah al-Sisi, Egypt's new president and former defense minister, who put both Morsi and Shater behind bars, was much smarter. He let the lies be told by the propagandists surrounding him. That being said, the Sisi era's lies are much more insulting than those of the Muslim Brotherhood. They targeted the most vulnerable and desperate Egyptians.

In the last week of February 2014, three months before Sisi became president, he sat in the front row of a massive news conference held by the Engineering Authority of the Egyptian Armed Forces as Gen. Ibrahim Abdel-Atti, an unknown man in military uniform, said he would "take AIDS from the patient and give him back a kofta skewer."

For weeks after the introduction of the "Complete Cure Device," Sisi's loyalists, affiliates and media partners continued to promote what a lot of people viewed one of the biggest scandals in the long history of Egypt. They said the device successfully detected and cured HIV, hepatitis C, cancer, diabetes and almost every other disease for which the world could not find a cure. Of course, whoever dared express doubt was branded a traitor.

The military's Engineering Authority, which is responsible for manufacturing and operating the cloaked-in-secrecy device, said it would start curing people on June 30, 2014, the anniversary of the military intervention that toppled Morsi.

Fortunately, I never attended any of the news conferences for the Complete Cure fiasco. As a cancer survivor, the military's claim offended me, like many other ill people capable of reading the nonsense published by the so-called scientists.

Meanwhile, I received a call from a dear friend, Muhammad Sayyed, informing me that his mother was suffering a serious case of hepatitis C accompanied by liver tumors. Lying in pain at Cairo's Greek Hospital, the 54-year-old woman's abdominal scans and blood tests showed a plight that afflicts hundreds of thousands of Egyptians: Her liver was almost destroyed. The hospital's supervising doctors called it a hopeless case.

Being a cancer survivor with a firsthand experience with Egypt's embarrassingly inept medical scene, I happily volunteered to accompany Sayyed in his search for a doctor who might give us some hope, any hope. We met some of Cairo's top oncologists, clinical pathologists and liver and hepatitis C specialists.

The internationally respected oncologist who treated me between 2008 and 2011 said he could not intervene until her liver was stabilized, an impossibility at such a deteriorated stage, leaving us with nothing but incompetent doctors and the misleading promises echoing from the military's ongoing propaganda.

Waiting at the clinic of Dr. Ibrahim Negm, a well-known liver specialist, on June 24, six days before the intended date for the military to start its "curing," Sayyed and I looked up reports on liver treatments. The first to show were Abdel-Atti's statements confirming that his device would be put into use as of June 30.

"To those who mock my invention, wait for the major surprise and a second slap. I trust God and the outstanding results between my hands," said Abdel-Atti in his early June statement.

Coinciding with Abdel-Atti's challenges to detractors, Egypt's Health Minister Adel Adawi made his own statements regarding the US-made hepatitis C medication that Egypt "imported for 1% of its international price after prolonged negotiations."

"I ordered the Medical Registration Authority to expedite the process of registering the new medication and provide it to the local market as soon as possible," said the minister in statements to the local press.

No government official explained why Egypt was importing a US-made medicine for an illness it already invented a cure for, even if bought at a mysterious 99% discount.

On June 26, Negm, the liver specialist who was our last resort, told Sayyed and me that there was nothing to be done for his ailing mother. She was released from the hospital and went home with some basic medications. In my country, where 22% of the population suffers from hepatitis C and whose government claims to have invented a cure, my friend's mother was told to go home and wait to die.

Sayyed's mother, along with millions more who waited for their military to start treating them, was finally told on June 28, 20 days after Sisi's arrival in office, that the Complete Cure Device required six more months of testing to assess its effectiveness.

The military's news conference on Sunday was very reminiscent of the Muslim Brotherhood's Shater, who several weeks after declaring his Renaissance Project told the media that it "wasn’t precisely an applicable project but rather some advice and recommendations by specialists," and of Morsi, who on his 100th day in office told Egyptians that 70% of Cairo's traffic and garbage problems were resolved at a time when the piles of garbage were as stifling as the traffic jams across the capital.

Morsi and Shater are both behind bars, despised by the millions they lied to, while Sisi, who managed their ouster, is a president whose regime walks a path very similar to that of the Muslim Brotherhood. Now, how far will Sisi's regime take the Complete Cure lie?