Egypt’s Cairo University recently announced that it has found a treatment protocol for COVID-19 and is awaiting its approval for use. 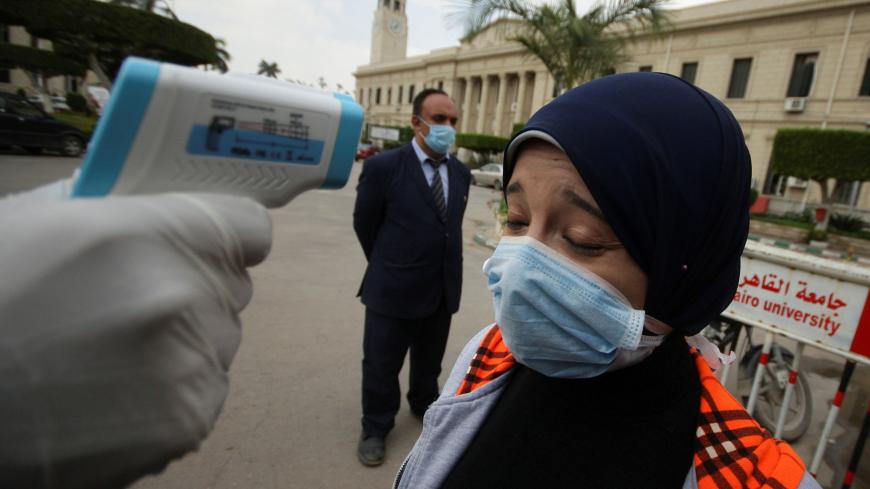 CAIRO — The first country to develop a treatment or vaccine for COVID-19 will win international recognition and likely profit financially as the novel coronavirus has been causing massive human casualties and economic losses since December 2019. Egypt appears to have joined the race for a cure, with Cairo University claiming April 6 to have developed a treatment protocol for the coronavirus that is now awaiting approval from the Ministry of Health and Population.

Mohammad al-Darouti, a professor of medicine at Cairo University, told Al-Monitor that the protocol is based on the use of two drugs available on the local market, saying it is expected to help curb mortality rates among COVID-19 patients as well as treatment expenses. He noted that once the Health Ministry approves the treatment, it can request approval from the World Health Organization.

Ahmed Kandeil, a professor of epidemiology of the National Research Center, told the press March 26 that the center is working to develop COVID-19 diagnostic devices as well as a vaccine.

On April 6, rumors circulated on social media that Egypt has discovered a treatment or vaccine that was a part of the medical aid delivered to Italy April 4. The rumors also claimed that the number of confirmed cases and deaths started lowering in Italy the next day. Similar claims circulated regarding China and Zayed’s visit there March 2.

Such claims were met with sarcasm from social media users who said it is impossible for Egypt to discover a cure in light of its comparatively underdeveloped and funded research sector.

A professor of pharmaceutical sciences at Ain Shams University told Al-Monitor on condition of anonymity that it is impossible for any treatment to lower the number of confirmed cases of the virus and of deaths in just 24 hours. He went on saying that the minister’s visits to Italy and China have more likely focused on sharing experiences with coronavirus treatment protocols.

He said it would be possible for the two countries — especially Italy, where the EU regulations on medications apply, to use a drug or medication that has yet to be internationally approved. That does not mean that Egypt is unable to produce a vaccine, he added, saying, “There are plenty of creative brains in the medicine and pharmacy sectors, but recognized procedures need to be followed before a medication or vaccine is internationally approved, so as to avoid repeating its 2014 failure on Hepatitis C and HIV.

The Egyptian Armed Forces Engineering Authority announced in February 2014 that it had sponsored the development of a new radiotherapy device to treat Hepatitis C and HIV by a team of Egyptian scientists. Many physicians and social media users were skeptical, prompting the armed forces to inquire into the matter, concluding that the device did not work. The doctors who took part in the device’s design had their membership in the Medical Syndicate suspended.

Mahmoud Bassiouni, a professor of radiotherapy at Cairo University and former undersecretary of the Ministry of Higher Education and Scientific Research, told Al-Monitor that radiotherapy has proven to be effective in treating viruses such as Ebola. Theoretically, it could also be used in the treatment of Hepatitis C, he added.

Bassiouni noted, “The biggest challenge to any new discovery or medication in Egypt lies in the limited opportunities for clinical trials. The latter play a major role in the trajectory of any discovery or medication. Religious considerations and the lack of laws regulating these trials are behind such limited chances.”

On March 30, a World Health Organization representative stated that the Egyptian authorities had approved clinical trials for coronavirus treatments. The state has yet to comment on the news.

Back in May 2018, a number of Al-Azhar scholars including Hamad Karimeh, a professor of comparative jurisprudence at Al-Azhar University, had lashed out at parliament for passing the first bill regulating clinical trials, protesting that it contradicts Sharia. The pressure may have prompted Egyptian President Abdel Fttah al-Sisi to refuse to approve the law and refer it back to parliament for further examination. The law continues to be under study.

Reda Mostafa, former director of Acapi Pharmaceuticals Egypt, told Al-Monitor that another challenge lies in political demands to fast-track the process. “This would require that Egypt produce the drug or vaccine in a short period of time. That is hard to achieve in light of the limited budget allocated to scientific research,” he explained.

Hala Adly Hussein, president of Bio Misr Pharmaceutical Industries, told Al-Monitor that the production of a cure could take a long time, which is why Egypt is focusing on a treatment protocol.

She added that in the event a vaccine or medication is found, Egypt could coordinate with China to produce it so as to benefit from China's scientific facilities and huge budgets for scientific research.