The controversy caused in Egypt by a new device to treat hepatitis C and HIV continues, with disciplinary action being recommended by the Medical Syndicate against four doctors involved in the case. 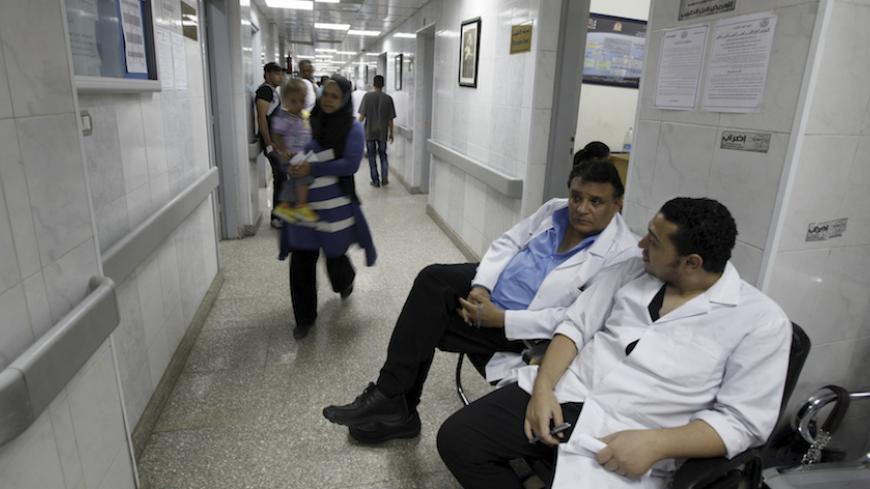 Doctors sit at the emergency reception area during a strike at Al-Moniera public hospital in Cairo, October 2, 2012. - REUTERS/Amr Abdallah Dalsh

An Egyptian Medical Syndicate internal investigative committee recommended the initiation of disciplinary action against four physicians found to have participated in promoting a device that treats patients with hepatitis C and HIV, prior to the completion of recognized scientific efficacy tests. In a July 18 statement published on its official website, the syndicate stated that the physicians deliberately caused harm to millions of Egyptians who sought treatment with the device, which the syndicate characterized as “dubious.”

On Feb. 22, 2014, the spokesperson for the Egyptian army had announced on his Facebook page that the engineering authority of the armed forces had invented a device to diagnose and treat hepatitis C and HIV, with the patent for this device registered after receiving approval from the Egyptian Ministry of Health.

On that same day, the official Egyptian TV channel aired a public service announcement produced by the armed forces that theoretically explained the functioning of the virus detecting device and confirmed the invention of the virus-killing device dubbed the CCD, which it described as the scientific culmination of 10 years of research that was achieving great results during trials on patients infected with hepatitis C and HIV. The announcement included interviews with people who said that they were completely cured after receiving treatment at hospitals run by the armed forces.

The research team set June 30, 2014, as the date for treatments to begin at the armed forces' hospitals for millions of Egyptians infected with hepatitis C. But prior to that date, the engineering authority announced that further research would be conducted for an additional six months before treatments would start. Thus, talk about the device waned and the second deadline expired. In the meantime, Egypt announced the importation of a drug called Sovaldi, which would be given to the 7% of Egyptians who are infected with the hepatitis C virus, according to statements by Egypt’s Minister of Health Ahmed Emad El-Din Rady.

“The Brotherhood controls the Medical Syndicate’s board, and the decision is linked to the latter’s row with the state,” such was the explanation given by gastroenterologist Ahmed Mouanes in regard to the board’s decision to refer him to an internal disciplinary committee. Mouanes said that tests on the device were ongoing and refused to view the syndicate’s decision as an indication of the device's failure.

Mouanes affirmed his eagerness to appear before the disciplinary committee and submit new evidence — the nature of which he refused to disclose to Al-Monitor — that proves the efficacy of the device in treating patients with hepatitis C and HIV.

The relationship between the Medical Syndicate and the government has been tense since February — for, after police officers assaulted physicians at the El Matareya Educational Hospital in Cairo, the syndicate held a meeting of its extraordinary assembly, in which it decided to go on a partial strike throughout the country and refrain from providing paid services to citizens in public hospitals. It also requested the resignation of the minister of health, who filed a lawsuit before administrative courts to halt the implementation of syndicate resolutions, with this case remaining unresolved.

In this regard, the chairman of the syndicate's ethics committee, Tarek Kamel, told Al-Monitor that the syndicate’s decision was not political, but purely professional. He affirmed being against the politicizing of any syndicate internal matters.

Kamel said that the committee that investigated the hepatitis C and HIV treatment device leveled ethics-related charges against the four physicians, because they promoted the device prior to it being subjected to standard scientific testing and its approval for treatment by the Egyptian Ministry of Health. He emphasized that these physicians misled millions of Egyptian patients, and that the four physicians were subject to penalties ranging from a temporary prohibition to practice medicine for up to one year, to the revocation of their syndicate credentials and a complete ban on practicing medicine.

“Referring the physicians to the disciplinary committee came after reviewing the statements that they made to the media about the device,” Kamel said. He added that, in 2014, the syndicate had opened an investigation into complaints submitted by physicians and ordinary people against those who promoted the device. The investigation was prematurely halted, but reopened seven months ago with the investigative committee that he chairs, finding four physicians guilty of promoting the device and acquitting five others who discussed using the device when making diagnoses.

“I am a gastroenterologist and I know nothing about this device,” Mujahid said. He added that the hospitals in question currently rely on a regimen of new drugs to treat hepatitis C, most prominent among them Sovaldi. He also denied the existence of any HIV treatments in Egyptian hospitals.

However, in April, Maj. Gen. Al-Sayed Nasr, the governor of Kafr El-Sheikh, one of the governorates located in Egypt’s delta, stated during a campaign promoting early detection of the disease that the Kafr El-Sheikh Military Hospital utilized a device to diagnose hepatitis C. He added that the device was 100% accurate, a statement confirmed by Lamis El Madawy, the deputy minister of health in the governorate.

A source within the research team evaluating the hepatitis C and HIV treatment device refused to acknowledge the failure of the device. He told Al-Monitor on condition of anonymity that the team was waiting for the results of the investigations being conducted by the Medical Syndicate, and affirmed the existence of what he called sovereign orders compelling the research team not to discuss details pertaining to the device.

The source addressed what he characterized as the slow death of patients suffering from hepatitis C due to the use of Sovaldi. He said that the ministry’s adoption of the drug for treatment was but part of the corrupt nature of the ministry, for, according to him, the condition of numerous patients deteriorated after they began taking doses of the drug.

Gastroenterology professor at Mansoura University Gamal Shiha denied the existence of any negative impact due to drugs used by Egyptian hospitals, such as Sovaldi, in the treatment of hepatitis C. He stressed that cure rates using this drug exceed 90%.

Shiha told Al-Monitor that the program adopted by the Ministry of Health to eradicate hepatitis C with new drugs had cured 300,000 Egyptian patients in 2015. He expects that number to reach half a million individuals this year and said that the virus-killing device was not part of the ministry’s plan because “there was no scientific basis for its use.”