Egyptian pharmacists have accused the ministry of distributing an unapproved drug to hepatitis C patients and violating drug importation, registration and trade regulations. 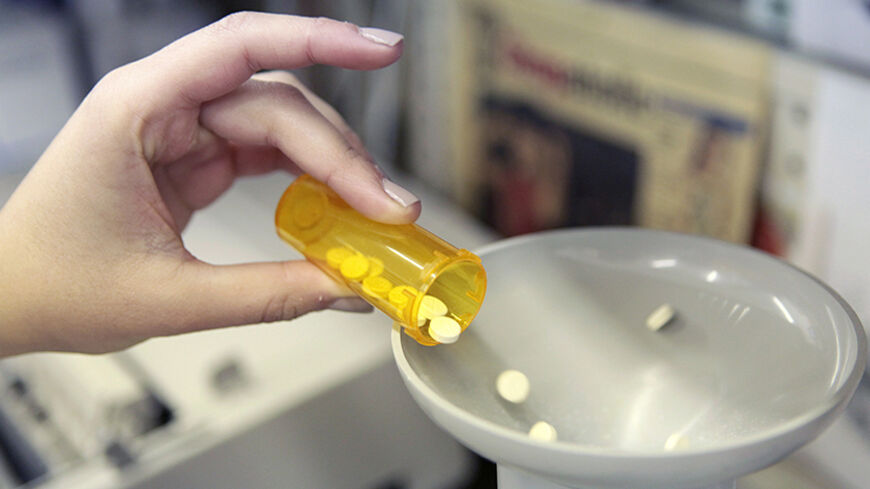 A pharmacy employee dumps pills into a pill counting machine as she fills a prescription. - REUTERS/Lucas Jackson

CAIRO — The Egyptian Health Ministry faces accusations by the Syndicate of Pharmacists, a number of pharmaceutical companies and medical professionals of exploiting Egyptians afflicted with the hepatitis C virus (HCV). The patients allegedly have been used to test a new drug, Sovaldi.

A major dispute arose between the Syndicate of Pharmacists and the Egyptian Health Ministry, after it was revealed that the active ingredient in this drug has yet to be approved. Thousands of patients had applied to the ministry to obtain the drug, which was indeed provided to them by the ministry and distributed for sale in major pharmacies in Egypt. The ministry also faces charges of violating the terms of the importation, registration and trading of this drug.

Syndicate of Pharmacists spokesman Mohamed Saudi told Al-Monitor: “Experiments were conducted in the US on only 28 cases of patients with HCV genotype 4, and Egypt conducted experiments on only 100 cases. These numbers are statistically insufficient to use this drug on millions of patients with this type of hepatitis.”

Saudi confirmed that the syndicate's board of directors is looking to take legal action against the Egyptian government. It will also file a complaint with the Egyptian public prosecutor after it is certain that US manufacturer Gilead let patients sign a waiver to receive the treatment, as approval to be experimental subjects. The patient who refuses to sign the acknowledgment is denied the drug. He explained that it's permissible in the United States for a patient to receive money in return for taking part in research experiments and that this is a protocol applied in many countries.

Saudi indicated that the Health Ministry forces patients to undergo medical tests at a cost of approximately 1,800 Egyptian pounds ($251) to assess their condition and eligibility for the treatment. He pointed out other illogical practices, such as when three doctors tested the drug in Egypt and were allegedly covered by an insurance policy worth $3 million. He said that the doctors experimenting with the drug are themselves members of the Supreme Committee for Hepatic Viruses and Dr. Wahid Doss, the head of the National Committee for the Control of Viral Hepatitis, is handling negotiations with Gilead.

“Is this logical, while there are international conventions ratified by Egypt such as the Agreement on Trade-Related Aspects of Intellectual Property Rights, which states that in the event of an epidemic outbreak, the Egyptian government may sign an agreement with the manufacturing company to produce the drug in Egypt?” asked Saudi. He said the syndicate considers the importation of the drug a waste of the public money, as Egypt can negotiate with the US companies on its patentability and possibly manufacture it there. The state potentially lost millions of Egyptian pounds by not doing so. Meanwhile, some countries, such as India, Sudan and Pakistan, won the right to produce the Sovaldi.

He added, “Even though the price of this drug is still high and it is not sufficiently supplied to all patients, the state imported 225,000 packs to meet the needs of 50,000 patients, while there are two million registered patients who have already been diagnosed, in addition to nearly eight million undiagnosed patients. This number increases by 180,000 patients a year, which makes this insufficiency a constitutional violation, according to the Egyptian constitution … which provides for the right of treatment for all citizens without discrimination.”

Saudi requested that Al-Monitor relay the request of his syndicate members and medical experts in Egypt to US researcher Dr. Raymond F. Schinazi, the inventor of Sovaldi, to hold a seminar with the syndicate to answer the pharmacists’ queries about this drug.

Dr. Mohammed Ali Ezz Al-Arab, he head of the oncology unit at the National Liver Institute, told Al-Monitor: “If the drug is administered for treatment purposes and not to complete the experimental research conducted on Egyptians, a sheet separate from the treatment registration form should have been included, on an optional and not mandatory basis, and the patient must have the choice to subject his test results to research. It is understood by all scientific conventions and principles that the patient subject to experimental research shall not bear the cost of the drug, and the whole scientific experiment conducted on the patient, who signed the acceptance form by his own free will, must be examined by scientific research ethics committees. Egyptian patients, in accordance with the acknowledgment they signed, will be subject to research experiments at their own expense and at the expense of the state.”

As for the government's opinion on the charges, Doss said in a phone interview with Al-Monitor: “The drug is registered and is sold in the United States. It was subject to experiments in three centers in Egypt, after 60 — not 38 — experiments conducted on Egyptians in the United States. This drug became FDA-approved in December 2013 and was also approved in Europe as well.”

Doss bashed pharmacists who refused to administer this new treatment in Egypt, saying: “They gain profits from liver patients in Egypt. They were supposed to encourage us … to bring this treatment to Egyptian patients at a very low price — $300 — while the estimated price of the drug in the US is $28,000. They wanted the drug to be distributed and sold in pharmacies to reap profits. Their allegations will be proven false in the near future.”

Doss denied the $3 million insurance policy allegedly granted to the doctors who have tested the drug, saying, “This is not true. The policy was given to patients subject to the research experiments and not to me nor my fellow doctors. Our names were mentioned in [the policy] in our capacities as doctors supervising the research.”