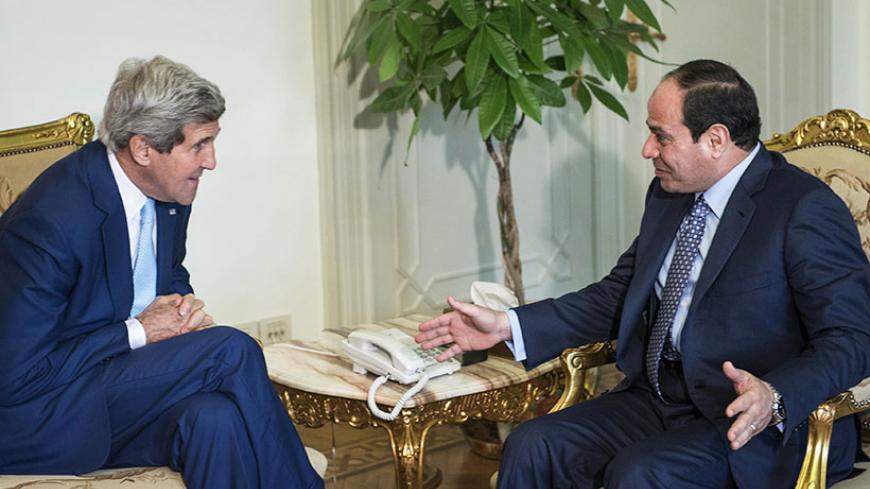 Egypt's President Abdel Fattah al-Sisi (R) and US Secretary of State John Kerry talk before a meeting at the presidential palace in Cairo, June 22, 2014. - REUTERS/Brendan Smialowski

On Egypt’s domestic scene, President Abdel Fattah al-Sisi is being lauded as an early-rising drill sergeant demanding 24/7 performance from a newly efficient and energized government. And in the foreign policy arena, a re-empowered Egyptian presidency is also moving beyond both the somnambulant legacy of the later years of the regime of deposed President Hosni Mubarak and the abbreviated and contentious era of deposed President Mohammed Morsi.

Nowhere is this new look in Egypt’s foreign activism more evident than on Syria. Days before Sisi’s election, a delegation of Syrian opposition figures assembled in Cairo at the invitation of Foreign Minister Nabil Fahmy. Syrian opposition figures are scattered throughout the region, but in Cairo the only permanent resident for many months has been Haytham Maleh, a peripheral player in the Syrian scene.

Those invited to Cairo, however, included former National Coalition for Syrian Revolutionary and Opposition Forces leader Moaz al-Khatib, writer and activist Haytham Manna, economist Aref Dalila, former Foreign Ministry spokesman Jihad Makdissi and film producer Jamal Suliman. These figures are not represented among the exiles of the Syrian National Coalition and their interests set them apart from the organization and its sponsors. None are close to the Muslim Brotherhood and all advocate a far more nuanced approach to the regime of President Bashar al-Assad based on political engagement, an idea shunned by the “official” opposition but which has grown in importance over the last year.

The presence of such personalities in Cairo at Sisi’s invitation offers clear evidence that a reinvigorated Egyptian presidency is seeking to make its mark in Syria and beyond.

Egyptians believe that the precedent established by Sisi’s emergence out of the uncertainty of the Arab Spring will resonate far beyond Cairo — as developments in Cairo always have — to include Damascus, where another relatively young and militantly secular president whose political roots were established in the 1950s and who, like Sisi, faces a sectarian insurgency, has also just been re-elected.

The emerging narrative of the Sisi era is at odds, however, with the declared US interest in political inclusiveness and a more forgiving domestic political environment. US Secretary of State John Kerry’s short surprise visit put these dueling interests in sharp relief.

But Sisi’s views fit far more easily into a consensus in both Cairo and Damascus that distrusts civilian politics and Islamists of all stripes and favors the powers exercised by a “strong state.”

To the new Egyptian president, challenges to regime power in places as far afield as the Sinai Peninsula and the ungoverned spaces of Libya and Syria all share a similar character and merit a similar Egyptian response. They are sectarian, radical and steeped in terror, energized by shadowy foreign forces that want to destroy the achievements of half a century of military rule. They must be crushed without mercy.

According to MENA, Sisi welcomed efforts to confront jihadist insurgents in the region through collective effort, saying that Egypt has always called for unifying international efforts in this regard.

Despite its disputes with the regime, even Washington has made its peace with this development. According to a New York Times report following Kerry’s Cairo visit, the Barack Obama administration “is now ready to work with another military-backed strongman.”

Egypt’s interest in Syria, unlike that of Qatar or Prime Minister Recep Tayyip Erdogan’s Turkey, does not spring from a desire to establish a “Sunni crescent” in the heart of the Arab Mashreq, nor certainly from any desire to enhance a Saudi or Iranian role in the region.

Instead, Sisi looks to Syria as a concrete expression of the resurgent power of Egypt to reclaim a central role in Arab affairs on a basis that will enhance Sisi’ s and Egypt’s role and legitimize his mandate to rule.

Egypt has always maintained a certain distance between warring Syrian parties. For example, it kept a diplomatic presence in Damascus even after Morsi announced his opposition to Assad.

In recent times, it has become commonplace to denigrate Egypt’s ability to act effectively in Syria — or anywhere. Preoccupied for years with political instability, an economic crisis and a domestic insurgency and hobbled by a sclerotic leadership, Cairo even today is viewed as simply unable to punch according to its historical weight on a broad range of Arab and Muslim issues.

“Assad wants to be a partner [with Egypt] in the war against terror," explained a former Syrian diplomat now in the opposition. "My understanding is that Egypt is so busy in its domestic affairs, they do not yet have strong and respected leadership” and therefore no time or energy to deal with Syria.

Yet, Sisi’s election marks the revival of the power of the Egyptian presidency — an institution that has always been critical to establishing effective Egyptian leadership in Arab affairs.

Fahmy's efforts have gone a long way toward rehabilitating and broadening Egypt’s regional and international ties, setting the stage for a more decisive Egyptian re-entry into Syrian affairs based in part on an understanding that the challenges besetting Cairo, notably a militant jihadist insurgency, are shared Arab concerns.

It is far too soon to suggest, as some commentators have, that Egypt’s moves in Assad’s direction thinly mask a Saudi demarche. Such a view underestimates the continuing vehemence of Saudi opposition to the Baath regime and both Egypt’s growing interest in Syria and its ability and readiness to act independently on the Arab stage.