Mubarak’s death signals the end of an era in Egypt

Egyptians were divided over the funeral held for former President Hosni Mubarak. 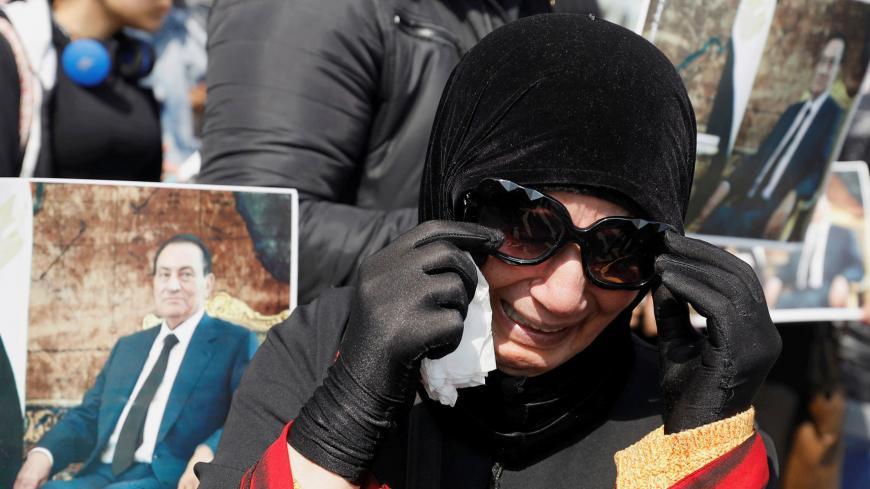 A supporter of former Egyptian President Hosni Mubarak reacts at a gathering near the main gate of a cemetery during his burial ceremony, east of Cairo, Egypt, Feb. 26, 2020. - REUTERS/Mohamed Abd El Ghany

CAIRO — Egyptians finally saw the end of former President Hosni Mubarak, nine years after he was deposed in the 2011 Arab Spring. At the age of 91, Mubarak died while in a hospital Feb. 25.

The office of President Abdel Fattah al-Sisi mourned Mubarak “as one of the leaders and heroes of the glorious [1973] war [with Israel].” The government declared three days of mourning nationwide.

The country’s military also mourned the death of Mubarak, “one of its sons and one of the leaders of the glorious … war.”

In the presence of government officials, Mubarak was given a military funeral with full honors at a mosque in an eastern New Cairo neighborhood. Officials extended condolences and shook hands with Mubarak’s two sons, Alaa and Gamal, and his widow, Suzanne.

A few dozen Mubarak supporters gathered at the mosque early Feb. 26, wearing black and carrying posters of the former president.

President Sisi’s approval of a military service for Mubarak stirred up controversy, particularly on social media, with many arguing that Mubarak doesn’t deserve a military funeral, legally or politically, because he was deposed in 2011 and convicted of corruption.

​“It is illogical,” Abdel Azim Hammad, political analyst and writer, told Al-Monitor. He said a military funeral with honors was “against the constitution, which glorifies the January 25 Revolution” that ousted Mubarak.

He said such a funeral shouldn’t have been held, given the poor state of Egypt after nearly three decades of Mubarak's rule.

“He was the extension of a system that has existed since the Free Officers declared in 1953 that the monarchy was abolished and a republic system would take its place, and he doesn’t have political visibility or goals,” Hammad said.

Born in May 1928, Mubarak became president in October 1981, when Islamist extremists killed late President Anwar Sadat at a military parade commemorating the 1973 war.

But lawmaker Mohamed Abu Hamed said the criticism of honoring Mubarak with a military funeral was “unfair.”

“Mubarak deserved to have a military funeral, because of his background as a former president and one of the old leaders of the Egyptian military,” he said.

Abu Hamed said Mubarak had “many positives at the beginning of his rule and kept Egypt stable throughout his reign. … Also he stepped down from power peacefully in 2011 without transforming it into the fate of Syria and Libya.”

Mubarak was forced to resign amid massive protests against his autocratic rule. He resigned after an 18-day uprising, transferring power to former Defense Minister Mohamed Hussein Tantawy, who led the military council after Mubarak's ouster in 2011.

Mubarak faced charges related to the killing of over 800 people in the protests. He was sentenced to life in prison along with his security chief, but he was cleared of the charges. He was then convicted of corruption and sentenced to three years.

Mohamed Zaree, a human rights activist with the Cairo Institute for Human Rights Studies, said the funeral proves that Sisi’s regime is an extension of Mubarak’s.

He compared the government’s reaction to Mubarak's death to that of President Mohammed Morsi last June, when he collapsed in a courtroom.

“They did not issue even a statement on Morsi’s death,” he said.

In 2013, the military removed Morsi from power amid nationwide protests against his divisive rule. Sisi was elected president the following year.

“We are busy with the current situation, which has become worse under Sisi’s rule,” Zaree said. “That has made people put Mubarak's legacy aside.”

Three days before Mubarak’s death, his sons, Alaa and Gamal, were acquitted of illicit trading during the sale of a bank four years before the 2011 uprising.

The ruling raised questions about the future political roles of the two men, in particular Gamal, who was the heir apparent to Mubarak.

“Gamal was one of the reasons for the January 25 Revolution, and [he] is still reviled more widely than his father,” Zaree said.

Gamal Mubarak amassed power during the last decade of Hosni Mubarak's rule. Hosni Mubarak appointed his son as a deputy secretary-general of the National Democratic Party in 2006, and included him in diplomatic missions. Gamal's policies assisted top Egyptian businessmen amid rumors of corruption.

Yet, despite the popular criticism of Mubarak, a number of countries — from Saudi Arabia and the United Arab Emirates to Israel — expressed their condolences. Saudi Crown Prince Mohammed bin Salman conveyed his "heartfelt condolences" in a message to Sisi, while Israeli Prime Minister Benjamin Netanyahu said he will "continue to follow" the path of his "personal friend."